What began as a few days of sustained losses for the S&P 500 now borders a full-scale correction with the index down just under 10% from its peak. With its close at 2,658 on Friday, the S&P 500 forfeited all year-to-date gains. Despite the continued sell-off, exchange traded funds that track the main indices realized net-inflows for the week. 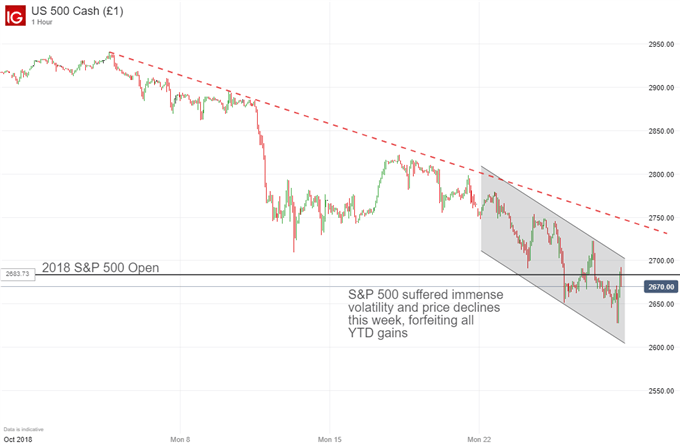 In total, the three ETFs saw $2.2 billion in inflows. While rather insignificant relative to their cumulative market capitalizations, the flows are noteworthy given the market’s climate. This week saw four of the five trading days close red with substantial losses on Wednesday and Friday. For the month of October, Thursday marked just the fourth green close. With that in mind, Thursday’s inflow of $4.1 billion is evidence that at least some investors remain optimistic.

Optimism in the equity market may be waning but opportunities to generate more are abound. This week in particular had key earnings in the second and third largest US corporations by market cap, Amazon and Microsoft. The reports presented an excellent opportunity to help stage a broader rebound if the results impressed. Further, this could have contributed to Thursday’s inflows if some investors bet strong earnings would mark the bottom of the dip. Unfortunately those who wagered on such a result were left out to dry with both the mega-cap tech companies missing forecasts. 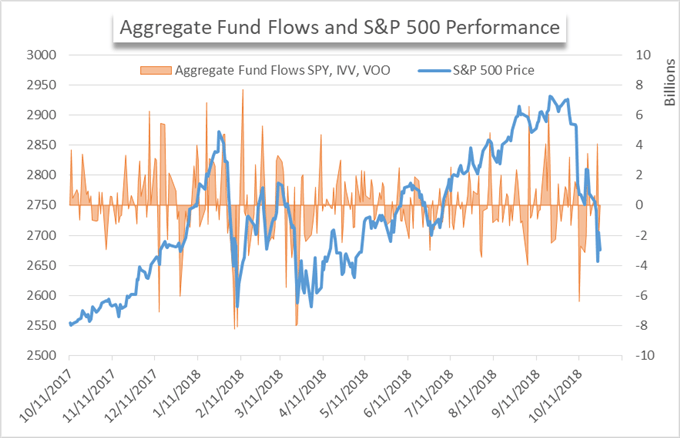 Still, earnings season presses on. Next week Apple is accompanied by Ford, General Motors, Daimler and Exxon. Investors will now look to these key earnings to help spur a rebound or at least create a floor for equities.

Another noteworthy earnings season development is the upcoming conclusion of the blackout period. Buyback “blackout periods” are enacted by firms to stall the repurchase of shares around earnings. Once they report earnings, the period is lifted shortly after and their repurchase plans can be carried out. Roughly one-third of companies listed on the S&P 500 reported earnings this week which means next week a substantial amount of capital will be able to enter the buy-side of the equity market.

In May, Apple alone announced a $100 billion share repurchase program. While the program can be carried out over a range of months, the recent sell-off has resulted in relatively cheap share prices which may prompt corporations to accelerate the rate at which they repurchase shares and provide buoyancy for the equity market. Apple is due to report earnings next week. 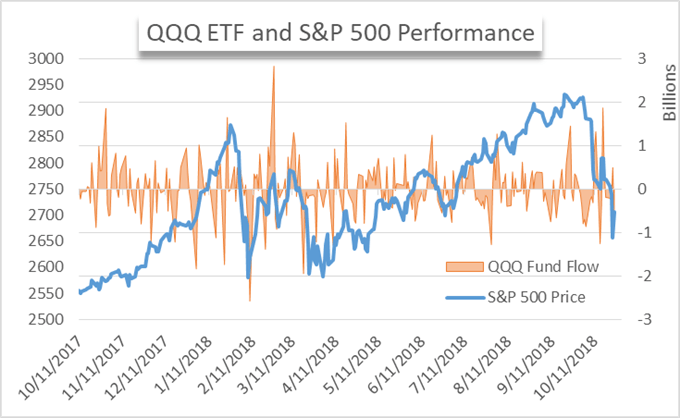 In contrast to IVV, SPY and VOO, the tech-tracking QQQ ETF saw outflows this week. While the net-flows totaled a minor $545 million, the flows suggest demand for tech seems to be waning. However, a trend would first need to materialize before such a conclusion could be asserted. 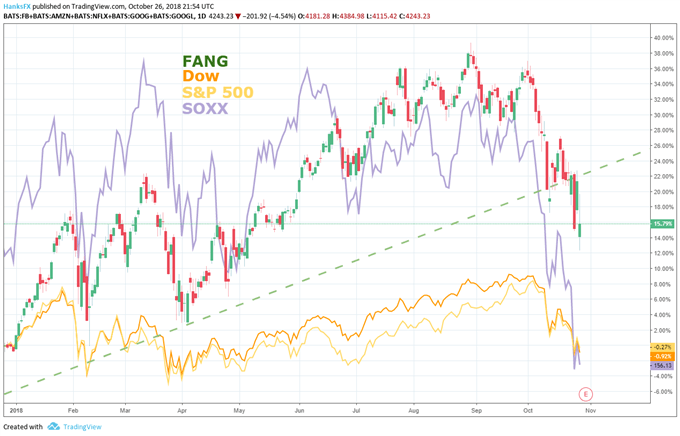 That being said, the precipitous decline witnessed in the FANG and semiconductor sector point to trouble for tech if only on the surface. The iShares PHLX Semiconductor ETF (SOXX) is a fund that tracks the largest domestic semiconductor manufacturers. At one point in the year, the semiconductor sector was one of the best performing but in a matter of days now finds itself a laggard versus the broader market baskets.

Next week offers a litany of events on the economic calendar. Among them are rate decisions from the Bank of Japan and the Bank of England. GDP figures from Canada and Mexico are also scheduled and could provide some bullish momentum if they offer similar surprises to that of the United States Q3 GDP.