The third week of October continued to offer significant volatility for equity markets. This week saw large intraday swings as bears and bulls weighed a number of fundamental themes that could impact the longer-term outlook for individual shares and indices as a whole. 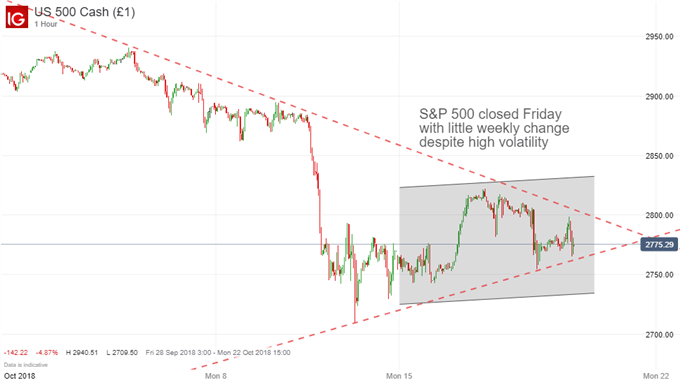 Despite the volatility and large price-swings, demand (as gauged by fund flows) for the three exchange traded funds (ETF) I have been covering remains near neutral. This week saw a meager $87 million leave the three funds. With average daily flows numbering in the billions for each, a net weekly change of $87 million is not a sign there has been a significant shift in sentiment. In fact, it could be argued the effectively neutral flows for the week are evident of very differing opinions between investors. 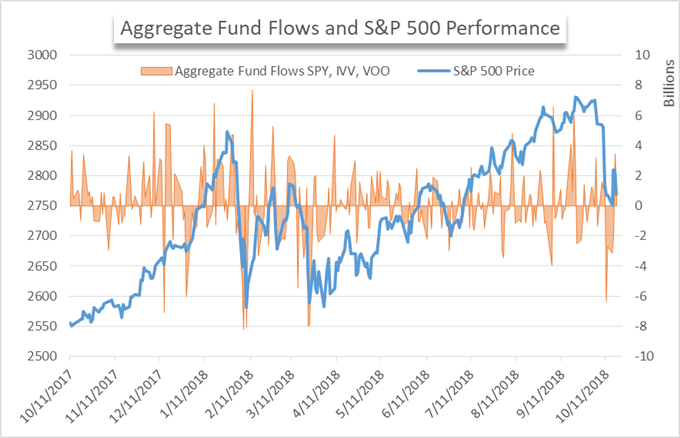 On a larger scale, the fund flows for October have also been very moderate. To date, the aggregated net fund flows is a withdrawal of $348 million. Again, such a small net change in a month that has offered significant volatility is quite remarkable.

For added context, the aggregated fund flows for September saw an inflow of $10 billion. Similarly, the average daily flow was an inflow of $527 in September versus an outflow of $24 million in October to date. The deadlock between bears and bulls falls in-line with the broader fundamental themes equities face.

On the bearish side, a slew of geopolitical battles between allies has stunted any serious rebound with follow-through. The United States and Saudi Arabia remain locked in an investigation that could rupture economic ties and prove troublesome for many US corporations. Elsewhere, the Italian government and the European Union have been unable to reach an agreement on the Italian budget as the latter threatens the stability of the bloc.

For bulls, a generally positive earnings is the driving factor. Netflix reported earnings this week, shattering expectations and subsequently climbing. FANG members and tech behemoths, Amazon and Google are also due to report next week. With more FANG earnings on the horizon, the NASDAQ-tracking QQQ ETF offers insight to investor sentiment on the tech group. 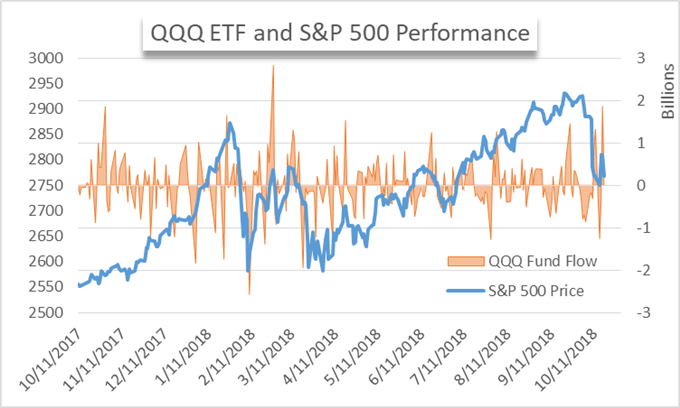 According to fund flow data, this week saw $614 million flow into the QQQ ETF. With a market capitalization in the $750 billion range, outstanding Netflix earnings seem to fall short of a convincing bullish case for QQQ speculators. The inflows could be impacted by simple profit taking from the Netflix earnings, but rather unlikely because of the broad holdings of the index.

Last week, rising bond yields were one of the headline factors behind the equity rout. Unsurprisingly, the high yield corporate bond ETF (HYG) took a serious hit and saw funds move elsewhere. This week as other fundamental developments eclipsed rising yields, investor appetite for HYG seems to have reemerged. 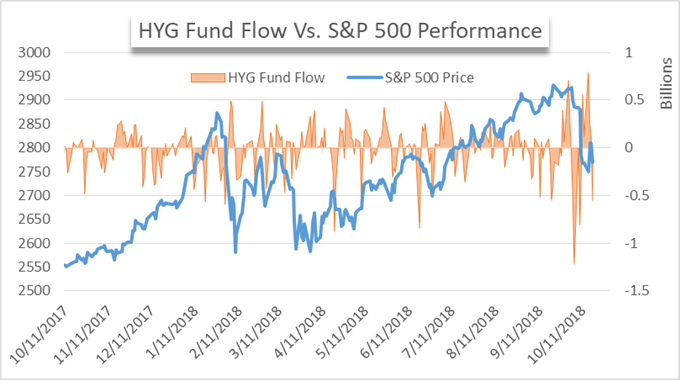 To Thursday the 18th, the week saw $596 million re-enter the fund. Consequently, the fund has regained some ground after it surrendered a substantial amount of capital last week, punctuated by the fund’s single worst day of outflows on record at $1.2 billion.

The change of fate for HYG showcases how quickly factors influencing the markets can shift. Further, both the QQQ and HYG ETFs are considered ‘risk-on’ assets which could suggest investors are simply looking for a bigger dip to buy. At its current valuation, investors may stray from QQQ and favor the relatively cheaper HYG.

In the week ahead, a sparse economic calendar will leave equites looking to corporate earnings and the resolution of geopolitical tensions. On the back of Amazon and Google earnings, QQQ will likely see significant flows given their substantial market capitalizations and allocation within the fund.