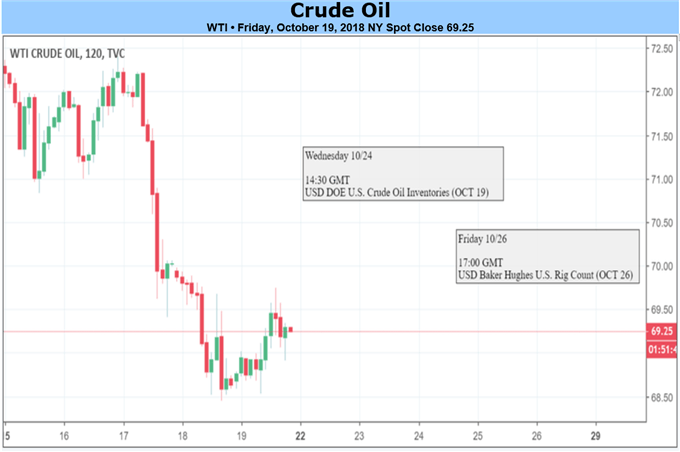 Crude has been on a bumpy ride since late May, but ultimately, it looks to be moving higher with fundamental tectonic plates potentially shifting. Traders are looking to conflicting forces that show short-term fear of further downside volatility while the possible forces remain for much more aggressive upside potential.

In addition to increased inventory in the US that may be showing demand is waning, traders are concerned that a tightening Fed will hurt demand while trade wars may have impacted Chinese GDP overnight that missed expectations when it came in at 6.5% vs. 6.6% and signs are emerging that Saudi Arabia is increasing production to more than makeup for pending Iranian sanctions and depleting in Venezuela.

Don’t count the oil bulls out just yet. Action in the options pits showed a jump in volume of Brent call options that would pay out if the global benchmark were to rise by $70 at expiry in January to trade at $150/bbl. While some would say this is absurd, and such a move would naturally knock the global economy off any horse that it is currently riding on (as we say in Texas,) it’s also worth noting that this is a calculated bet.

The argument for this coming into play likely plays off the threat from Saudi Arabia, the de facto head of OPEC that they would weaponize their oil supply that the world relies upon.

While concerns remain about US monetary policy, global economic growth, and now crude oil supply, the historical pattern of rotational leadership in capital markets tends to see commodities lead the final charge before a recession takes place as inflationary concerns and growth see its final light of day. If that holds true, on Thursday, JPMorgan noted that they see more than a 60% chance that the US will tip into a recession over the next 24-months based on a slew of macroeconomic data.

If this proves true, a recession is nigh, and the historical patterns of market rotations holds that bonds continue to fall (yields higher), stocks have lost their luster (they likely should if growth concerns are valid and seniority claims favor debt holders,) then we may yet to see crude’s top, and that is without the potential negative supply shocks of oil wars developing between Saudi and US, the two global oil supplier superpower.

Despite the Impressive Sharp Pullback, WTI Trails a Familiar Path

WTI crude seems to be trading within a well-defined rising channel as visualized by Andrew’s Pitchfork that is drawn off key pivots in 2015-2016. Technical traders may appreciate that the range between the quadrants of the Andrew’s Pitchfork shown above is $8.75/bbl. The price for WTI crude does not hold perfectly within the ranges, but does appear to honour the ranges, and continues to do so, which currently sits between $65 and $73.25.

Over the years, I’ve learned to look for common patterns that the market trades within, and what behaviour price action exhibits as bullish and bearish headlines fly at crude oil.

As mentioned at the top, the price has traded lower toward the median line that has held price up since Q2 2018 while MACD (5, 34, and 5) looks to show a possible buying opportunity as every dip to negative territory on MACD has preceded a break toward the top of the range that is currently near $73 with the upper parallel line at ~$82.5.

Traders should look to higher support levels of $66.75/bbl and $64.90/bbl, the lower which is highlighted on the chart above as possible checkpoints for a bullish trend resumption.

Only a break below both of these zones would argue that risk sentiment may be too much for the crude bulls to withstand for now, and traders may want to confirm such an assumption against gold, which would likely be moving toward $1,250 on such a development of risk-off spreading unless the US Dollar has become a weapon of strength again.