How Can China GDP Impact the Australian Dollar and S&P 500 Index?

Join our Chinese GDP data live webinar coverage as we cover its impact on the Australian Dollar and stocks (Begins 10/19 at 01:45 GMT)

Early Friday morning on October 19th, China’s third quarter GDP data, along with other key measures of domestic economic performance, will cross the wires. It could carry immediate and lasting consequences for FX and stock markets. Compared to Q2, economic growth is expected to slow to 6.6% y/y from 6.7%. Industrial production is also anticipated to weaken to 6.0% from 6.1% while retail sales remains unchanged.

According to the Citigroup Economic Surprise Index, Chinese data has been tending to underperform relative to economists’ expectations since June. Albeit, this has been by a shrinking margin since then. Still, this does open the door to a downside surprise as it seems forecasts have been too optimistic as of late. If GDP does slow to 6.6% or beyond, this would be the weakest reading since Q1 2009 which was 6.4%.

This would also follow the trend of weakening global growth, excluding the United States as of Q2 2018, that has been a pattern in most developed nations when looking at the chart below. This comes at a time when credit conditions are broadly tightening thanks to the Federal Reserve, which has raised rates over two percentage points since it began increasing them back in 2015. 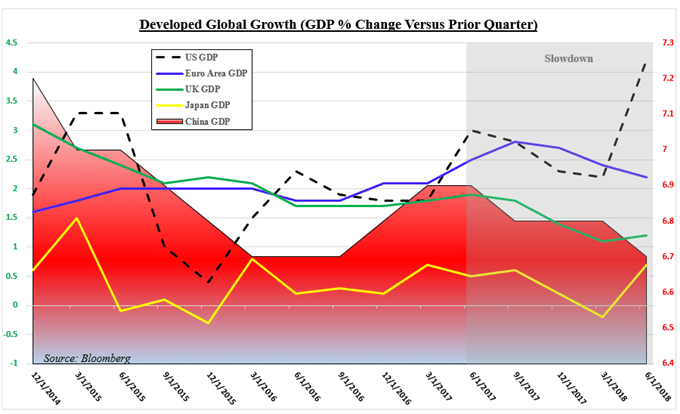 Trade wars have taken a toll on emerging markets this year. The Trump administration passed 10% tariffs on roughly $200b in Chinese imports back in September. Come 2019, this rate will jump to 25%. Despite this, the world’s second largest economy kept financial market liquidity depressed as the country prioritized stabilizing debt levels. The Shanghai Composite has as a result declined over 28% since late January.

You can get a glimpse of the impact of the US China trade wars, as well as a stronger US Dollar, on investors’ confidence by taking a look at the MSCI Emerging Markets Index below. Even if you take China out of the picture, developing nations’ stock markets have been underperforming aggressively this year.

Emerging Markets Index, With and Without China 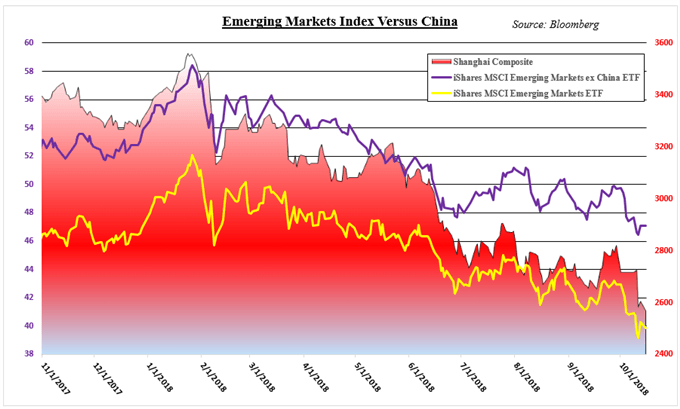 This also speaks to how a slowdown in China can impact not just domestic markets, but external ones as well. Besides developed nations, in the ASEAN bloc region: Malaysia, Indonesia, Singapore and the Philippines all have key trading relationships with China. You may check out our infographic if you would like to learn more about the history and impact of trade wars.

With that in mind, should we see Chinese GDP data disappoint in Q3 and beyond, the Australian Dollar may reverse some of its upside progress against its US counterpart as of late. This is because of the potential knock-on effects for Australia given that China is its largest trading partner. In fact, looking at the next image below shows how AUD/USD has tended to respond to Chinese economic updates over the past 10+ years. 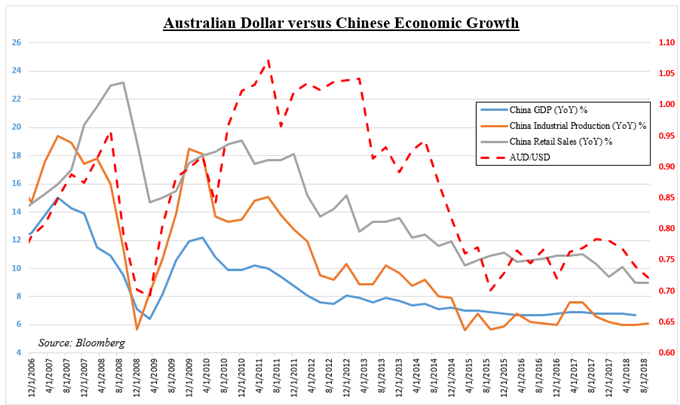 Risk aversion may also accompany weakness in the Australian Dollar should the data disappoint. Even if GDP is in line with estimates of 6.6%, it would continue to support the picture that global growth is generally slowing. The IMFcut forecasts in its most recent World Economic Outlook for the first time since July 2016.

With stock markets vulnerable to a combination of Fed rate hikes, trade wars, emerging markets and more, weaker Chinese GDP could be another item that fails to alleviate some pressure off nervous investors. While this may not necessarily result in a stock market selloff in the near-term, there could be another one to come ahead that is partially fueled due to a slowdown in China.

This may also underpin the anti-risk Japanese Yen as the pro-risk New Zealand Dollar reverses gains from a better-than-expected local inflation report. In addition, the S&P 500’s aggressive selloff witnessed in February and October could yet be reignited.