Even though we had a significant decline in global stock indexes last week, the US Dollar declined as its relatively new ‘pro-risk’ status seemed to have worked against it. On top of that, we did see some deterioration in the implied 2019 Fed rate path. In other words, the greenback failed to capitalize on its status as a safe haven given that it is essentially the world’s reserve currency.

This allowed some ASEAN bloc currencies to take advantage of USD’s weakness. We saw particular gains in the Singapore Dollar, which was bolstered by a relatively hawkish MAS monetary policy announcement as anticipated. The Philippine Peso also appreciated as local central bank Deputy Governor Diwa Guinigundo said that the BSP ‘won’t hesitate’ to further tighten to curb inflation. 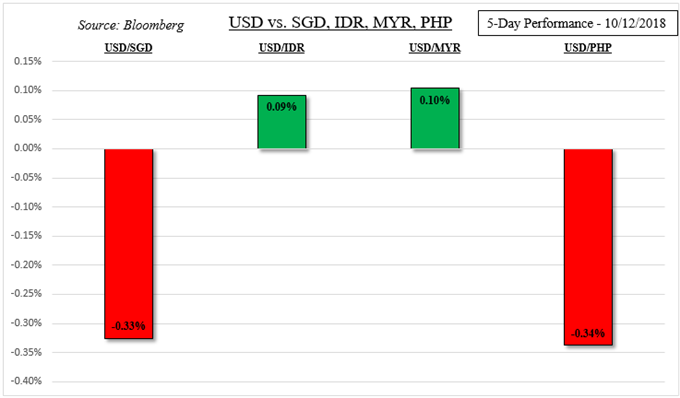 The Philippine central bank, as well as other nearby authorities, continue taking actions to stem selloffs in their currencies. On the USD/PHP daily chart, you can actually get a glimpse of what appears to be said intervention given the presence of numerous shooting star candlestick patterns. Depreciation in the Philippine Peso may have helped offer its country stronger export data this past week as well.

We will get Indonesian trade balance early this week, which may offer the same results given that USD/IDR is up over 14% since the beginning of this year. But arguably, the more critical economic event will be China’s third quarter GDP report due towards the end of this week. While China is a key trading partner for countries such as Singapore, Malaysia, Philippines and Indonesia, the data can have global consequences.

Lately, developing nations have been under pressure amidst tightening credit conditions, depreciating currencies and trade wars. The MSCI Emerging Markets Index (EEM) is accelerating well into bear market territory. Chinese GDP and industrial production is anticipated to slow down in the third quarter, just as the economy has been doing since 2008. 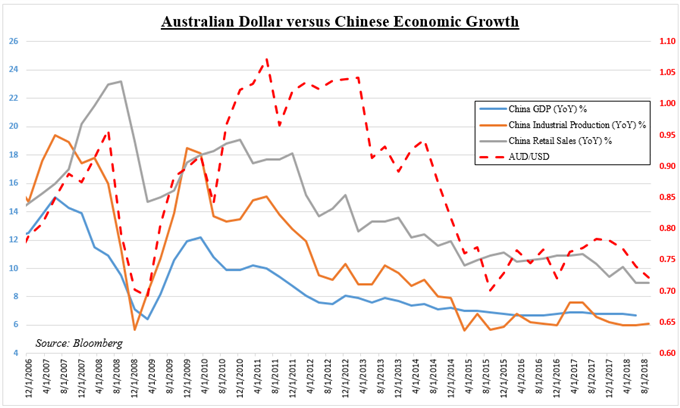 Signs of further weakness, ahead of the US advancing tariff rates from 10% to 25% on roughly $200b in Chinese imports next year, may keep increasing fears of global growth slowing. The IMF has envisioned such scenario for the road ahead. If China’s economy continues weakening, we may see the selloff resume course in markets which would bode ill for sentiment-linked FX such as the AUD, IDR, PHP and MYR.

There is also a risk next week for the resumption of US Dollar appreciation. The Fed may continue to reiterate its hawkish commitment despite the aggressive declines in the S&P 500, DAX and Nikkei 225. So do keep an eye out for commentary from Fed officials such as Lael Brainard, James Bullard and Randal Quarles. They may reignite December 2018 rate hike bets.