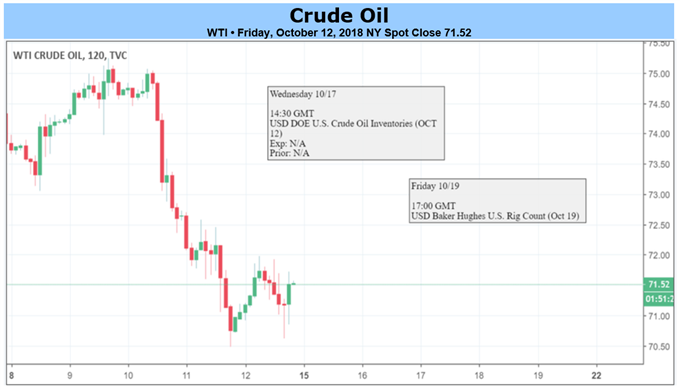 A dilemma appears to be arising in the crude oil market. A major agency, the International Energy Agency or IEA and THE cartel, the Organization of Petroleum Exporting Countries or OPEC have cut their demand forecasts for 2019, but that does not mean prices will fall.

How could this be? Supply is the short answer.

Supply drops and falling spare oil supplies appear to be a bigger concern than falling demand. In an interview this week, the executive director of the IEA, Fatih Birol said that ‘expensive energy’ is back and that if OPEC does not open the taps, the energy market may soon hamper global growth at a time when sentiment is already tipping lower.

To open Q4, Brent traded above $85/bbl while WTI traded above $76/bbl with much of the gains attributed to concerns on an increasingly tight market as US sanctions on Iran exports will leave the market wanting.

With the cut in demand forecasts, the IEA specifically noted that they see prices staying high, and in their report they noted that “this strain could be with us for some time and it will likely be accompanied by higher prices, however much we regret them and their potential negative impact on the global economy.”

Thanks to a jump in overall risk sentiment on Friday, oil was able to pare some of its weekly loss to nearly 3%. Once the current fears of negative global risk sentiment possibly telling of ominous times ahead that brought the NASDAQ down by as much as 4.57% over the last 5-days with the SPX500 dropping nearly 6% over the same period, oil investors will still look to dwindling supplies.

While commodity traders were likely focused on Gold this week as it saw the biggest jump since 2016 on the equities rout, the outlook for crude remains stronger. It remains to be confirmed on whether gold has broken its inertia of sluggish price action when it traded to a 10-week high at $1,226.4/oz. However, supporting fundamentals also look more stable for crude than gold, which needs increased risk aversion and ever-present inflation concerns, which does not seem like a safe bet.

Despite the Impressive Rise, WTI Crude Pulls Back at Familiar Place

WTI crude seems to be trading within a well-defined rising channel as visualized by Andrew’s Pitchfork that is drawn off key pivots in 2015-2016. The median line and internal mid-point between the median line and upper parallel have held prices in check while momentum also looks to have topped out in a similar region as highlighted with MACD (5, 34, and 5.)

This confluence of events that favor price returning to its rising range does not mean that price has topped permanently. Rather, traders should look to higher support levels of $70/bbl and $64.90/bbl that are highlighted on the chart above as possible checkpoints for a bullish trend resumption.

Only a break below both of this zones would argue that risk sentiment may be too much for the crude bulls to withstand, and traders may want to confirm such an assumption against gold, which would likely be moving toward $1,250 on such a development.