Last week seemed like a reckoning in the markets as the global economy continues to watch tightening credit conditions. Spurred after the Fed raised interest rates for a third time this year, US government bond yields touched multiyear highs, further pressuring emerging markets with large current account deficits. The MSCI Emerging Markets ETF experienced its most aggressive drop in months as the US Dollar soared.

Not surprisingly, the greenback experienced broad gains against ASEAN currencies. The most underperforming were the Indonesian Rupiah and Singapore Dollar on the table below. For the former, headline inflation cooled to 2.88% y/y in September from 3.20% prior. CPI remains within a comfortable range for the Bank of Indonesia which may have resulted in USD/IDR rising aggressively as expected. 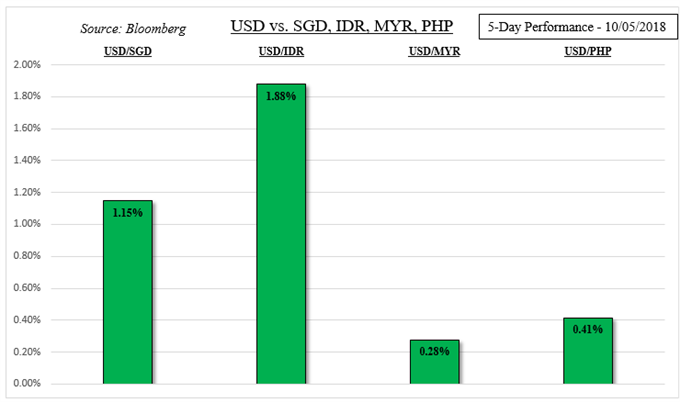 There was no shortage of local central banks taking aggressive actions to stem declines in their currencies. On the chart below, you can see Philippine foreign reserves declining to $75.2b in September which was the lowest since July 2011. Indonesian international reserves also declined to their smallest amount since November 2016. Meanwhile Philippine inflation increased, albeit slower than expected. 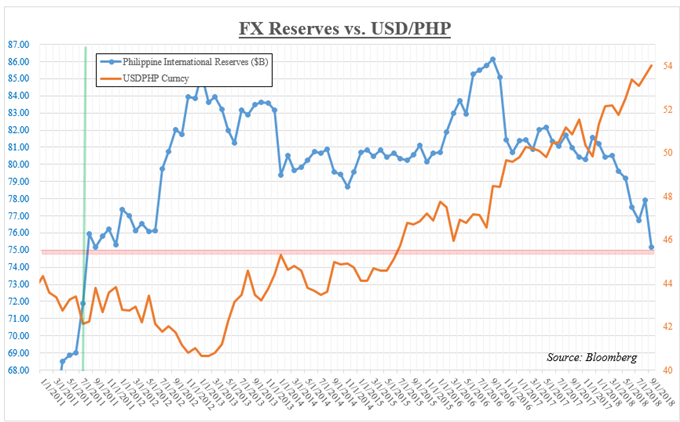 As for what we can expect in the week ahead, the Monetary Authority of Singapore announced that they will release their semiannual policy statement on Friday. Unlike conventional central banks, the MAS targets a trade-weighted exchange rate to slow or speed up the economy given Singapore’s reliance on the external sector which we have visualized below.

In their announcement from April, the MAS shifted their approach to a modest, gradual appreciation of the Singapore Dollar. Since then, USD/SGD rose over 5.5 percent as core inflation picked up to 1.9% y/y from 1.3%. A depreciating currency, particularly in Singapore, can put upward pressures to prices as imports become more expensive. Thus, the MAS may pursue further policy tightening, perhaps boosting SGD. 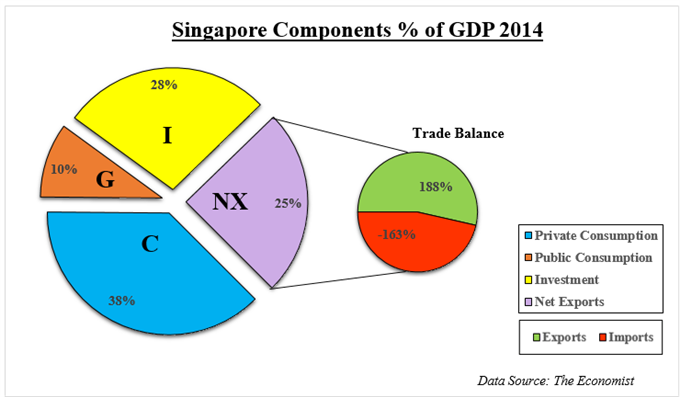 Outside of Singapore, the local region will see trade data from the Philippines. Export figures will be closely eyed given pronounced depreciation in the Philippine Peso since around the beginning of this year. Regardless of the outcome, the BSP is focused on inflation and maintaining stability in PHP. The central bank of the Philippines noted that inflation might have peaked, leaving the unit vulnerable to external developments next.

For Southeastern currencies and emerging market ones, all eyes are on the first round of the Brazilian presidential election. A victory for Jair Bolsonaro of the Social Liberal Party might see a temporary recovery in local stocks, but it would carry lasting consequences. Market mood may fall apart later if the IMF reiterates concerns about global growth from their World Economic Outlook.

In addition, there could yet be a rise in trade war developments between the US and China in the near-term after it was discovered that numerous local tech firms were impacted by a Chinese microchip attack. The US Dollar could also find gains if local CPI data tops estimates. Domestic economic news flow has been tending to outperform relative to economists’ expectations as of late.