Some of the financial systems favorite one-stop measures of sentiment have returned to levels typically associated to conditions completely devoid of risk. That is a remarkable turn of events given the proliferation of systemic fundamental risks from trade wars to monetary policy normalization to warnings of economic plateaus. Nevertheless, the S&P 500, Dow and other benchmark US equity indices have returned to record highs. Their more recent performance has shifted to treading water, but they are holding close to record highs. In the same vein, the market’s favorite ‘fear index’, the VIX volatility index, has steadily steamrolled any uncertainty lingering in the system. While we are still holding a meaningful premium over the incredible sub-10 lows the index frequented back in the second half of 2017, there is little concern over that historically extreme low. Ultimately, the market is still positioning in an ‘all-in’ fashion with a sense that nothing bad can occur with little interest in hedging risks when there is arguably the most to lose. Beware sliding into the warm waters of complacency. 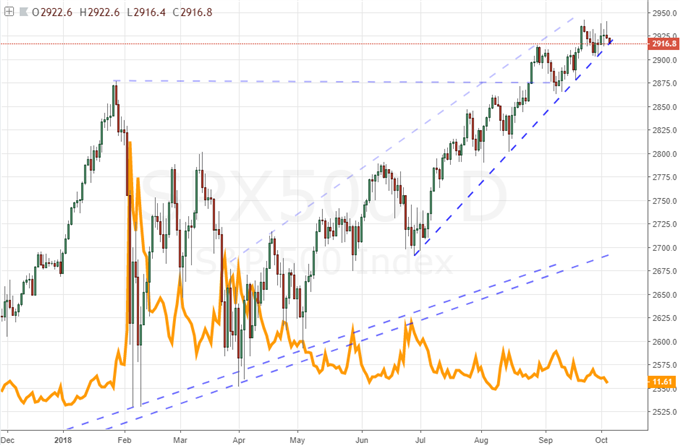 A Measure of the Extremes

There is often a fine line between a measure that is exceptional in its support for a singular view on a market – whether that be bullish or bearish, momentous or adrift – but the different is often determined in the context. The settings behind the aforementioned risk assets are nothing short of incredible, but not necessarily in an encouraging way. From the S&P 500, we have not seen a 1 percent or greater drop daily drop from the index in 70 trading days. That may not break any records as we had tallies surpassing 100 days through January 2018 and March 2017. However, it is nevertheless an extreme reading. Before those two remarkable tallies, we hadn’t see such a stretch since 2006. Furthermore, seeing this kind of stretch paired with record highs is the epitome of reckless momentum. 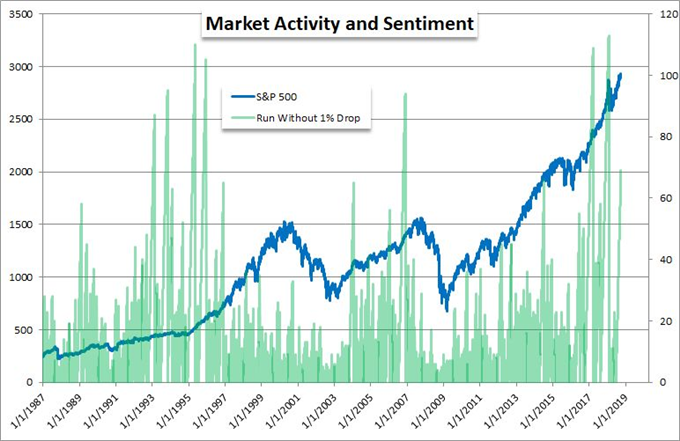 Another remarkable figure to consider for the S&P 500 is the stretch of time the index has spent since it last found itself in a bear market – technically determined as a 20 percent or greater correction from a cycle high. Through this past session’s close – short of the milestone – we haven’t experienced a bear market in 2,400 trading days. That is close to a decade of trading. Of course, the periods leading up to the crash and bear market of 1987 and 2000 respectively were longer periods of bullish control but that doesn’t mean the market’s complacency is any less overwrought. 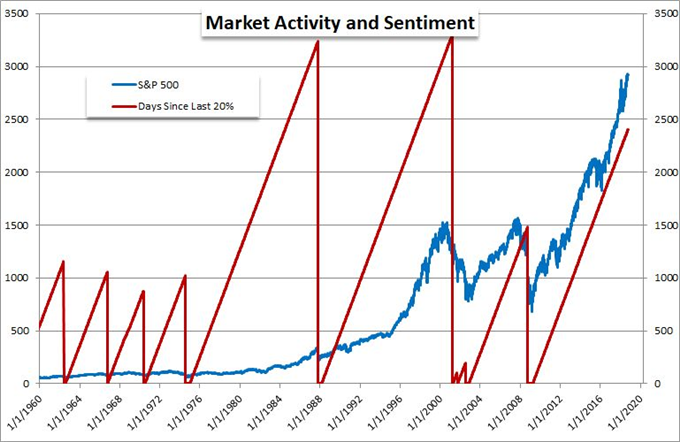 Through volatility, history has shown a tolerance for implausibly low readings of anticipated market activity for incredibly long periods. Yet, here too, the environment paints an unreasonable sense of confidence. Looking to the activity levels of volatility, we find that the frequency of activity charges continues to retreat. At present, the volatility of volatility measure (via VVIX below) is at its lowest level since August but marches steadily towards readings not registered since the summer months of 2017 – the absolute extreme for volatility. 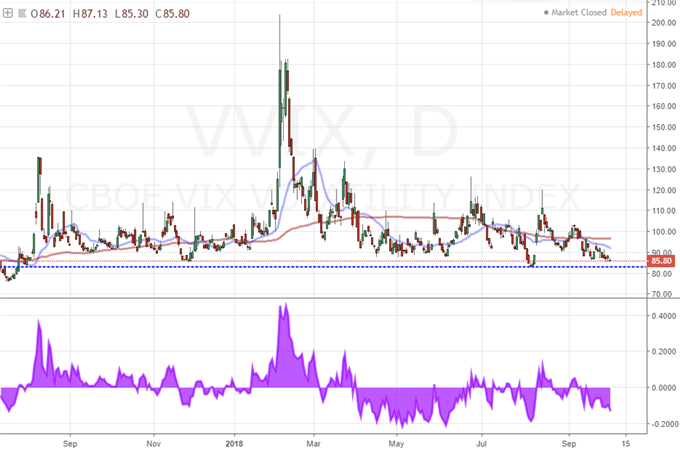 Perhaps a greater concern established in the state of volatility and the complacency of the speculative rank is found through speculative positioning behind volatility products. Speculative futures traders have increased their exposure exponentially in the VIX derivative contract with open interest readings steadily rising. And, where is all of this interest being directed? Behind a short trade. Net speculative futures positioning has continued its dive to surpass a net short holding of more than 130,000 contracts. That is still short of the record back in summer 2017, but it is nevertheless extreme. How much return are bears expecting from this index not far from its practical floor? Not much, but that isn’t what they are targeting. The interest in in holding the position only until the expiration so premium can be collected when no exceptional moves have developed in the interim. Clearly, such a trade is remarkably presumptuous and a horrible risk-reward balance. 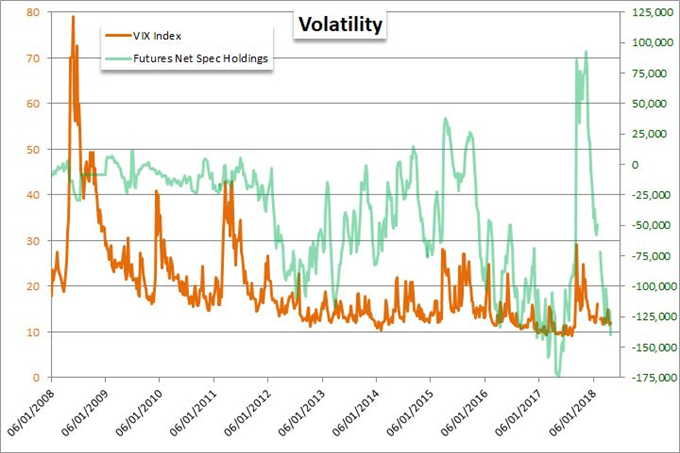 The Contrast in Signals

Where the S&P 500 (and other US indices) works well to confirm what the VIX registers for sentiment – and vice versa – it is important to register that such benchmarks are not the norm in speculative assets across the globe and risk spectrum. Comparing capital markets, we quickly find the disparity in a comparison between the S&P 500 and the Vanguard’s global measure that excludes specifically the United States (VEU). More speculative assets seem to be following the VEU in its moderation than the S&P 500 in its seemingly relentless climb. 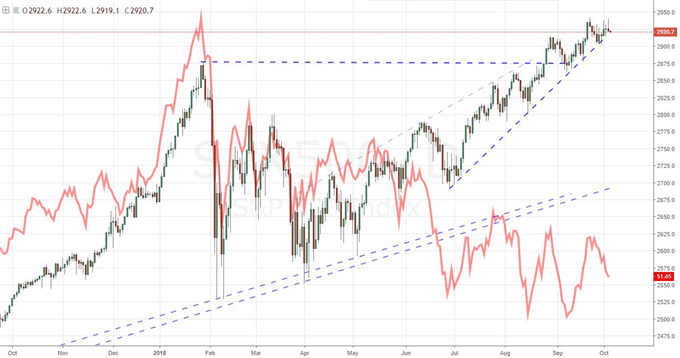 Further illustrating the discrepancy between the exceptional consistency and climb behind the US indexes and the ‘rest of the speculative world’, he have the rolling 12-month performance for a range of assets below. There are no other asset types that come close to the climb enjoyed by the US index over that period relative to the other measures in the spectrum - and that includes global equity markets. Which of these is more reliable a signal for the broader financial system: the collective struggle of these past months or the single outperformer that seems to defy the fundamental logic everywhere else? 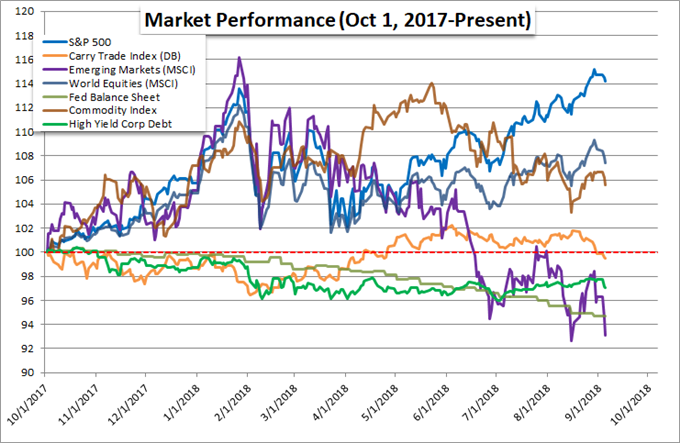 Breaking out global equity indices down for comparison via a rolling 12-month performance, we see a similar assessment of US equity ‘exceptionalism’. Recently, Japan’s Nikkei 225 has moved to the top of the performance chart, but most other indices are close to unchanged or underwater when benchmarking to October 2017. 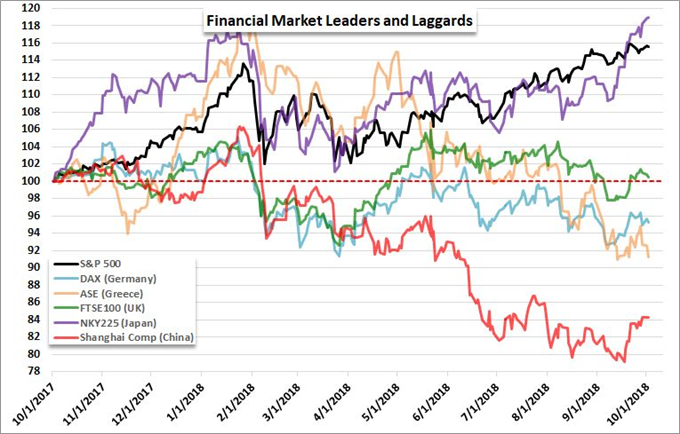 A World of More Uncertainties

Animal spirits can prove an exceptional motivator for speculative appetites. Momentum can be borne from pure appetite for return the expense of practical evaluations of risk readily. However, the wider the net for systemic concerns across the broader market, the greater the risk that an inadvertent headline or data release could trigger a systemic deleveraging. Just a few of deeply rooted risks the financial system and economy face moving forwards include trade wars, European stability, normalization of extreme monetary policy and so much more. Remember the axiom: ‘don’t pick up pennies in front of steamrollers’ as we consider the bearing on risk trends moving forward.