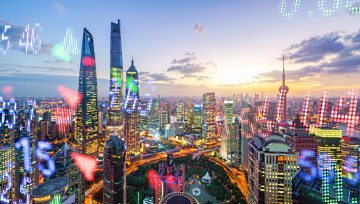 S&P 500, DAX & FTSE Outlook: FOMC in the Spotlight Next Week 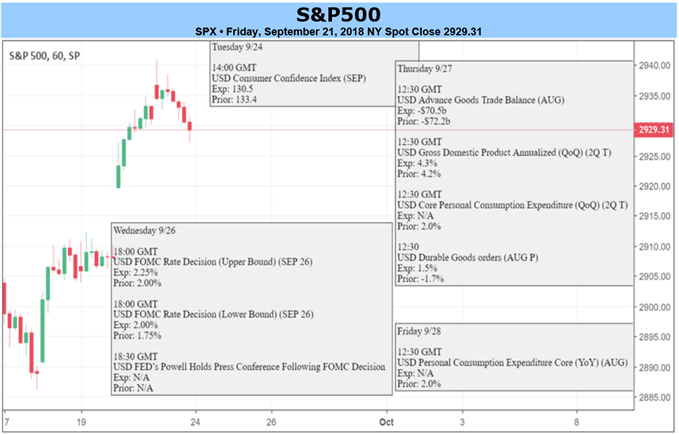 The coming week is highlighted by the FOMC rate decision on Wednesday, but with the market expecting rates to rise another 25 bps the market’s attention will be on Fed Chair Powell’s press conference. Volatility surrounding these meetings has been limited with little in the way of action or words to rock the boat. Look for more of the same, however, as per usual expect the unexpected. ‘High’ impact data events for the week include Consumer Confidence on Tuesday; Trade Balance, GDP, Core PCE (QoQ), and Durable goods on Thursday, and finally Core PCE (YoY) on Friday. See the economic calendar for further details.

The trend is pretty clearly up and with the market hanging out in record territory, regardless of one might think of the market fundamentally, none of that will matter until we see price roll over and start taking out support levels. As long as all stays intact, so does a bullish bias towards new highs.

Next week’s calendar is highlighted, in addition to the FOMC in the U.S., German CPI on Thursday along with German unemployment figures and Euro-zone CPI on Friday. For details, check out the economic calendar. Should we see a sizable move in U.S. markets on Wednesday’s Fed meeting look for a gap of some sort to possibly start Thursday’s trade.

The DAX has been recovering with the help of general risk appetite staying firm. Recapturing the 12104 level has gone a long way towards helping make a case for higher prices. However, now there is the bottom of the Feb 2016 trend-line and another running lower not far ahead to contend with. This is an important test as the trend still remains pointed lower.

Brexit headlines will remain a source of volatility for the foreseeable future, as we saw again to end the week when talks between the EU and UK went south. The FTSE was limping along until Friday when news drove the currency-sensitive index higher on severe British pound weakness. In terms of the calendar for next week, it is relatively light for the U.K., but just as the case is with the DAX keep an eye on how the U.S. plays out on Wednesday.

The market may continue to trade higher, but conviction on the top-side is still lacking as larger forces from a long-term topping pattern continue to remain a broader negative. To start next week, the FTSE will contend with the August 15 low and 200-day MA. Another round of selling may not come in initially as the market tries to build on Friday’s momentum first.