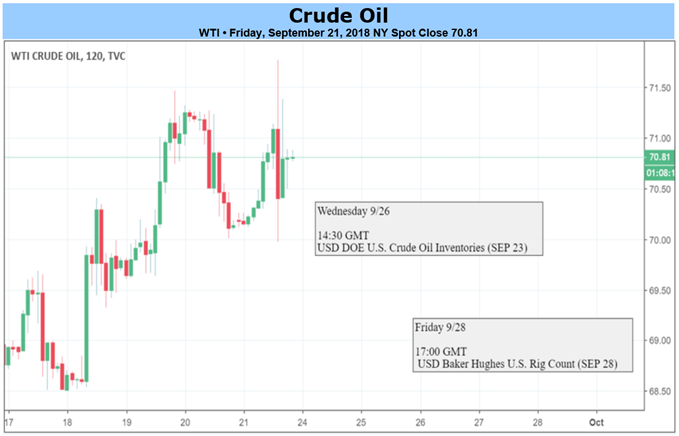 Crude has benefited mightily from a combination of fears surrounding supply shortages on OPEC-member depletion rates and sanctions as global economic growth continues to hum. Wednesday’s EIA Crude Oil Inventory Report was read as bullish as both gasoline and crude inventories saw a draw, which led to a sharp rise in the front-month crude oil contract.

Some traders are focusing on the divergence between WTI and Brent, which is beginning to smell like 2011 when the WTI-Brent spread blew out as the correlation between the two benchmarks fell to the lowest level since 2014 on a 120-day rolling scale. The breakdown in correlation is seen as the supply risks are tilted toward Brent whereas WTI is being by demand keeping up with shale production.

As OPEC is set to meet this weekend, traders are anticipating a likely boost in production with a possible 500k barrel per day increase per Reuters to counter the Iranian sanctions imposed by the US. The bullish outcome scenario that traders should watch for is whether OPEC and allies feel they cannot immediately cover the lost output from Iran as well as Venezuela’s depletion rates.

Leading up to the meeting, Iran has argued that an increase in production in response to their sanctions is a violation of the OPEC agreement. However, it appears the wind is blowing to favor a production increase as Russia and Saudi likely appease Trump’s request to “get prices down now!”

Ichimoku has been applied and complemented by the similar MACD indicator. Both show a bullish environment that favors further upside as opposed to a bearish downside reversal. Behind the uptrend has been a favorable fundamental backdrop explained above.

Additionally, a move above $80/bbl could take crude into a new higher range between $80 and $90/bbl. However, if a more substantial boost in production than anticipated from OPEC and allies keeps a lid on Oil at $80/bbl, traders could see a move toward the recent polarity point of the January high and August low $70/bbl.