Over the past few months, emerging markets (EMs) have been drowning in a tumultuous sea of uncertainty. The threat to global growth from on-going trade wars and rising US interest rates have stoked capital outflows, weighing on sector shares and currencies alike. The Turkish Lira plummeted more than 20 percent in August after the US hit its home country with sanctions. Cash-strapped Argentina requested early loan disbursements from the IMF, sinking the Peso. Meanwhile, South Africa entered recession and the economic outlook for the Philippines, Indonesia, and Mexico appears grim.

This has all been occurring against the backdrop of broader macroeconomic developments that have been steering markets toward risk aversion. President Trump’s economically nationalist policies has sparked trade wars with the EU and China, and threats are now being made against Japan. This comes on top of slow and inconclusive NAFTA negotiations.

At the same time, the Fed’s hawkish policy has been driving up global borrowing costs. That has encouraged capital to flee assets linked to heavily indebted EM economies in favor of alternatives with comparatively lower risk and an increasingly more competitive yield. Markets are now eyeing the upcoming Brazilian election as the next major inflection point in this drama.

Voters are due for the polls on October 7th in a political climate that is nothing short of turbulent. Since 2014, an on-going criminal investigation known as Operation Car Wash has sent shockwaves throughout the country. The investigation revealed a network of money laundering and corruption that has resulted in the indictment and imprisonment of several prominent businessmen and politicians.

The current President, Michel Temer, is facing a second round of corruption charges for obstruction of justice and involvement in a criminal organization. He was the vice president to Dilma Rousseff, who in 2015 was accused of corruption and was ultimately impeached in August 2016.

Until recently, the country’s most popular candidate was former President Luiz Inácio Lula da Silva of the Workers Party (PT). He too was under investigation for corruption and was ultimately prosecuted and sentenced to 12 years in prison. He was officially dropped from the race earlier this month and picked former Sao Palo Mayor Fernando Haddad as his replacement. Haddad’s running mate, Manuela d'Ávila, is a member of the lowly-represented Communist Party of Brazil (PCdoB).

Following the investigations and arrests, many Brazilians became disillusioned with the political system. Amid the disappointment, anti-establishment and right-wing Social Liberal Party leader Jair Bolsonaro rose in the polls. He is currently leading with 26%. His popularity also grew – albeit marginally – after a near-fatal stabbing that landed him in a hospital.

Despite his incendiary rhetoric, praise for the Pinochet dictatorship, and shameless admittance of being an economic novice, markets may – after initial volatility – make their peace with Mr. Bolsonaro. His top economic advisor is an advocate for privatization and for radically restructuring Brazil’s faltering social security system. Bolsonaro has also expressed an interest in selling state-controlled companies, primarily those that were created by left-wing governments.

Markets would much prefer Bolsonaro over Ciro Gomes of the Democratic Labor Party, and Marina Silva of the Sustainability Network. Their less than enthusiastic – and at times hesitant – view of privatization make them less of a magnet for investors.

However, the candidate that will likely help calm local and emerging market volatility would be Geraldo Alckmin. His conservative views of small government, tax reduction, and overhauling social security along with an unassuming demeanor make him a compelling candidate for investors. However, his lack of charisma in an environment that requires it likely explains his poor performance in the polls, where he currently stands at 10 percent.

The turn away from centrism is part of a broader global trend of growing popularity of anti-establishment parties and politicians. The election in Brazil, much like the US presidential election in 2016, is not about right versus left but rather a battle between conventional politics and a rejection of the status quo.

Markets rely on stability and relative predictability as the foundation for their function and tend to prosper when moderates are in power. Investors often become risk-averse when radical parties or politicians –who reject conventional systems of order – hold the reigns of the state.

The Brazilian Real and emerging markets have had a tumultuous tumble since the beginning of the year and both are likely to experience higher volatility as election day comes closer. On September 13th, the currency closed at its lowest point since 1994. Brazil isthe eighth largest economy in the world and a key driver of economic growth in Latin America, so investors will be watching closely and other emerging markets will await the results with baited breath. 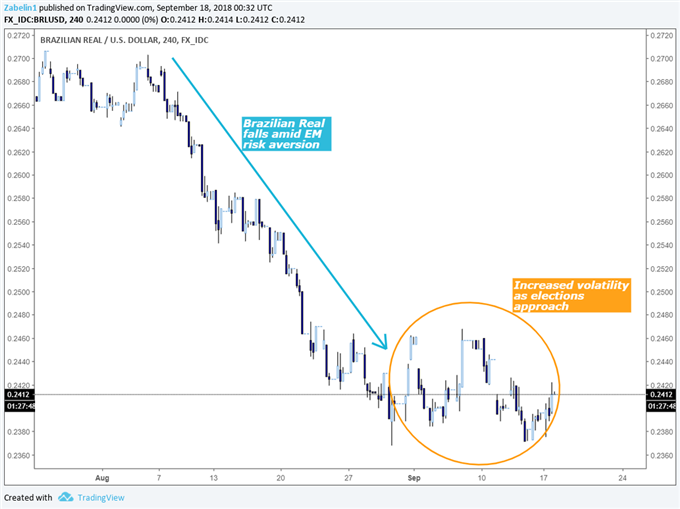 A report published by the World Bank Group found that political stability and security, along with a strongly enforced legal and regulatory environment, were essential for driving foreign direct investment (FDI). If these elements are lacking, investors may panic and pull out their assets amid uncertainty about a new government’s agenda. In the case of Brazil, the chaotic election creates the risk of capital flight and may potentially light the fuse for greater risk aversion. The strengthening US Dollar also puts a strain on emerging markets that have debt denominated in the benchmark currency. It raises the probability of default that may further push investors away.

Sentiment-linked assets such as the Australian and New Zealand Dollar may be vulnerable. EM currencies such as the Argentinian Peso and Turkish Lira may also see a shakeup.

On the opposite end of the spectrum, anti-risk alternatives like the Japanese Yen and the US Dollar may outperform.Bonds issued by low-risk lenders like the United States may also see a rise in price as investors turn toward capital preservation. 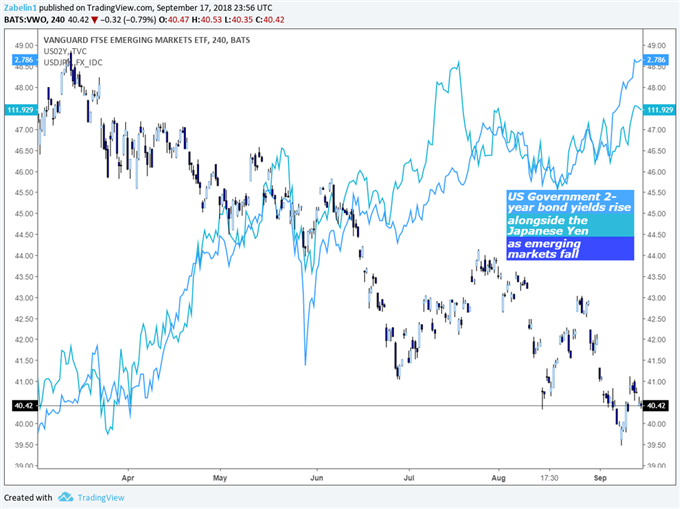