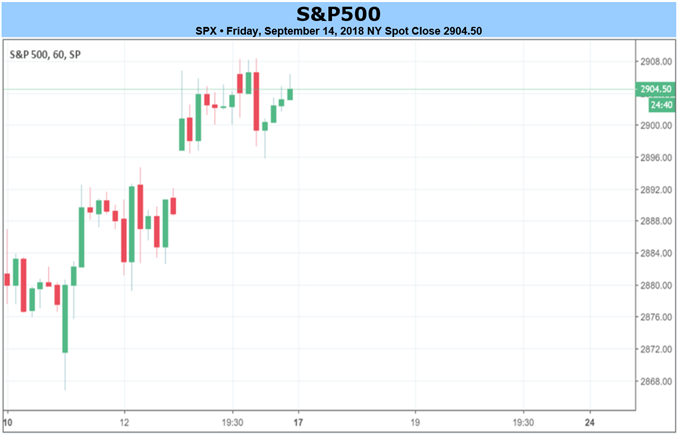 This coming week is a quiet one on the data front, with no ‘high’ impact releases on the schedule. Trade war headlines from time-to-time have looked to take stocks lower (as was the case on Friday when it was reported Trump gave the go-head on $200 bln tariffs on China), but at this time the market receives news with only limited concern. Look for this trend to continue. Seasonality is unfavorable for stocks right now, but has not mattered thus far.

Turning to the technical landscape, the uptrend remains well intact as the prior high and trend-line from June were met last week and price turned higher. Record highs are only a short distance away and as long as support holds a run on new levels looks likely. For more on U.S. indices, check out Friday’s S&P 500/Dow piece.

The ECB met on Thursday, taking no actions as expected and the market responded accordingly with very limited movement. On Wednesday, Draghi is set to speak in Berlin, but any volatility which may arise from his words could be mostly found in the euro. For a list of all scheduled events, check out the economic calendar.

The DAX finally found some bids last week, but faces resistance in the low 12100s, a recent breakdown point. The trend remains lower and resistance in place, the question is whether that will persist if U.S. markets keep on forging higher. Bottom line, stay below resistance and outlook remains neutral to bearish, get above and market will likely continue to rebound. 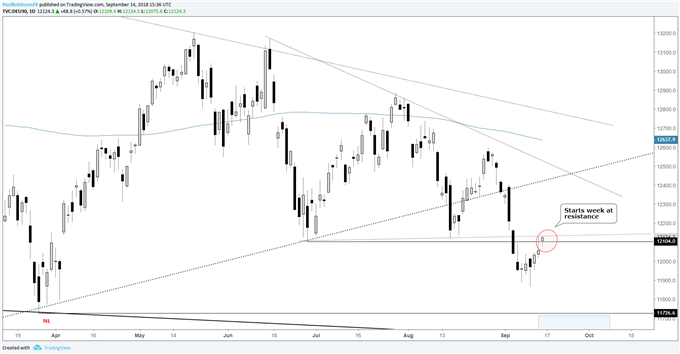 The BoE also met on Thursday, and just as was the case with ECB they held on making any changes as expected. This led to limited volatility in both the pound and FTSE. ‘Brexit’ headlines will continue to remain a focal point of risk.

The FTSE’s technical posturing remains quite weak, but the index appears likely to try and continue working off short-term oversold conditions. Looking higher, resistance may be found at a lower parallel in the mid-7300s, and on weakness the first level of support arrives at last week’s low of 7220, then the trend-line rising up from February 2016.