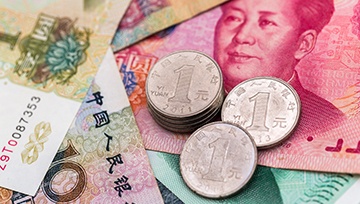 What is CNH and CNY and what are the main differences?

CNH refers to the Chinese Yuan in the offshore market, which is outside of Mainland China (the onshore market). China’s capital markets, including the FX market, are controlled and not fully opened yet. This leads to different features of the Chinese currency in the onshore and offshore markets, and thus two tickers are assigned to distinguish them.

In the onshore Mainland China market, the Chinese Yuan is called CNY. On the other hand, the offshore market includes traditional Yuan centers, such as Hong Kong (a special administrative region of China), Singapore, London and newly-developed centers such as Luxembourg. 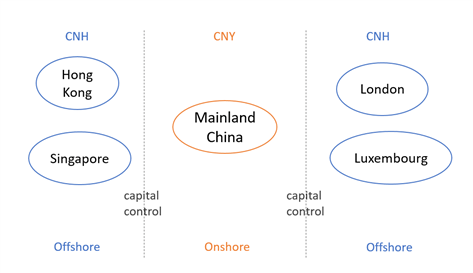 Find out more on the differences between RMB, Yuan, CNH and CNY

THE HISTORY OF CNY 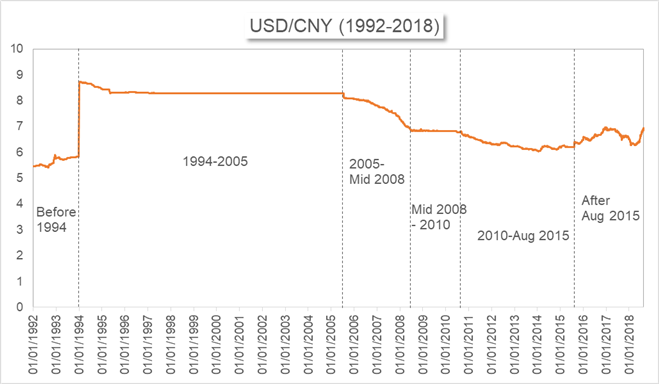 Mid 2008 - 2010: The CNY was re-pegged to the USD, following the eruption of the global financial crisis in the mid of 2008. This was used as a measure to protect China’s international trade during the crisis. The USD/CNY was restricted in a narrow range between 6.81 and 6.85.

Aug 2018 - Today: The CNY was de-pegged against the USD and referred to a basket of currencies again. On August 11, 2015, China’s Central Bank weakened the daily CNY fixing (Yuan’s reference rate) by -1.82% to 6.2298, starting a new round of reforms on the Chinese currency. On December 11, 2015, the PBOC introduced CFETS Yuan Index, a reference for the CNY price.

As of today, China has continued to adopt the managed-floating exchange rate regime in the onshore market. The USD/CNY remains to be the top pair among all Yuan pairs and has the highest trading volume; at the same time, China’s Central Bank also looks to other CNY pairs when guide the onshore Yuan rate.

THE HISTORY OF CNH 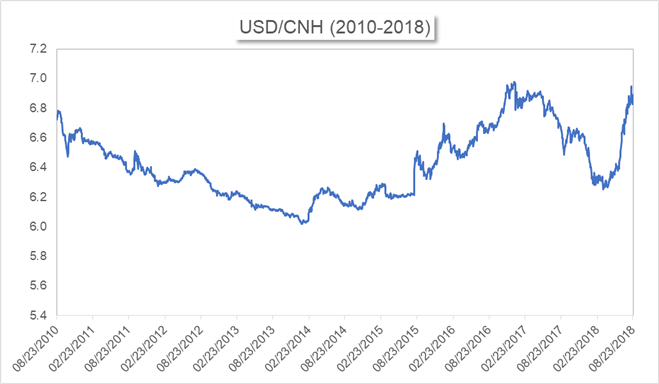 2004 - 2010: Preparation Phase for CNH. The CNH has a much shorter history than the CNY. The letter “H” in CNH was originally referred to Hong Kong, the first offshore market for the Yuan. From 2004, Hong Kong began to introduce Chinese Yuan business, such as trade settlements in the Yuan.

WHAT IS THE DIFFERENCE BETWEEN CNY AND CNH IN TRADING?

It is important for traders to understand the difference between CNY and CNH. Fundamentally, the CNH, traded in the offshore market, is considered to be less controlled and more market-driven than the CNY. This makes it more like a free-floating currency than the CNY, and a better choice for speculative trading. 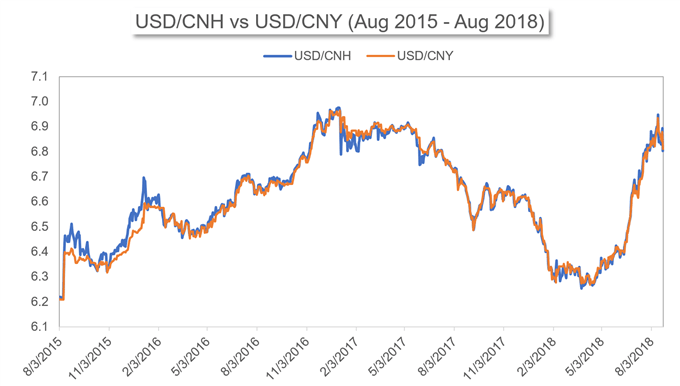 New to forex trading? Download the DailyFX Free Trading Guide to learn how to put ideas into action.

READ MORE ON CNY and CNH