US equities did not fare well in the shortened holiday week to open September with the NASDAQ posting its largest weekly loss in over 5-months. The tech-heavy index took a beating after trading resumed Tuesday, September 4th. The discourse between US Senators and officials of Twitter and Facebook generated some early losses for tech on Wednesday. Thursday saw a continuation with semi-conductors and chip-makers falling under threat. Friday piled on losses with trade war uncertainty controlling the headlines. Together, the initial losses in specific areas were enough to drag down the broader index with giants like Apple and Amazon following suit. The NASDAQ ended last week down -2.58%. 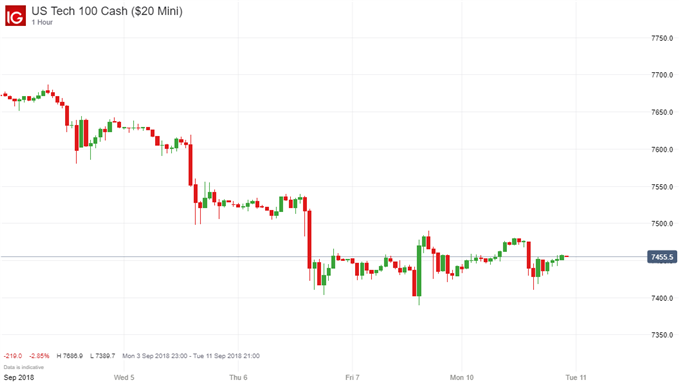 The S&P 500 and Dow also shared in the pain but to a lesser extent because of their lower exposure to tech. Still, the week saw the S&P 500 decline -1.04% while the Dow shed a modest -0.19%. Collectively, the poor performance of US equities is more likely attributable to trade war developments and uncertainty.

A Brief History of Trade Warsis a great resource to get up to speed on the ongoing economic conflicts.

With the public comment period over for the proposed $200 billion in tariffs on China, the US is likely set to announce its decision on their implementation in the near future. If they decide to move forward with the tariffs it would signal a steep escalation in the conflict with China and have serious ramifications on equities in the US and globally. Already we can see some rising demand in traditional safe havens like the Franc, a currency which enjoys dissociation from the trade war.

Friday saw the risk of trade wars grow as President Trump threatened to lobby an additional $267 billion of tariffs on China. The move rattled markets and sent equities off their Friday gains. Furthermore, President Trump warned Japan should look to make a trade deal with the United States in order to reduce the large trade surplus Japan has. 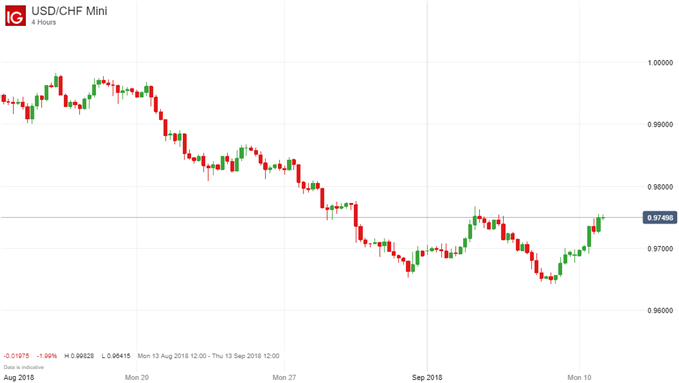 Safe haven appeal in the dollar may be reduced because of the United States’ involvement in the trade war as the dollar has fallen from recent highs in mid-August. Still, a rally was posted Thursday even as emerging market fears wane and the US’s tariff decision loomed. 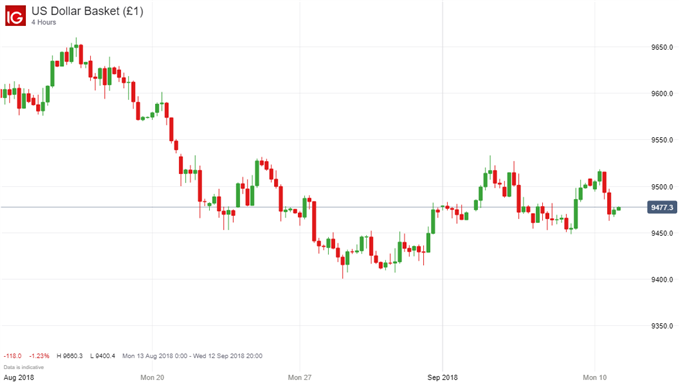 While flight to the dollar may be rather strange given its involvement in the trade war, the recent pressure on equities is less so. However, what is unexpected is the capital flows into US equities through this measured retracement in index levels. 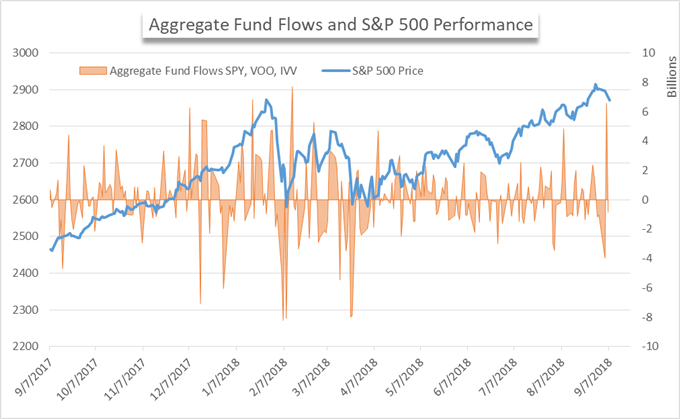 Even as equities face significant event risk, investors seem to be ‘buying the dip’ before a key piece of news that could create a leveraged recovery – or deeper retreat. This may leave some investors out to dry, as they catch a falling knife instead. With that in mind, the 3 largest ETFs tracking the S&P 500 saw $6.6 billion of inflows on Wednesday the 5th. According to Bloomberg, this marks the largest inflow since February 12th after US equities faced a quick and dramatic correction. Similarly, this week’s inflows into SPDR, VOO, and IVV are on track to total the most robust appetite since September 2015. VOO saw the single largest inflow to its holdings ever on September 5th, even as trade uncertainty gave bears the reins. 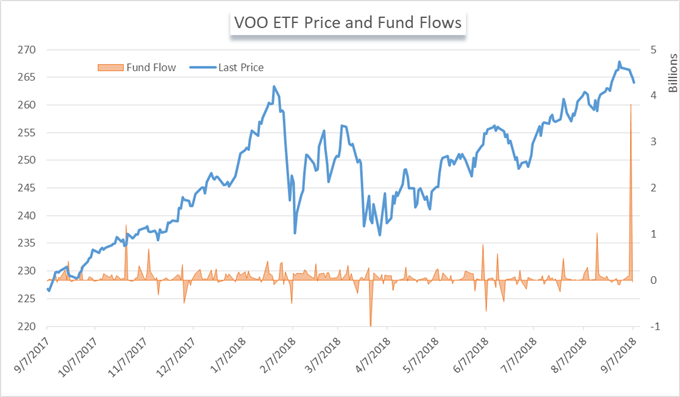 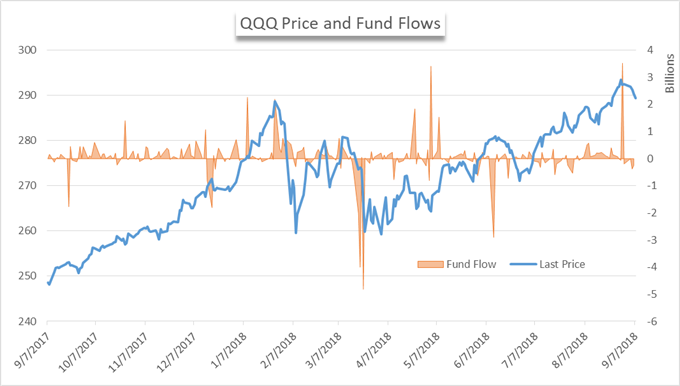 As the NASDAQ posted its worst week in months, the QQQ ETF which tracks the tech-heavy index saw net capital inflows. Across the board, demand for US exposure seems robust despite the strain equities faced the past week. It is conceivable that market participants didn’t expect a sustained downtrend given the recent stellar performance of US equities. Perhaps indicative of overarching bullish sentiment, a four-day decline constitutes a ‘sustained downtrend’ in today’s market. This week we could see the bullish sentiment appear again if more capital is poured into US ETFs.

If investors decide to double down, it would signal the fundamental foundation they see for US equites still stands and is therefore more attractive at a lower price. Conversely, if the tariffs are enacted and capital is moved out from the US, there may be a deeper market selloff as investors seek to reverse the current of their portfolio flows and reduce their risk profile. Such a shift would undoubtedly offer bearish sentiment for US equities which find themselves in a 10-year bull run.