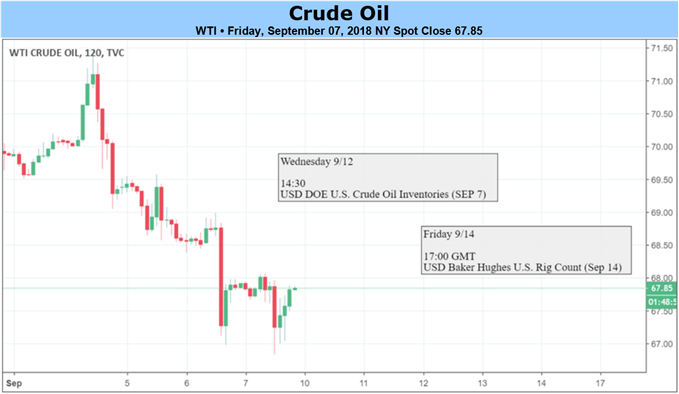 The drop in gasoline demand was the highlight of the delayed EIA Crude Oil Inventory Report on Thursday despite a bigger-than-expected in crude. Derivatives of energy like the S&P Oil and Gas E&P Index has moved lower this week while Crude, and other energy products all look susceptible to further losses.

On the positive side, China’s demand for crude doesn’t appear to be going away. While still considered an emerging market, China’s demand is often the final say for commodities though commodity bulls would be happier if Brazil, South Africa, Turkey, Argentina, Venezuela, Indonesia, and others were not in the midst of a crisis, at least China’s demand appears set to increase steadily.

China’s demand is seen through the lens of Rongsheng Petrochemical; a mega-refiner is set to buy crude from Iran after the sanctions are initiated from the US. China refiners have been a customer worth fighting for as Saudi has also been said to be courting petrochemical companies in China as a way to help solidify state revenues in the future.

Depletion rates make the mega refiners in China interested in a deal that satisfies both members as costs could rise significantly is supply risk was to turn from a threat into a present danger. On Friday, Platts said they see a steady decline in shale production as breakevens are starting to tick up, and IEA executive director, Fatih Birol said that a tighter oil market looks likely even with the current emerging market crisis.

It may not be a happy future, but you can see why crude bulls are likely more confident over the coming year than bears. Especially Brent bulls as the spread between WTI crude (that is shale extracted) and Brent remains wide in favor of Brent.

WTI Pulls Back From $71/bbl, Traders Watching For Higher Low Base

The shortened week started strong and then turned sour fast. The weekly range of 6.2% from Tuesday’s high to Friday’s low took the price of Crude to the 61.8% retracement of the August-September range.

Traders should anticipate further upside north of $63/bbl (spot WTI sits at $67.52.) A pullback of 61.8% is typically in the Elliott Wave framework in a developing impulsive move. Only a break below the base of the move near $64 would invalidate the current bullish framework whereas a break and close below $63 (yellow rectangle on the chart above) would favor the move since summer of 2017 is reversing.

Given the give and take between supply and demand pressures, some desks are looking at a rehash of the technical pattern that emerged from 2011-2014, which was a floor and ceiling that could lead to a range between $55 and $75/bbl in the coming years. $55/bbl would be a move to the bottom of the channel above.

I favor a more prolonged advance in crude as it remains strong despite a strong dollar, and should the US Dollar drop; we could see a boost as well as a pop in EM demand as their debt concerns lessen on a weaker US Dollar.