- The China-US trade war is set to escalate later this week when the US' public comment period ends.

- The new measures would impose tariffs on approximately half of all Chinese exports to the US.

The China-US trade war is set to deepen later this week when the public comment period for the US tariff proposal ends later today on Thursday, September 6. The US has already imposed tariffs on $52 billion worth of Chinese imports, and the new measures would place tariffs on essentially half of all Chinese imports into the US (over $505 billion imported in 2017).

While market participants have mostly brushed aside trade war escalations thus far, new tensions will come against a deteriorating risk appetite backdrop given concerns proliferating about emerging markets. The BRATS currencies - Brazil, Russia, Argentina, Turkey, and South Africa - have come under significant pressure in recent weeks, and the Chinese Yuan isn't far behind.

Even if there is a case to be made about domestic Chinese concerns that might give investors reason for pause (just as there are domestic Argentinian, Turkish, and South African reasons provoking the weakness in those respective currencies), the US-China trade war is clearly to most significant driver of USD/CNH in the short-term.

Moving forward, the tit-for-tat strategy of exchanging tariffs with the United States is going to continue for China, but not for long. After all, while the US imported $505.5 billion of goods from China in 2017, China only imported $129.9 billion from the United States. 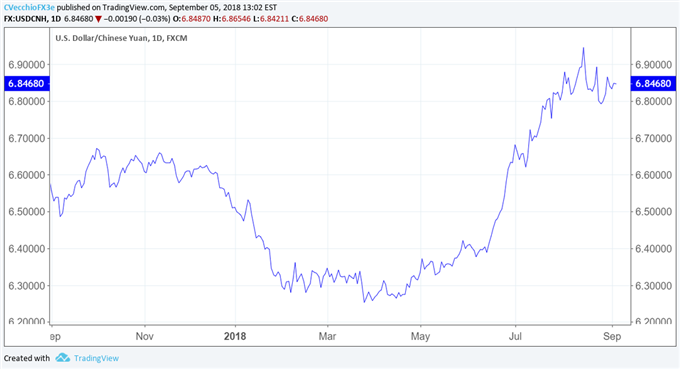 If China is running out of runway to implement tariffs back on US imports, it seems very likely that it will turn its attention to the Chinese Yuan. US President Trump has repeatedly criticized China (and the EU) for intentionally depreciating its currency, even if the evidence proves otherwise.

But as recent FX reserves figures show, the People's Bank of China has plenty of dry powder available if it wanted to neutralize the impact of the Trump tariffs. We've previously explained how a sustained depreciation by the Chinese Yuan could offset the economic consequences of the Trump tariffs, and the fact that USD/CNH has stayed elevated speaks to market participants' belief that the trade war has yet to crescendo.