US Dollar Will Retain Top Spot Despite Deficits, Trade Wars

Get live, interactive coverage of all major US economic data at the DailyFX Webinars, we’d love to have you along.

The US Dollar retains the global currency crown it has worn unchallenged since the end of World War 2. That crown has only been burnished this year by rising interest rates and an economy that seems to have ditched the financial-crisis blues more convincingly than any other.

However, there are reasons to be worried even about King Greenback. For one thing, the Presidency of Donald Trump polarizes the country as no administration has in the history of the Republic. America may be stronger economically, but it is hardly at ease with itself. That makes her politics volatile, her elections hard to predict. Then comes Trump’s zeal to “level” the US trade playing field, as he puts it. This has resulted in widespread spats, not just with arch-rival China but with supposed allies such as Japan and Western Europe. It may yet lead to a full-scale trade war.

At the very least, US reliability as an ally and partner is now questioned openly in places where, not so long ago, such questions would have been heresy.

The US Dollar Chafes Under an Increasing Domestic Debt Burden

Then there is all that debt. For an economy doing well the US sure likes to borrow. The Treasury itself predicts that IOUs in the second half of 2018 will be flying out to an extent not seen since those dark financial crisis days – a cool $769 billion. Some current projections have the deficit topping $1 trillion next year.

So far, we’ve looked at broad reasons why the Dollar might be more vulnerable that it looks at a cursory glance. There are individual countries which might want to try to get around its global pre-eminence, and who are certainly inclined to sell. Iran, Russia and China are all chafing under escalating US sanctions. By selling US Treasuries and ploughing the proceeds into things like gold – of which Russia has recently been a big buyer – they hope to head off some of the worst effects. It increased its holdings by a massive 29 tonnes in July, the largest rise since November 2016.

Why Not Gold Instead?

Look, it’s arguable that if Iran, Russia and Turkey possessed the fiscal discipline needed to establish such currency boards then they wouldn’t be in the trouble alleged to necessitate doing so in the first place. Moreover, the US is by a long way the world’s largest national holder of gold, which is also priced in dollars. Ten of the next eighteen largest holders are close US allies. Washington could exert far more control over gold prices than it does, and no doubt would if provoked.

So it’s likely that a gold currency board would free no one from Dollar hegemony, and here’s the thing. It’s hard to see anything which plausibly could, whether you’re just worried about those cracks in the US economic armor, as many investors are, or more openly hostile to Washington.

China may have global ambitions for its Yuan, but at present it accounts for less than 2% of all global transactions. The Yen, Sterling and Euro take much bigger shares, with the Dollar way out in front.

There have been various attempts by various nations ill-disposed to Washington to displace Dollar hegemony over the years. And they all come to nothing. Whatever your view of the US, the international financial system remains a product of that hegemony, rather than the other way around. You don’t get one without the other.

What this means in more practical, foreign exchange terms is that the Dollar will probably retain its haven currency status despite those rising deficits and despite attempts by some countries to circumvent it. Indeed, rising interest rates are likely to lend that haven status even more allure. 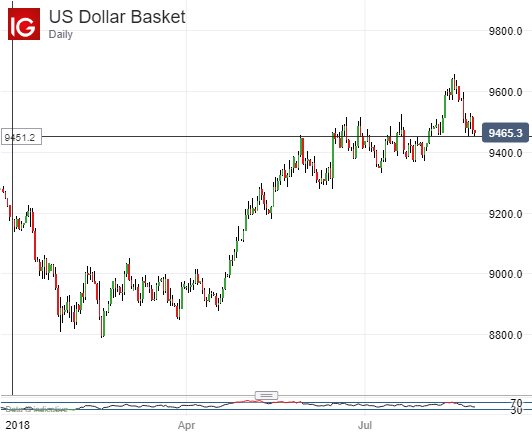 Resources for US DOLLAR Traders