Even a pullback in the US Dollar last week led to most ASEAN bloc currencies cautiously depreciating against the greenback. USD/MYR, USD/IDR and USD/PHP found themselves edging slightly higher. Last Friday offered some relief though as the markets interpreted commentary from Fed Chair Jerome Powell at Jackson Hole as relatively disappointing for bolstering additional hikes in the future.

One notable standout was the Singapore Dollar which was on pace to post its largest decline in a week against its US counterpart since February. SGD’s and MYR’s respective countries received inflation data that was mostly in-line with economists’ expectations. Weakness in emerging markets also weighed against ASEAN currencies last week as threats of US sanctions on South Africa weakened the ZAR.

A lack key domestic economic event risks for ASEAN currencies will have them eyeing external news next. This is where USD’s upside momentum could be reignited as the dominant uptrend since April remains intact. It will find itself facing the second estimate of Q2 GDP as well as the Fed’s preferred measure of inflation. Interestingly, Fed rate hike bets on the whole have been increasing despite data tending to disappoint relative to expectations.

Currencies such as the Indonesian Rupiah and Philippine Peso may also be left vulnerable to increased trade war threats between major nations. For one thing, last week the US and China failed to make meaningful progress on this front, opening the door to further tit-for-tat escalations. At this point, the former nation imposed the remaining $16b in import tariffs on the latter and China predictably retaliated with an equal amount.

Looking across the Atlantic Ocean, there may be scope for the EU to increase efforts to retaliate against Donald Trump’s sanctions on Iran. Next week, European officials will meet to discuss topics such as trans-Atlantic relations and the Iran Nuclear Deal. This may bode ill for the sentiment-linked MYR and emerging markets, but progress on NAFTA between the US and Mexico could offer a lift to market mood however.

USD/MYR’s dominant uptrend since April still remains intact and on a weekly basis, it has posted its longest consecutive winning streak since August 2015 which is three years ago. Now, the pair faces a critical barrier that could end it. This is the descending trend line dating back to November 2016. Simultaneously, negative RSI divergence warns that upside momentum is fading.

A turn lower would place the December 2017 horizontal line (former resistance) as near-term support at 4.0925. On the other hand, getting above the trend line exposes the 61.8% Fibonacci extension at 4.1293. 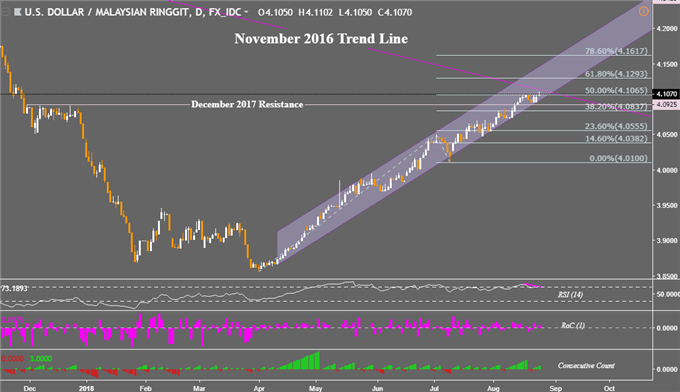 Euro May Be About to Drop Below Parity Against the US Dollar: Top Trading Opportunities
Advertisement