The Case for the US Dollar Topping Out

- The DXY Index’s fourth straight day of losses through yesterday has opened up the possibility of a false breakout scenario playing out.

- Per the CFTC’s most recent COT report, futures traders are holding DXY longs are at their highest level since May 2017.

- Meanwhile, the net-short position in US Treasuries has reached their highest level ever, suggesting that a further gain in yields will be difficult to achieve.

The US Dollar (via the DXY Index) is pacing for its fifth consecutive day of losses today, the first time such a streak has transpired since the end of March. While the DXY Index was able to attempt a breakout of its two-month long ascending triangle last week, it now appears that a false breakout scenario is on the table given a close below 95.53, the June 21 bearish daily key reversal and June 27 to 29 evening doji star candle cluster highs. 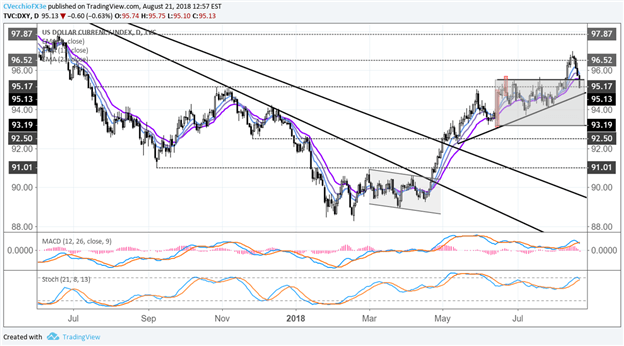 The doubt we cast last Thursday on the greenback’s ability to sustain a move higher, given how the drivers for the move were based in crisis events and not positive developments about the US economy (and thus, Fed policy), seems more appropriate just four days later. Out of necessity, the question has arisen, “is the US Dollar topping out?” There is some evidence to suggest that the bull case isn’t strong at the moment.

How Much More Can Markets Price in a September Fed Rate Hike?

There is a strong case to be made that the US Dollar’s gains earlier this year, notably between March and June, were largely driven by the market’s changing perception of the Federal Reserve’s rate hike cycle. Even though the Fed, via its Summary of Economic Projections, had been outlining the path for three to four rate hikes in 2018, rates markets were only pricing in two hikes total this year back in March.

It doesn’t seem like Fed pricing could be any more optimistic for the US Dollar at present time. In effect, the rate path is set through the end of 2018; the only direction it can move is for one less hike, which would be a negative development for the greenback.

Futures Positioning May be Problematic Again

Unsurprisingly, the US Dollar rally since the end of March has been accompanied by a large increase in net-long positioning in the futures market. In fact, according to the CFTC’s most recent COT report, US Dollar net-longs have risen back to their highest level since May 2017. 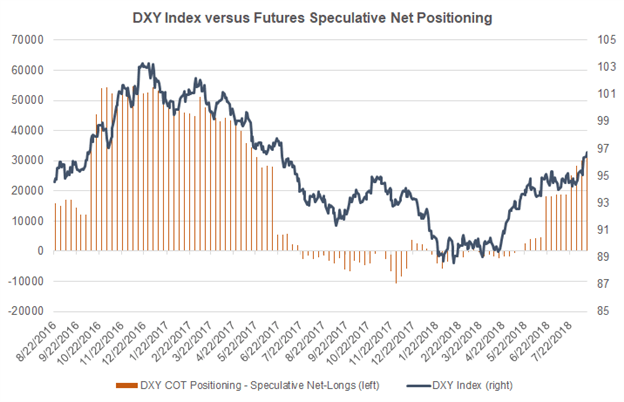 With the calendar shifting into the second half of August, typically a period of thinner liquidity as market participants take vacation for the last two weeks of summer, it would seem appropriate that a simple round of position squaring will work against the greenback. After all, coming into this week, the US Dollar was in the black for the month (for the fifth month in a row).

While there is definitely more room for longs to build – there were 56,712 net-longs held by speculators during December 2016, while there are 32,033 net-longs currently held –given the near-term backdrop, positioning is a negative for the greenback.

Rising yields have been one of the most significant drivers of US Dollar strength in recent months – particularly as other central banks refrain from tightening monetary policy in lockstep with the Fed, causing interest rate differentials to move out in the greenback’s favor. But as was the case with futures positioning for the US Dollar, positioning in US Treasuries does not provide useful evidence for the bull case. 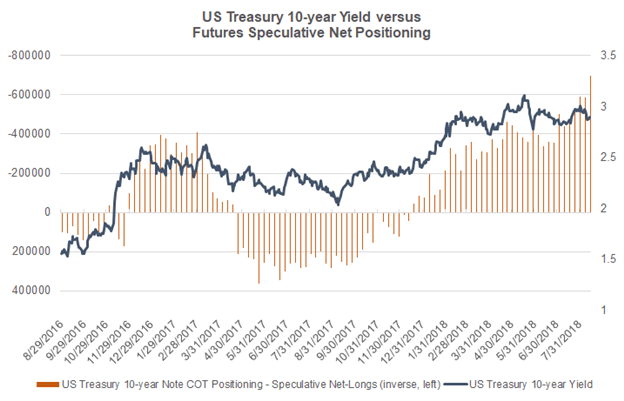 Even though the US Treasury 10-year yield has failed to crack the 3% threshold in a meaningful way this year, market participants have been eager to crowd into short positions. In fact, according to the CFTC’s most recent COT report, speculative net-short positions reached their largest level ever. Even a simple unwind of net-shorts could push US Treasury yields lower, which would undercut the US Dollar’s relative interest rate appeal – perhaps its most appealing quality among a sea of still low yielding currencies.