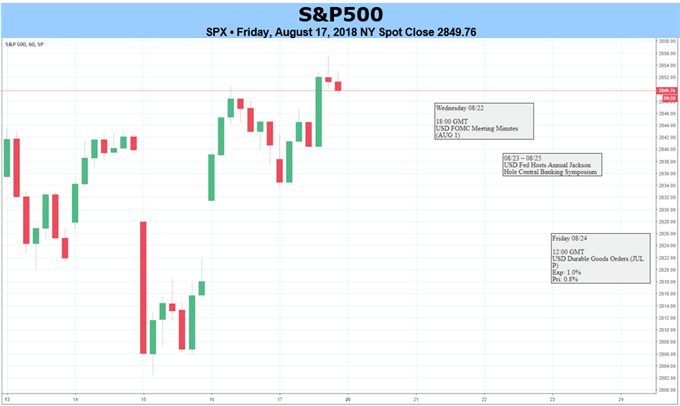 Next week brings the FOMC minutes and Jackson Hole CB Symposium on Wednesday and Friday respectfully, but it is unclear that these will have any real market-moving effects. It may be worth noting that this is Powell’s first time in Jackson Hole as Chairman of the Fed. Continued threats will come from Trade War headlines along with the Turkey situation.

Recent trade has brought with it some indecision as the market tries to figure out whether it can break out to news highs or roll over. If headlines are relatively quiet then look for summer trading conditions to keep the pace somewhat slow. Obvious resistance clocks in at recent highs up to the record peak at 2872, while support lies down around the 2800-line. If we see a breakdown from around current levels through 2800 a head-and-shoulders pattern will come into play, but not until then as it isn’t a developed formation.

Next week doesn’t hold any big data releases. Risk trends could be a factor here, but not sure how much upside we’ll see even if risk shows strength given how weak the DAX has been as of late. The euro has lost its impact as either helping or hurting the index as the two are now correlated, so looking to that has lost its edge.

The big development for the DAX these days is the break this past week below the February 2016 trend-line. A drop below 12104 will have the index making a lower low from June and towards the neckline of the year+ long head-and-shoulders. The DAX is a go-to right now for those looking to short a major global index. 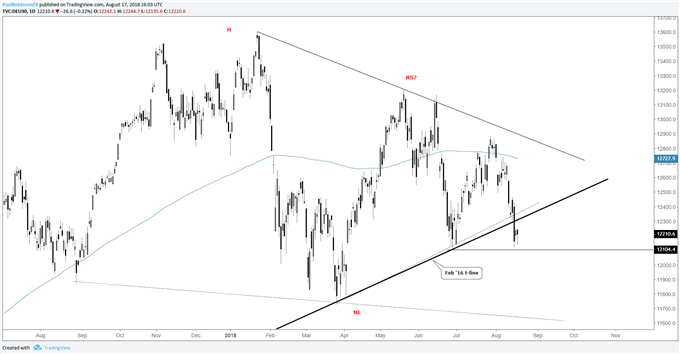 No big data on the docket for next week. As per usual ongoing ‘Brexit’ headline risk will remain a theme along with perhaps risk trends if they become a dominant factor.

The technical posturing of the FTSE is growing increasingly precarious, with the possibility of not only furthering a lower low from June but also kicking into high gear the macro-topping pattern discussed the other day. As is the case with the DAX, the FTSE is another index which traders may want to keep an eye on from the short-side.

What is a Short Squeeze and How to Trade It?
Advertisement