The advance in the US Dollar last Friday, which behaved as a safe haven amidst concerns on European bank exposure on Turkey, weighed on ASEAN bloc currencies such as the Philippine Peso and Indonesian Rupiah. This was amplified after US President Donald Trump authorized the doubling of tariffs on Turkish steel and aluminum exports.

The US Dollar’s potential role as the world’s reserve currency amidst trade war tensions and geopolitical risk can be a preview of what we can expect for other currencies like the Malaysian Ringgit and Singapore Dollar ahead.

One of the top-tier event risks next week will be a monetary policy announcement from the Bank of Indonesia. The central bank is expected to leave its seven-day repo rate unchanged at 5.25%, but it could stoke speculation of another rate hike down the road to help stabilize its currency. As mentioned earlier, IDR gains against USD could still be limited if the latter acts a as a haven as we saw last week. Not even a boldly hawkish outlook from the BSP was able to curb PHP weakness.

As such, key local economic event risk such as Singapore and Malaysian GDP, or Indonesian trade balance (which is due just before the Bank of Indonesia rate announcement) may not offer much for their respective currencies. The focus could turn to broad market mood which if sours, could strengthen the greenback further amidst global stock declines.

This could happen if Turkish financial exposure concerns linger and the US President advances his tough trade stance on the country. Meanwhile, the UK could be at risk of inching closer to a “no deal” Brexit outcome as Prime Minister Theresa May prepares for a sudden break off with the EU. US tariffs on the world’s second largest economy could also translate into perhaps weaker Chinese industrial production. Although that is expected to rise 6.3% y/y in July which is up from 6% in June.

USD/SGD managed to achieve its highest daily close this week since July 2017, just a little over a year ago. However, it has not quite managed to push above near-term resistance which is 1.3745 (the highs achieved in July). In its climb, the pair appears to have formed an ascending triangle bullish continuation pattern.

For the pattern to be confirmed, we would need a daily close above the formation with confirmation. In the event that the US Dollar gains, we may see this occur. The next resistance target could be 1.3789 followed by the 123.6% Fibonacci extension at 1.3902. Meanwhile, support appears to be the ascending line of the triangle. 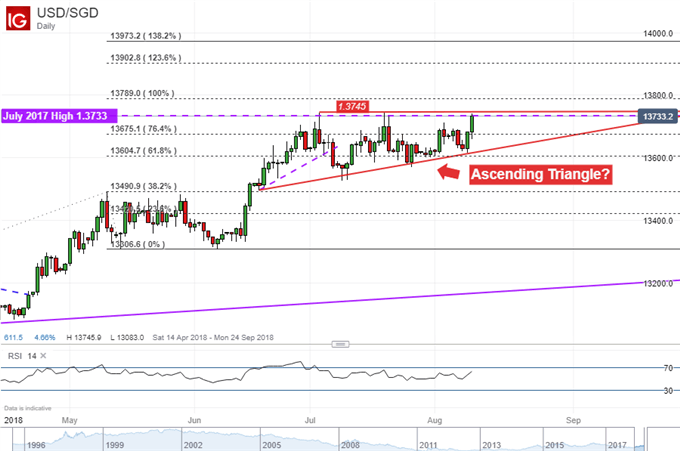