Most ASEAN bloc currencies came under pressure to a rising US Dollar this past week as expected. Indonesian CPI and Malaysian trade balance data failed to offer a meaningful reaction for the Indonesian Rupiah and Malaysian Ringgit respectively. Rather, the focus was on external factors where the greenback appreciated across the board thanks to a relatively less hawkish Bank of England interest rate announcement.

One regional currency that outperformed was the Philippine Peso which may have been as a result of hawkish bets ahead of this week’s central bank interest rate announcement. Indeed, the Philippine 3-year government bond yield rose throughout the latter half of last week. To help combat higher inflation, the Philippine central bank is expected to raise the overnight borrowing rate by 50 basis points to 4.0%.

However, some expectations are calling for a 25 basis point increase on Thursday. Whether it could be 25 or 50 may be influenced by a local inflation report on Tuesday. Philippine CPI is expected to rise from 5.2% to 5.5% in July which is further and further away from the central bank’s 2-4% target range. An upside surprise may bolster the case for a 50bps hike, boosting the Philippine Peso and vice versa.

Do keep in mind though that the Philippine central bank has also been aggressively upholding its currency by spending foreign exchange reserves. Looking at the chart below, most recent data showed them declining to their lowest amount since June 2012 which was over six years ago. Keep an eye out for fresh updates on foreign reserves out of Malaysia, Singapore, Indonesia and the Philippines which will all be released next week as well. 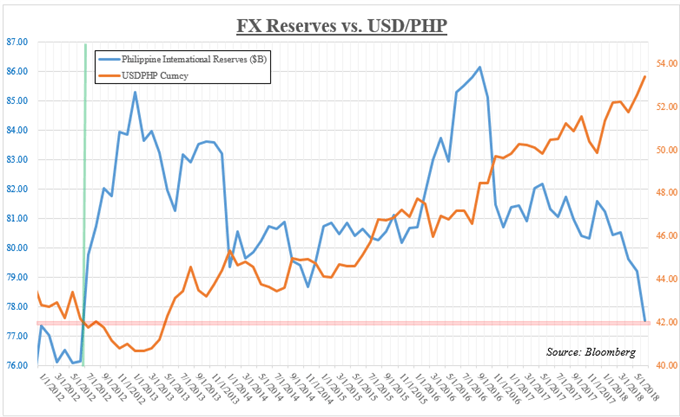 The Indonesian Rupiah awaits a local GDP report which is expected to release at an unspecified time on Monday. Economists are anticipating 5.12% growth y/y in the second quarter. However, even a miss in the outcome may not necessarily offer significant Rupiah weakness. The central bank highlighted and reiterated last week that it seeks to stabilize the currency in line with fundamentals as it intervenes in the market.

Outside of the region, keep an eye out for how the US Dollar responds to next week’s inflation report. US headline CPI is expected to rise 2.9% y/y in July again. However, real average hourly earnings may turn negative, bolstering the case for a Fed rate hike. On the other hand, US economic news flow has been underperforming lately. This opens the door for a downside surprise in inflation and perhaps lead to USD weakness.

Lastly, keep an eye out for trade war developments. Towards the end of last week, China announced it was ready to levy differentiated tariffs on roughly $60b US goods. Meanwhile, the world’s largest economy looks like it won’t be holding off on imposing higher levies on China. Trump’s top economic adviser Larry Kudlow said that the US has ‘more ammunition’ than China in a trade fight. Sentiment-linked currencies, such as the Singapore Dollar or Malaysian Ringgit could be left vulnerable if they indeed escalate and equities such as the S&P 500 tumble.

USD/PHP turned lower as expected after negative RSI divergence warned that upside momentum was ebbing. The pair halted its descent conveniently around 52.93 which is the series of highs achieved in May. It looks like this area has reestablished itself as support.

From here, near-term resistance appears to be 53.30 which is the lower area of USD/PHP’s consolidation since mid-June. A push above it will eventually expose the 76.4% Fibonacci extension at 53.90. On the other hand, a push below immediate support opens the door to test the 23.6% level at 52.32. 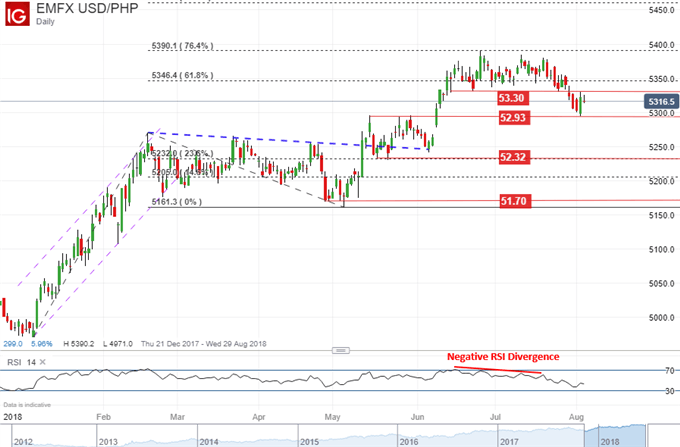