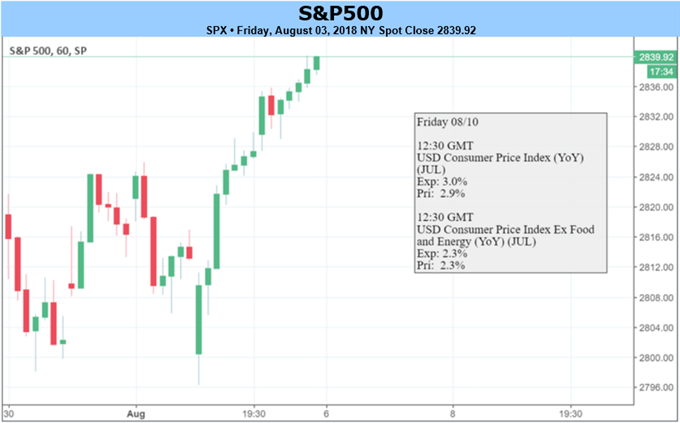 The FOMC meeting came and went with little fireworks as the Fed held as expected and no trend-altering words were said by Powell. Friday’s jobs report was relatively flat with NFPs clocking in at 157k vs. 193k expected, unemployment in line at 3.9%, down from 4% last month, while average hourly earnings remained 2.7% YoY. Looking ahead to next week, the calendar is light with the only high impact data coming on Friday via July CPI at 12: 30 GMT time. For details on all other key data releases, check out the economic calendar. Trade war headlines will remain a threat for the foreseeable future.

The S&P 500 sparked buying interest right at support on the Thursday gap-down into ~2800. We noted the possibility of a bearish short-term pattern leading to lower prices, but neckline support held. The rally out of support keeps the trend firmly pointed higher, but with us now in August (an often-slow time of the year), the market may go into a choppy phase in the absence of a reason for risk off.

As is the case everywhere else for the most part, the calendar is light next week. The euro continues to weaken, but hasn’t been the boon for the DAX it once was. Keep an eye on this relationship should the euro sink below 11500.

On Thursday, the DAX broke the upward channel it had been trading in since late June, putting the index in a precarious position. If it can’t soon get into gear, a break below 12493 could usher in more selling towards the February 2016 trend-line. However, if it can maintain a bid, the gap up to 12805 from Thursday could soon get filled. On Thursday, the BoE raised rates by 25 bps to 0.75% as expected, with the central bank, according to market pricing, not anticipated to raise rates again until September 2019. Both sterling and the footsie sold off following the meeting. Next week holds no ‘high’ impact data releases.

The FTSE broke higher out of an ascending wedge on Tuesday, only to reverse back inside on Wednesday. This primed if for more selling following the BoE. The fake-out breakout and downside resolution suggests more weakness is likely ahead, but overall price action is choppy and lacking strong conviction.