A US Dollar that finished cautiously higher last week combined with a lack of key ASEAN economic data allowed currencies like the Singapore Dollar and Malaysian Ringgit to trade little changed. Meanwhile, the Philippine Peso edged slightly higher against its US counterpart. It was boosted by intervention from the Philippine central bank. In fact, looking at the chart below, you can see the BSP spending foreign exchange reserves to help prevent aggressive depreciation of its currency. 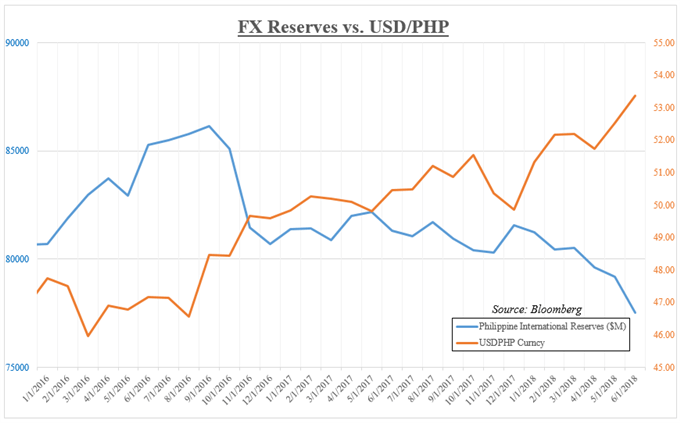 Another strong performer was the Indonesian Rupiah which got a boost from weaker US GDP data and updates from the Bank of Indonesia (BI). Going forward, the BI is introducing new measures aimed at attracting foreign investors according to Governor Perry Warjiyo. This includes a new overnight rate that will be transaction-based and making swap pricing “more attractive”.

While on the topic of the Rupiah, next week we will get Indonesia’s July CPI report. Last week, the Bank of Indonesia forecasted inflation at 3.16% y/y which would be an uptick from 3.12% in June. The country has been experiencing disinflation since mid-2017. The recent rise in overnight lending rates, aimed at guarding the Rupiah, add downward pressure to prices though. With the BI aiming for inflation between 3.5% +- 1% this year, CPI coming within parameters may allow the central bank to focus on defending their currency.

Similar to the Philippine central bank, the Bank of Indonesia has also lately been spending foreign exchange reserves to alleviate a runoff in their currency: 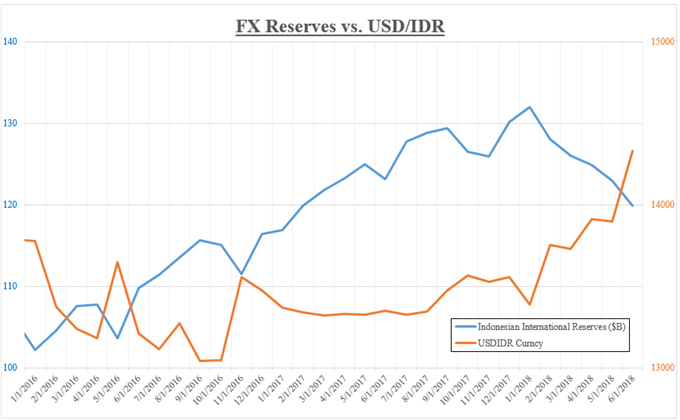 Ahead, we will also get Malaysian trade balance data. Keep in mind that for this country, exports represent a significant portion of growth. For the Malaysian Ringgit, this data may pass without much fireworks as the Bank of Malaysia is focused on inflation. It expects weaker price growth ahead making a soft outcome in the trade data potentially not too hurtful for monetary policy expectations.

With that in mind, these currencies may fall under the mercy of US Dollar appreciation in the week ahead. There, we will get a Fed rate decision, their preferred measure of inflation and GDP data. At the moment, the markets are not fully pricing in two rates hikes by the end of this year. This could allow the greenback to appreciate as the central bank firms those hawkish bets.

In addition, the US Dollar could also find itself appreciating at the expense of its British and European counterparts. For the former, weak UK CPI readings may undermine additional rate increases after next week’s BoE rate decision (the markets are anticipating a hike there). Meanwhile, softer Eurozone CPI data may dent the Euro, pushing USD higher against some of its ASEAN cousins.

Finally, the sentiment-linked SGD, PHP, IDR and MYR could come under pressure if earnings from automakers next week point to an uncertain outlook. This is because US Commerce Secretary Wilbur Ross noted that the conclusion on auto tariffs will come “in another month or so”. With that potentially clouding forecasts from automakers like Toyota or BMW, the S&P 500 could head lower amidst trade war conerns.

After negative RSI divergence warned that upside momentum was ebbing, USD/IDR has turned lower on the daily chart after breaking below near-term rising support from June. However, it faces 14,351 next and a break below it could signal a lasting reversal of its dominant uptrend since the beginning of this year. That places 14,137 as the next target. Meanwhile, immediate resistance is the July 19th high at 14,688. 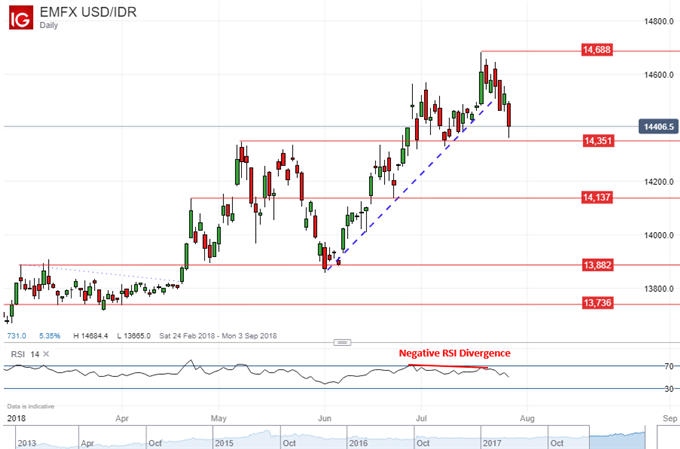