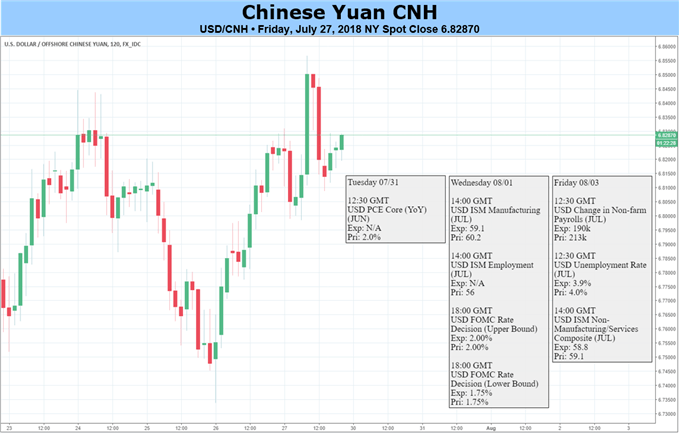 The Chinese Yuan dropped for the seventh consecutive week against the U.S. Dollar on both onshore and offshore markets; it also lost against all other G10 currencies over the same time. The spread between the offshore Yuan rate and Yuan’s reference rate widened as well, to nearly 300 pips on Friday. Looking forward, PBOC’s guidance, Chinese event risks, the country’s macro-economic policies, as well as the US-China trade war will be top drivers to the Yuan.

There have been increasing market speculation that China’s Central Bank is trying to weaken the Yuan amid the US-China trade war. In the past week, excessive weakness in the reference rate was not seen; the so-called Yuan fix moved in both directions over the days. However, it is still worth to continue to keep a close eye on the guidance rate, for clues of further Yuan weakness. This may help to predict whether the bottom of the Yuan is likely to see in the near future.

Also, Chinese regulators have shown diverged opinions over the macro-economic policies. While the PBOC, banking and securities regulators primarily targeted at curbing financial risks, the task of dealing with economic slowdown seems to have fallen onto Finance Ministry’s shoulder; an argument on how China should better implement the proactive fiscal policy emerged. Such discussions among regulators reflect China is facing multiple internal issues right now, which may not be solved easily and fast.

China’s official and Caixin manufacturing PMI gauges, to be released next week, could help to reveal the economic conditions. Both figures for July are expected to expand at a slower pace than in the last month, according to Bloomberg. A low ratio could be resulted from both internal and external challenges, from a lack of growth momentum to the on-going trade conflicts. Within such content, Chinese fundamentals are less likely to provide much support to the Yuan.

Looking more into the trade disputes, the US-China-EU trilateral relationship has become a key factor. This Wednesday, the US and Europe Union reached a deal, including to hold off on further tariffs and EU to import more US soybeans (a major target by Chinese tariffs). Two weeks ago, China and Germany signed deals worth nearly $30 billion. Many products covered are also major victims in the US-China tariff battles. It seems that both China and the US are seeking to win a powerful partner, in the effort to increase its own leverage in the trade war.

How to Research Stocks: A Step by Step Guide
Advertisement