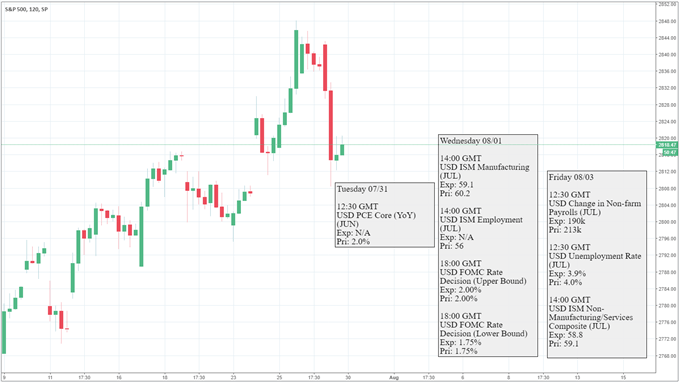 Next week the market’s attention will be on Wednesday’s FOMC meeting, but with expectations for the Fed to remain on hold with rates it will be about the language in the statement. The market is effectively pricing in two more hikes by year-end. On Friday, we have NFPs, with the U.S. economy expected to have added 190k jobs during July, down from the 213k print the month prior. For details on all data releases, check out the economic calendar. Trade war headlines will continue to be a threat along with focus on corporate earnings in the week ahead.

The S&P 500 continues to find buyers, but that could soon change as the calendar flips to August. Historically, August and September have not been kind to stocks, and with record highs just around the bend we could see either a double-top or fake-out breakout. We will be watching for an uptick in volatility for signs of growing instability and the possibility of a setback to begin.

Last week’s ECB meeting was rather uneventful as many expected, resulting in limited movement on thein the euro and DAX. Next week we have a good amount of ‘high’ impact data on the docket; highlighted by German Unemployment and Euro-zone CPI and GDP on Tuesday. Keep an eye on U.S. markets and how they respond to Wednesday’s FOMC meeting and Friday’s U.S. jobs report, as large swings there are likely to have at least marginal impact on global markets still open for business.

The DAX is continuing its upward trek within the confines of the channel off the late June low. The market could run into some problems soon, as the trend-line off record levels lies just ahead. If we see a swift turnaround at resistance, shorts may be warranted for a dip. On a move lower, the 200-day and lower parallel will be key support thresholds to watch. 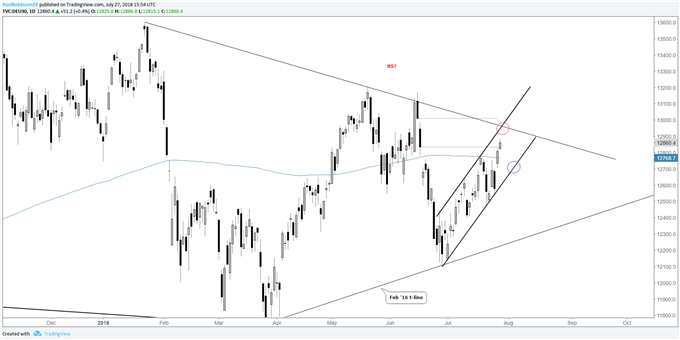 This coming week we have ‘Super Thursday’ with the BoE rate announcement in conjunction with the release of its quarterly inflation report. An outsized reaction in sterling could lead to an opposite effect on the price of the FTSE. No moves are expected by the central bank, but rate guidance could sway markets. As is the case with the DAX, watch key U.S. economic events and reactions.

On Tuesday, the FTSE attempted to break free from the ascending wedge it’s been stuck in the past few weeks. A decisive breakout looks to be just ahead with price quickly closing in on the apex. A sustained topside breakout will bring to light the possibility of challenging record highs, while a breakdown will have 7500 and the 200-day in focus.