- The China-US trade war is cresting and new concerns are rising elsewhere – mainly in FX markets.

- USD/CNH has gained over +9% since its yearly low, effectively neutralizing any impact from the Trump tariffs.

- The agreement with the EU means that the Chinese front of the US trade war is likely to intensify over the coming weeks.

What Led to This Stage of the US-China Trade War?

The global trade war pursued by the United States under President Donald Trump is shifting into a new phase. It’s become evident that US Treasury Secretary Steve Mnuchin’s comments back in May that a trade war was “on hold” were nothing more than a diversionary tactic: the trade war is fully-on, and it’s been ‘on’ for several months.

The most recent phase of the trade war was marked by an escalation of tit-for-tat tactics between China and the United States. On June 15, US Trade Representative Robert Lighthizer announced a 25% tariff on $50 billion worth of Chinese goods. Then, on July 10, after being asked by US President Trump for a list of Chinese goods that could be hit with additional tariffs, the US Trade Representative outlined a new list of $200 billion worth of Chinese goods that would be eligible for 10% tariffs.

But the caper came just last week on July 20, after China had announced tariffs on US agricultural products. In response, US President Trump said he is prepared to slap tariffs on all goods imported from China; in 2017, the US imported just over $500 billion of goods from China (the net trade balance is around $300 billion). In essence, we’ve arrived at the end game of the first phase. The trade war is cresting and new concerns are rising elsewhere. 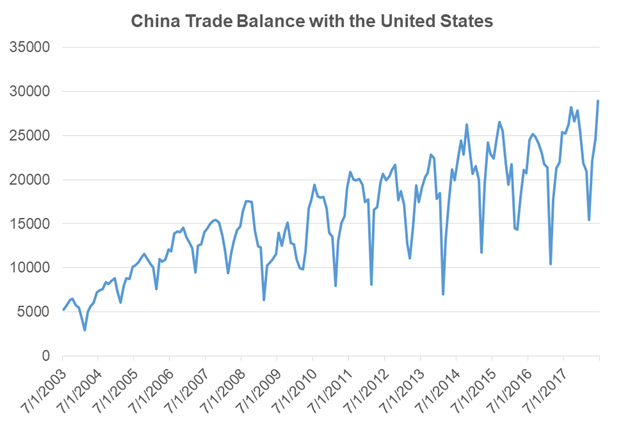 China’s retaliatory responses are limited. It can continue to turn up the pressure on US agricultural exports in an attempt to hit US President Trump’s political heartland, thereby eroding support for him and his trade policies. But China faces a unique situation, for example, whereby nearly 50% of the soybeans it imports are used ultimately as feed for pork; the greater the tariffs, the greater the risk of inadvertently importing food inflation. It’s options are indeed limited.

What is China Doing to Neutralize the Trump Tariffs?

All of this is to say that China has other options outside of fine tuning trade policy via retaliatory tariffs. Market participants need not look further than the Chinese Yuan as perhaps the most potent policy tool available. And, given the movement seen in FX markets recently, there is a strong case to be made that Chinese policymakers have already effectively neutralized most of the impact from the Trump tariffs by simply depreciating the Chinese Yuan versus the US Dollar.

It’s a basic tenet of macroeconomics that exchange rates have a direct influence over trade. It’s of little surprise then that Chinese policymakers are using USD/CNH – intentionally or unintentionally – as a way to fight back against the Trump tariffs. Offshore Chinese Yuan depreciation has accelerated in recent weeks and months, with USD/CNH having risen by +9.2% since its yearly low on March 27 and +2.7% in July alone. 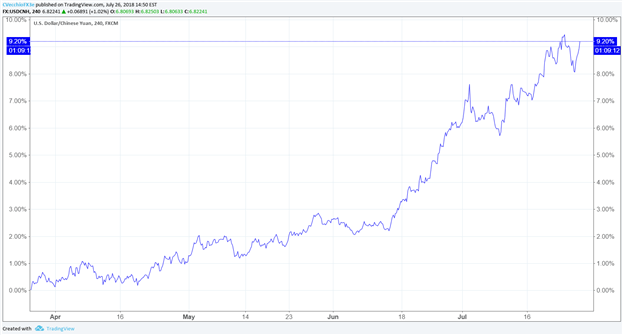 Regardless of the cause – be it higher interest rate expectations coming out of the US pushing out interest rate differentials in favor of the US Dollar, or specific issue with the state of the Chinese economy, or more widespread concern about emerging market currencies – the USD/CNH exchange rate has appreciated enough that it may offset any impact on the US-China trade balance resulting from the Trump tariffs.

Looking at the tariffs discussed above, this means that if USD/CNH appreciates by near +10%, then any negative impact on the Chinese economy – and the intended impact on the US-China trade balance – will be more than neutralized. Accordingly, with USD/CNH having appreciated by over +9% since the March low, any and all efforts by the Trump administration have been effectively futile.

What’s Next for the US-China Trade War?

After a surprising outcome resulting from the meeting between European Commission President Jean-Claude Juncker and US President Trump on July 25, it now seems that the US-China trade war is set to intensify significantly.

As mentioned earlier, it would appear that China is attempting to make the trade war politically costly for US President Trump by levying tariffs on agricultural imports from the US. But now that the European Union has pledged to increase demand for imports like soybeans, it stands to reason that the Trump administration is attempting to shore up one front of the global trade war in order to concentrate its efforts on another.

We are thus forced to conclude that by getting a pledge from the EU to increase soybean imports, the Trump administration is trying to replenish diminished demand from China; and if the plan unfolds as intended, alongside the $12 billion in bailout funds for farmers impact by the drawdown in demand for US exports, then the Trump administration should theoretically be able to dig in deeper against China.

The US-China trade war is still only getting started, especially now that it’s taken on the currency war dimension after a sharp rally in USD/CNH the past few months.