Last Week the Malaysian Ringgit fell, albeit slightly, when a 3-year low local CPI reading crossed the wires. Keep in mind that Malaysia’s central bank (BNM) actually envisions negative headline inflation ahead, making the disappointing data not far off from what the BNM expects. Meanwhile, the Indonesian Rupiah slumped after its central bank left rates unchanged, though its depreciation was largely due to US Dollar gains during the first half of the July 19th trading session.

This past Monday, the US Dollar managed to put in a partial recovery from Friday’s session where President Donald Trump fretted about Fed rate hikes. News over the weekend from US Treasury Secretary Steven Mnuchin that Mr. Trump supports the central bank’s independence allowed for some greenback gains as local bond yields rallied. This thus put some pressure against other ASEAN block currencies like the Singapore Dollar.

Speaking of SGD, yesterday we had local inflation data that mostly beat estimates. In June, Singapore’s headline CPI rate clocked in at 0.6% y/y as expected, but the core reading was 1.7% y/y versus 1.5% anticipated. Despite this, USD/SGD was unimpressed as the result seemed in line with MAS estimates. By the end of the day the pair rose as greenback gains overshadowed the Singapore Dollar.

For the remainder of this week, a lack of critical economic data out of the ASEAN bloc region will leave MYR, PHP, IDR and SGD looking for influences from external factors. Starting with what the greenback is facing this week. So far, the world reserve unit seems to be recovering after being weighed down by Trump last week and there could be room for more gains as those fears abate and local bond yields keep rising.

At the end of the week, the US Dollar will be facing the first projection of second quarter GDP. Growth is expected to clock in at an annualized pace of 4.2% q/q, up from 2.0% in the first. Needless to say, a disappointment here could send the greenback lower as ASEAN bloc currencies like the Philippine Peso or Malaysian Ringgit capitalize on its weakness and vice versa.

Global trade tensions are still hot heading into the remainder of this week. Last week, Mr. Trump warned that he is ready to put tariffs on $505b of Chinese imports. The US Commerce Department also held hearings into the threat auto imports have on national security. On Wednesday, European Commission President Jean-Claude Juncker will meet with Trump to discuss automotive levies. If stocks take a turn for the worse amidst unpleasant developments on these fronts, then sentiment-linked ASEAN currencies could have more room to fall, adding pressure to some central banks to maintain FX stability.

Since we last looked at USD/PHP, we noted the presence of negative RSI divergence. This shows that momentum to the upside is ebbing and is sometimes a precursor to a reversal or consolidation. So far, the latter seems to be the case. The pair has been oscillating in a familiar range between 53.90 and 53.30 which are near-term resistance and support respectively.

Do note that the negative RSI divergence still persists and it does warrant caution as a reversal may follow. From here, a break below support opens the door to test 52.93 which was the highs set back in May. It may come back to establish itself as former resistance new support. On the other hand, climbing above the 76.4% Fibonacci extension exposes 54.60. 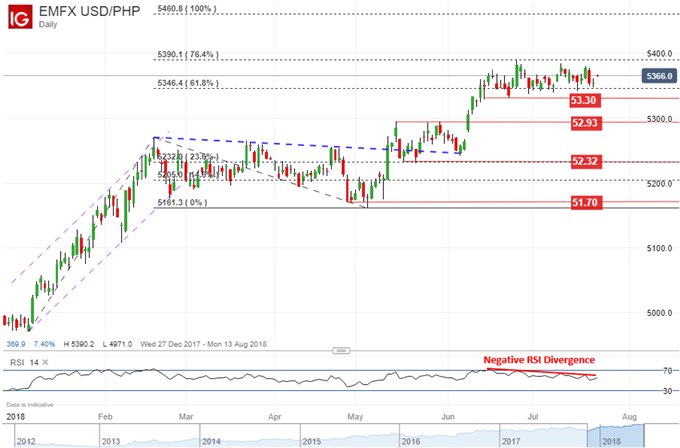