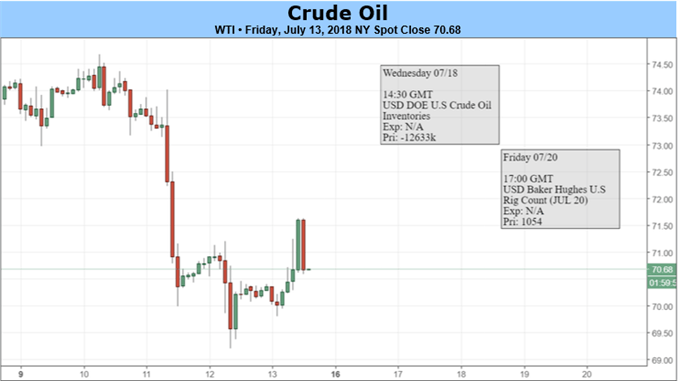 The current uptrend in crude oil is a little over a year old, and traders remain on the fence as to whether the price of Oil is about to take a new leg higher toward $77/bbl for WTI or $89/bbl for Brent. The hesitancy to bid prices higher despite the massive DoE draw on Wednesday and no new oil rigs added on Friday is likely due to the options skew that is pricing less upside potential for oil and weakening physical structure as backwardation lessens.

Another dark cloud hanging over the commodities market is the trade war. The dark cloud was evidenced by China's crude imports falling in June by 12% to 8.39 million b/d, the lowest level since December, per the General Administration of Customs in Beijing.

As of Friday, the weekly loss on WTI & Brent crude was 3.35 & 2.14% respectively, which is up from an intraweek low of 5% after US President Trump applied tariffs on nearly 50% of US imports from China escalating concerns about the US-Sino trade war.

The Massive DoE Drawdown Was the Largest Since September 2016 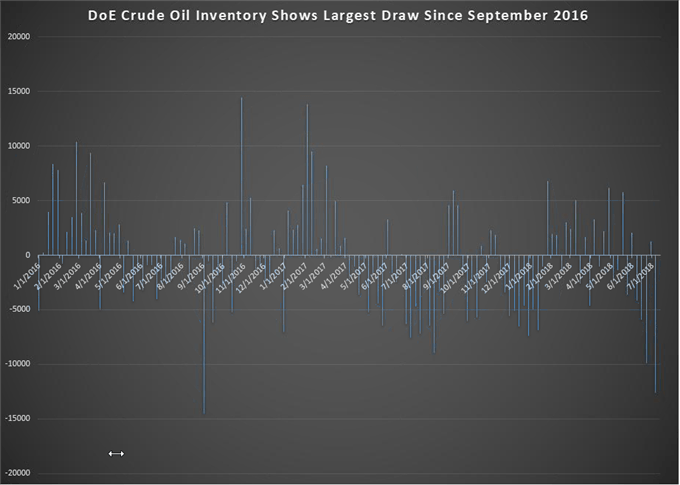 After breaking below $70/bbl on Thursday to a weekly low of 69.23 and the lowest level since late July, WTI crude and Brent have since rebounded though they’re still in the red on the week. Despite the pullback from the July Opening Range high of $75.27 traders are still having a hard time betting aggressively on further sequential weakness. If anything, traders are less bullish, yet, not outright bearish, which aligns with the charts.

One the chart above, WTI bounced off the Ichimoku cloud and above the 50% retracement of the 2014-2016 range as support. The strong move favors continuation of the broad uptrend. The weekly low of $69.23 is an appropriate bias point to hold a bullish view. A break and close below $69.23 from here would warn of further weakness despite the crude inventory drawdown.

Technical resistance, which is important given the recent reversal is coming off of 3-year highs would be at $74.70/bbl, which is the July 10 high. A close above there would align with the chart patterns that a move toward the trendline and 61.8% retracement of the 2014-2016 range near $77/bbl remains in play.