China’s PBOC Seeks to Calm Yuan, Equities ahead of US Tariff Deadline

Chinese regulators have been trying to calm the volatile Chinese market, with both equities and the Yuan plunging over the past two weeks. In specific, five China Central Bank’s (PBOC) officials have commented in a row on the market, ahead of July 6, when the US tariffs on $34 billion Chinese goods will take effect.

Following the remarks, the Chinese Yuan (CNH) rebounded on Wednesday, after dipping more than 1000 pips against the U.S. Dollar within two days, and more than 2000 pips in total since last week; Shanghai Composite Index continued to drop, though failed to break below the previous swing low.

Here are what the top Chinese policy makers said and did, in the effort to boost the market confidence:

PBOC Governor Yi Gang told on July 3 that “we have been closely following recent moves in the FX market, which were largely driven by a strong Dollar and external uncertainties. The regulator will keep the Yuan relatively stable and at reasonable levels”.

The Governor also commented on Chinese equites on June 19, saying that “the volatility was mainly led by sentiment; investors should stay rational and calm”.

The Head of PBOC’s Financial Research Institute, Sun Guofeng, told that “China will not use the Yuan as a weapon in the trade conflicts with the US. Yuan’s recent devaluation was due to changes in market expectations amid rising external uncertainties, rather than intended guidance of the Central Bank”. Sun provided the above comments on July 3 in response to Bloomberg’s inquiry.

A Review: US-China Trade War: An Inevitable Conflict and The Impact on Equities, FX

PBOC Senior Advisor Sheng Songcheng said that market participants “should not read too much into Yuan’s recent decline. It was largely driven by sentiment.” Also, he called for “a rational view towards US-China trade disputes”. “The United States’ trade protectionism is not just against China, but to many other countries. Yet, the history shows that the global economic development will need to rely on cooperation and collaboration between countries.”

PBOC’s Monetary Policy Committee Member Ma Jun told on July 3 that “regulators will avoid to use excessive measures to cut debt in the economy”. Reducing leverage became a regulator’s focus in late 2016 and was then set to be a top national priority in 2017. Tightened liquidity and fears around de-leveraging are considered to contribute to the aggressive selling in Chinese equities recently.

PBOC announced to cut reserve requirement ratio (RRR) by 0.5% on June 24, which is expected to add 700 billion yuan to the market and ease concerns on the liquidity shortage. Specifically, the PBOC targets at accelerating the pace of debt-to-equity swaps and increasing lending to small-sized firms. The measure will come into effect on July 5, one day before the US tariff deadline.

China’s top policymakers met at the cabinet-level Financial Stability and Development Commission (FSDC) on July 2,to cope with the country’s internal and external financial risks. This is the first time that new committee members met together:

China’s Vice Premier Liu He is the Chairman. Liu is the premier who oversees the country’s financial sector; he is also the leader on China’s end in the US-China trade negotiations.

The policymakers said in a statement that “China is capable and confident to prevent systematic risks. Multiple departments will collaborate to deal with them. Overall, the risks are under control.”

Download a free trading guide to improve your knowledge of trading the news, and learn about the top trading opportunities in the third quarter of 2018.

THE FALLING PRICES AND CAPITAL OUTFLOWS 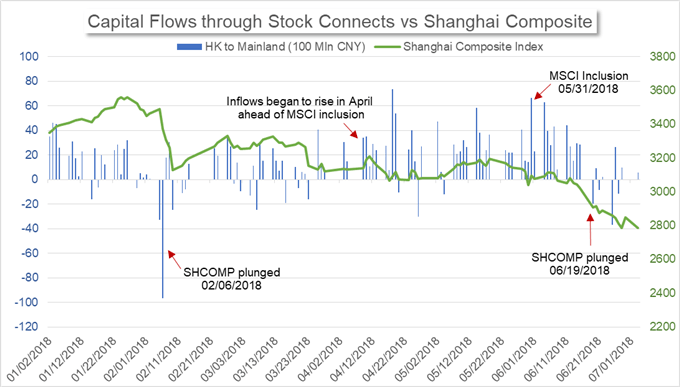 Since June 19, when Chinese equities began to plunge, overseas investors began to reduce their holdings in the Yuan-denominated assets. This reversed the capital-inflow trend, driven by A-shares’ official inclusion in MSCI indices and started in early April.

A rise in capital outflows coupled with falling equity prices is not uncommon for China. In early February, Shanghai Composite Index tumbled; investment withdrawals through the stock links jumped as well.