The second quarter has come to a close, and a market of volatility and uncertain trends now transitions into the latter half of 2018. With sweeping fundamental concerns such as trade wars, the stability of the Euro-area, the path of Brexit and the health of global growth itself plauging the markets; the outlook for the third quarter looks anything but quiet. 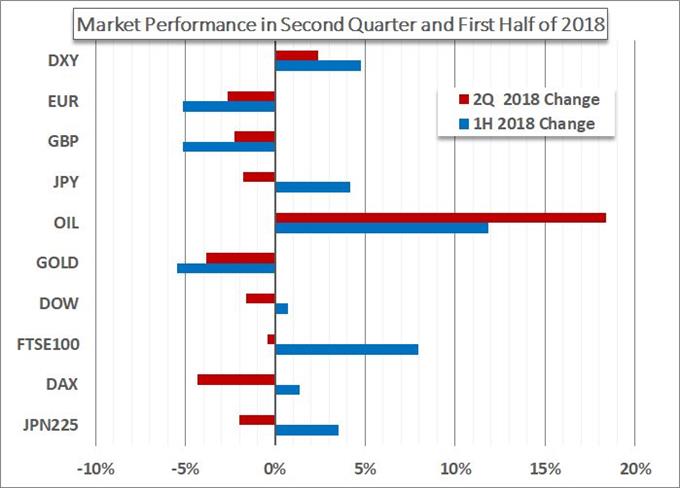 US Risks Isolating the Dollar, Boosting its Risk

Looking ahead to the second half of the year, there is certainly a course the dollar could weave to earn further gains. That said, the qualified drivers are unlikely to arise – or more importantly coincide – in order to facilitate genuine support for the currency. Trade wars, the wavering in global sentiment and convergence of monetary policy paths create a difficult environment for bulls.

Coming off a nasty slide through the previous quarter, the Euro confronts a list of uncertainties that it will have to face in its search for trend into the 3Q. The risk of Italy undermining European unity will compete with the ECB's policy intentions and EU's engaging in trade wars with the US to offer a clear run for the shared currency.

The Pound beat a significant retreat through the 2Q of 2018, and there are still clear issues it will have to deal with heading into the new quarter. The currency has two major problems: the perception that the UK is bungling its withdrawal from the European Union and diminishing prospects of UK interest-rate increases this year.

The Japanese Yen starts a new calendar quarter under clear pressure from the US Dollar, which is translating into weakness for the Japanese currency through other crosses. Will trade wars unsettle risk trends and spur a safe haven swell for the Yen or can sentiment persist to keep the currency capped while tariffs add new worries to contend with?

Equities staved off a collapse that threatened to wipe out years of gains in the first quarter of the year, but the outlook still does not look particularly rosy. Trade wars have gained serious traction and investors are growing more cognizant of their exposure by the day. Can we return to fresh record highs or is the inevitable finally upon us?

Crude oil has soared through the first half of 2018 despite the emergence both supply and demand conflicts. Between the United States' record output and OPEC+ members vowing production increase compared to new concerns over the forecasts for economic growth, there will certainly be a conflict between speculative and fundamental interests for this commodity moving forward.

Gold prices have faced a marked selloff in the second quarter of 2018 as the Federal Open Market Committee (FOMC) sticks to its cycle of rate hikes. In that same vein, the precious metal stands at risk of facing further headwinds over the coming months as the central bank appears to be on track to deliver another 25bp rate-hike in September.