This week, the USD/CNH broke above a long-term downtrend held since the mid of 2017, indicating a reversal in a longer time frame; the Yuan also lost against the EUR, JPY, GBP and CHF. Looking forward, the USD/CNH will likely continue the bullish trend (bearish for the Yuan); volatility in the pair is expected to elevate as the US and China have resumed tariff battles despite of rounds of negotiations.

Recent Chinese gauges signalled concerns in the economy. The Fixed Assets Investment fell to a record low level since it was ever quoted in 1999; Private Investment in Fixed Assets dropped back to the lowest level in 2018. These leading investment indicators reflect that private companies are less willing to expand their business and the amount of public infrastructure projects dropped as well; both could lead to a falling employment rate.

Also, consumer purchases continue to show a lack of momentum: Retail Sales dropped to the lowest level in May since June 2003. The weak Chinese investment and consumption have contributed to the weakness in the Yuan. Significant improvements are less likely to be seen soon as it would take time and efforts. This makes the Yuan vulnerable against the U.S. Dollar; the latter has gained support from improved US economic conditions and Fed rate hikes.

In the near term, volatility in the USD/CNH could rise amid the resumed US-China trade war. Despite of rounds of negotiations between senior U.S. and Chinese government officials over the past few weeks, the two parties failed to reach a consensus. On June 15, the U.S. issued the final list of approximately $50 billion Chinese imports that will be placed with a 25% tariff. A major focus is on “Made in China 2025” policy related products.

Correspondingly, China announced on the same day that it will implement a 25% tariff on $50 billion US imports. The targeted U.S. goods are agricultural products, cars and aquatic products. China will start to collect tariffs on the first batch of $34 billion US goods from July 6, following the effectiveness of U.S.’ tariff on the same amount on the same day. The rest will be determined once the U.S. releases its plan on the second batch. In the coming week, the two parties could reveal more tic-for-tac attacks against each other and drive market moves. 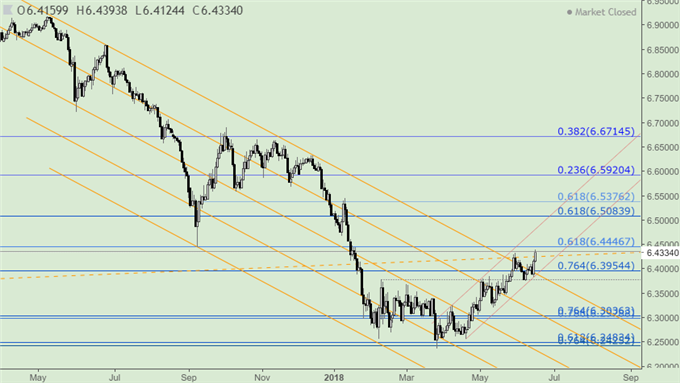 From a technical point of view, the USD/CNH has closed above the long-term downward channel, indicating a reversal (bearish for the Yuan). If the pair can climb above 6.4352-6.4447 region, the next target to watch is 6.5084.