Last week, the Philippine Peso and Indonesian Rupiah were some of the worst performing ASEAN bloc currencies against the US Dollar. The former was hurt by rather disappointing local trade data. In April, Philippine exports contracted 8.5% y/y which was the largest drop since July 2016. This helped contribute to a wider-than-expected trade deficit of $3615m. Meanwhile, Bank of Philippine’s Deputy Governor Diwa Guinigundo noted that inflation expectations are easing despite the most recent elevated CPI result.

Meanwhile, hawkish comments from Bank of Indonesia failed to support the currency. Governor Perry Warjiyo said last week that more tightening may be required, adding that “you have to pre-empt the uncertainty”. Then, on Friday the central bank forecasted inflation at 2.75% y/y in June. This would be down from the 3.23% result back in May. If disinflation does indeed follow suit, this may reduce the need for the central bank to continue raising rates. However, this may not be the case given what is in store ahead abroad.

All eyes will be on the FOMC interest rate decision on Wednesday. There, the Fed is widely anticipated to raise rates to a range of 1.75% to 2.00%. But such an outcome would not be much of a surprise. Rather, it is their forward guidance that will likely generate US Dollar volatility. The central bank will offer official forecast updates and a follow-up press conference with Chair Jerome Powell. Signs that the Fed may pursue further tightening in the year ahead can bode well for the US Dollar.

This can further add pressure to ASEAN bloc currencies to depreciate and lately, their central banks have been spending foreign reserves to keep them up as anticipated. For example, the amount of foreign reserves in Malaysia, the Philippines and in Indonesia declined last week. Notably, in the Philippines, they dropped to their lowest since November 2014. In Indonesia, FX reserves fell to their smallest amount since March 2017. A rising greenback adds inflation pressures for these countries as well as Singapore.

Speaking of, US President Donald Trump has arrived in Singapore ahead of talks with North Korean Leader Kim Jong Un on June 12. Mr. Trump said that he is feeling ‘good’ about it. His aim is pressing for denuclearization of the north. A result that favors an outcome closer to his goal stands to improve sentiment, perhaps sending ASEAN bloc currencies such as the Singapore Dollar and Malaysian Ringgit. More cooperation reduces the chance of hostility. In the past, North Korea missile launches have disrupted sentiment.

USD/PHP Technical Analysis: Climb to New 2006 High Could Use Confirmation

On a daily chart, USD/PHP pushed above near-term resistance at 52.93 to a new 2006 high. However, negative RSI divergence is showing that momentum to the upside is slowing. This warns that prices may turn lower ahead, if not consolidate. With that in mind, more progress higher in USD/PHP would be ideal to argue that the pair is resuming its dominant uptrend in January.

From here, immediate resistance is the 50% midpoint of the Fibonacci extension at 53.11. A climb above that exposes the 61.8% level at 53.46. On the other hand, 52.93 could stand in the way as former resistance now support. A break below that places the 23.6% extension as the next target at 52.32. In addition, a descending line from February (which acted as resistance initially) may come back to act as support. 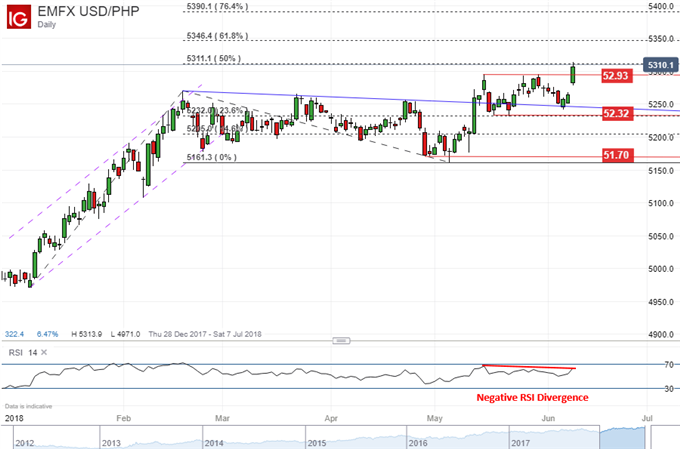