On Friday, we had the release of the May jobs report, with Non-farm Payrolls coming in at +223k, above the +190k consensus estimate. The unemployment rate ticked down to 3.8% from 3.9%, while wage inflation via average hourly earnings edged higher to 2.7% from the prior month’s reading of 2.6%. The S&P 500 futures knee-jerked lower initially on the upbeat report, but recovered and extended gains throughout the day.

Looking ahead to next week the calendar is light in terms of ‘high’ impact data releases outside of the release of ISM Non-Manufacturing data due out on Tuesday. For a schedule of all data releases along with estimates, check out the economic calendar.

The S&P 500 took a hit on Tuesday and tested the trend-line running lower off the record high with success. There is room for the market to trade higher if it can maintain last week’s low at 2676, but it may chop around more before doing so; 2742 is the breakout level to watch. A choppy trend higher may be under way since April, but still remains fragile with momentum generally lacking and a broader topping scenario still on the table. 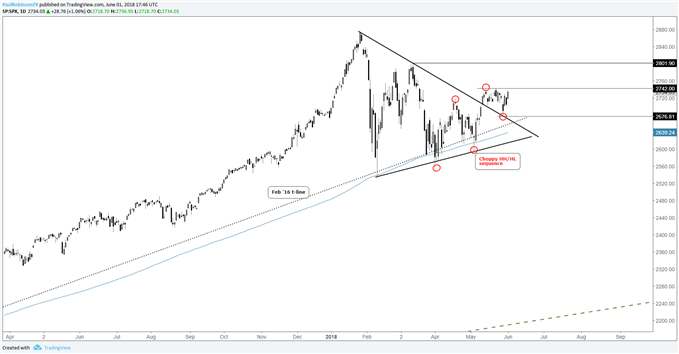 Last week we saw some selling pressure with political turmoil in Italy hitting both the euro and Eurozone stocks, which now has the once strong inverse relationship between currency and equity benchmarks now correlated. Italian threats have been quick to upheaval the relationship, and its difficult to tell how much the weakening euro, if it is to continue to be weak, will be a boon for the DAX anymore. Looking ahead to the calendar, there are no ‘high’ impact data events on the docket. The following week we will hear from the ECB.

The DAX took a hard spill off the May high, how it responds this coming week could be telling. Support under 12600 is holding, but a failure to trade above the 12900/13000 region could signal a broader decline is underway. For now, the market is caught between support and resistance, making the outlook a bit murky at the moment.

As is the case around the globe, the calendar is light next week in terms of ‘high’ impact data, with risk trends as a dominant theme for the FTSE. As was the case with the euro and Euro-zone stocks, the FTSE saw no benefit from a weakening pound, this may continue. The BoE/TNS Inflation figure on Friday highlights the week in terms of key data. For release times of all data, check out the economic calendar.

The FTSE, as we warned the week before, could be in for a decline despite having at that time just notched a new record close. The trend-line running over from last June proved to be formidable resistance. In the week ahead, we’ll be looking to the 7600/550 region as important support. A hold will likely be needed to sustain higher levels, otherwise we could see a deeper decline start to develop.