CAD Faces Volatility on BOC, Can Options-Derived Levels Tame it?

Amidst aggressive risk aversion in the markets on Italian political jitters, more intense price action for the Canadian Dollar seems ahead as USD/CAD stands at a critical junction point. Looking at the chart below, USD/CAD 1-day implied volatility is not only the most compared to its major peers, but it is also at its highest since November 8th, 2016 (the day of the US Presidential election). The similar 1-week reading is also elevated and at its highest since March.

Taking a glance at the economic calendar, the markets are bracing for Wednesday’s Bank of Canada monetary policy announcement. However, rates are anticipated to remain unchanged at 1.25% and what will be more interesting is their forward guidance. In regards to this aspect, there could be room for some disappointment in rate hike expectations.

Overnight index swaps are pricing in an almost 90 percent probability that the central bank will increase its main lending rate at least once by the end of the year. But there have been some recent developments that could encourage the BoC to err on the side of caution, sending the Canadian Dollar lower against its major counterparts.

For one thing, economic data out of Canada has been tending to underperform relative to economists’ expectations this year so far. On May 18th, we had a worse-than-expected local CPI data. Second, the recent collapse in oil prices on output boost expectations from Russia and Saudi Arabia could potentially hurt local growth. Finally, NAFTA negotiations are still ongoing and a final outcome is still uncertain as Canada’s Prime Minister Justin Trudeau said on Tuesday that no deal is better than a bad deal.

While this scenario paints a picture for USD/CAD to keep rising, technically speaking the pair is facing a critical barrier amidst reversal warning signs. If you take a look at the weekly chart below, you will find that it is testing a falling trend line that goes back to January 2016 which could act as resistance if the pair gets stuck. Simultaneously, negative RSI divergence warns that momentum to the upside is ebbing when comparing current levels to their previous peak back in March. 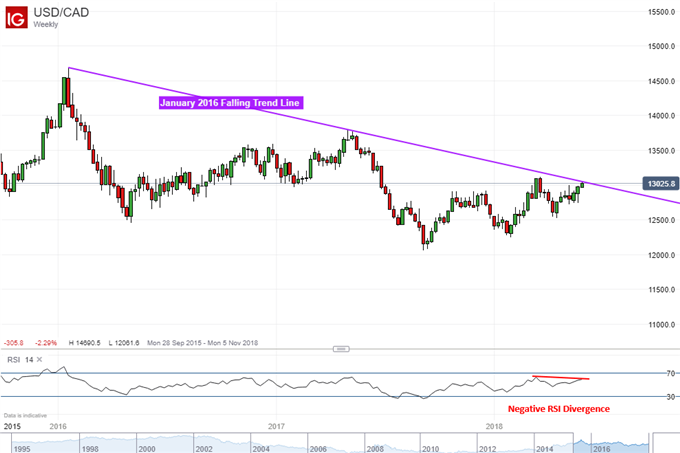 On the daily chart, you can get a closer view of USD/CAD’s dilemma. Negative RSI divergence is also present here and warns that prices could soon turn lower if not consolidate around critical resistance.

Nevertheless, a push above resistance exposes the “day range high” around 1.3136. This area is also conveniently closely aligned with the March 19th high and could end up where USD/CAD stops rising for the day if the fundamental scenario laid out does indeed unfold. A push above that exposes the “week range high” at 1.3190.

On the other hand, if the technical reversal warning signs prove correct and USD/CAD falls, then immediate support could be the “day range low” at 1.2914. A break below that leaves the “week range low” at 1.2860 as the next target. 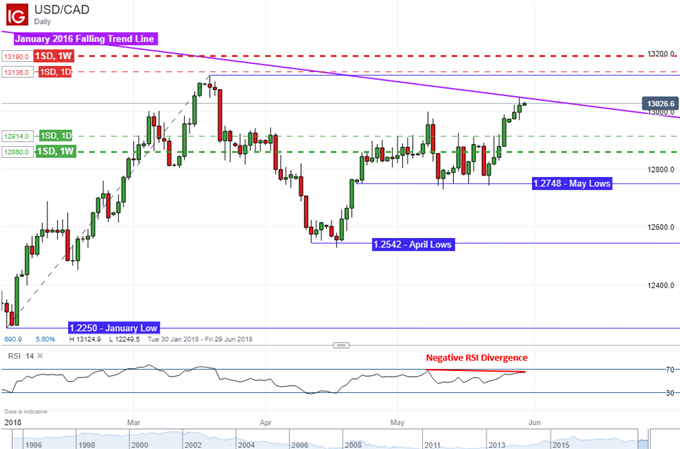