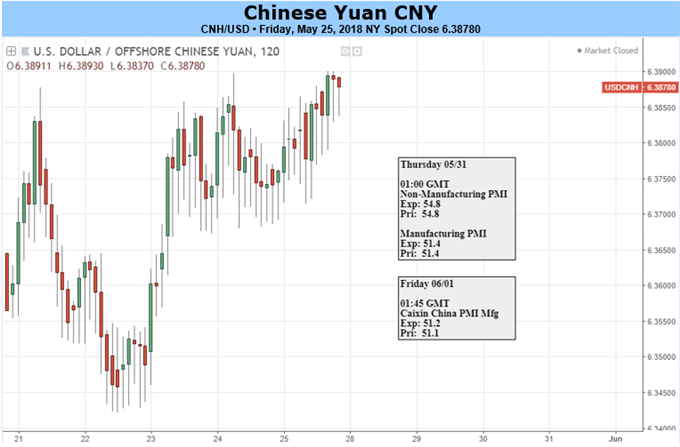 The Chinese Yuan had a mixed performance against major currencies over the past week: it advanced for the seventh consecutive week against the Euro while lost to both the U.S. Dollar and Japanese Yen. Looking forward, the Yuan may gain momentums from capital inflows around A shares’ MSCI inclusion. Cloud around US-China trade disputes remains despite of US Commerce Secretary’s upcoming visit to Beijing. China’s manufacturing sector may show further expansion in May, adding confidence to the economy.

MSCI’s inclusion of Chinese A shares will not only lead to this global institution’s direct purchases of Chinese stocks, it will also increase holdings of investors who have been following MSCI indices. Since April, capital inflows have increased significantly through two major channels: Shanghai/Shenzhen – Hong Kong Stock Connect. On May 1, China enlarged the capacity of these channels to four times of what they were in the past. Foreign purchases in Yuan-denominated equities are expected to remain high around June 1, when the inclusion takes effect.

US-China trade development was on a roller-coast ride this week. The two sides seemed to reach a deal to avoid tariff attacks after released a joint statement on Saturday; yet, four days later Trump raised doubts on the agreement and call it “too hard to get done”. On Friday, US Commerce Secretary Wilbur Ross confirmed a trip to China from June 2 to 4, for the third round trade talks. The two parties are expected to finalize details of China’s increased purchases in American products, in specific energy and agricultural products.

The real challenge lies in fundamental discrepancies that the Trump administration has touched on. Many issues such as market entrance barriers, “Made in China 2025” and industrial policies reflect a core different view: how China should move towards a market-oriented economy. Most disputes can be dated back to when the two parties began to trade. Fully resolving them in a couple of months seem to be impractical. The road for US-China trade talks will likely continue to be bumpy, bringing a mixed impact to market.

Next week, China will release both official and Caixin manufacturing PMI prints for May. Amid ongoing trade disputes, the official PMI dropped slightly in April to 51.4 but still higher than the average in the first quarter and better than in the same month of last year; it is expected to hold in May. Caixin PMI, measuring relatively smaller companies, increased in April and is expected to rise further in May. If continued improvement is seen, it will add evidence to a sustainable recovery.