Yuan May Gain Ahead of MSCI Inclusion; Risk from Trade Disputes Remains 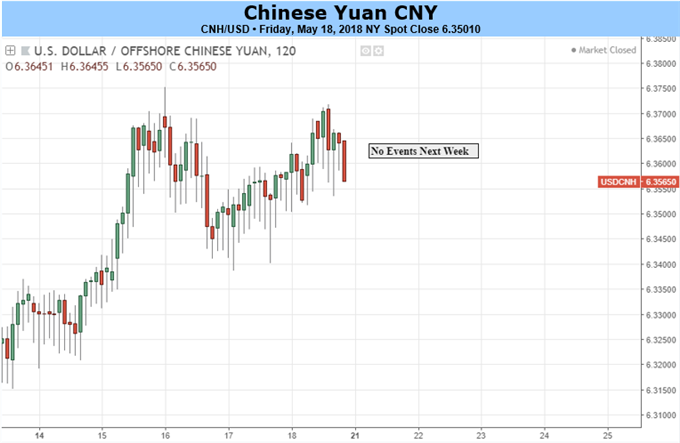 The Chinese Yuan lost -0.49% against the U.S. Dollar in the offshore market, while it gained against most of other major currencies: up +0.77% to Yen, +0.98% to Euro and +0.13% to Canadian Dollar. Looking forward, two clocks are ticking for China: A shares’ official inclusion in MSCI indices, a positive development; and the unresolved trade disputes with the U.S, a big challenge. In addition, German Chancellor Angela Merkel will pay a visit to Beijing, which could bring a mixed impact.

MSCI announced Tuesday that 234 Chinese stocks will be added to its global and regional indices on June 1. The inclusion of these Yuan-denominated equities is expected to lead to a significant amount of capital inflows: a forecast of the initial flows by China International Capital Corporation is $10.2 billion; BOC International expects it would be 61.0 billion Yuan ($9.6 billion); Caixin forecasts it would be between $17-18 billion. Purchases in the Yuan-denominated assets will likely boost the demand in the Yuan and drive Yuan rates higher.

China’s Central Bank introduced a series of measures Friday to support Yuan liquidity in the offshore market. The timing of the launch hints a likelihood that the regulator is preparing for a large increase in the Yuan demand around MSCI’s inclusion. Under the new measures, Yuan clearing banks can more easily use their onshore Yuan reserves to meet the offshore liquidity needs. Also, the regulator improved the exchange rate conversion mechanism for stock links, a major channel for foreigners to invest in onshore Yuan-denominated assets.

The tensions around U.S.-China trade disputes saw eased; yet, concerns remain whether the two parties can resolve major disputes, before U.S.’s threat of posting tariffs on at least $100 billion Chinese products comes true. On one hand, the two sides have maintained constant and high-level talks: China’s Vice Premier Liu He led a group of senior Chinese officials and visited Washington for a round of negotiations this week; just two weeks, US Treasury Secretary brought his “U.S. team” to Beijing for key trade meetings. Positive development is seen as well: China’s Commerce Department withdrew the anti-dumping investigation on American sorghum Friday, which was initiated in early February when tensions were elevated.

On the other hand, China’s Foreign Ministry denied that China has proposed to increase annual spending on American goods to $200 billion. Earlier, U.S. President Donald Trump asked Beijing to cut U.S. trade deficit with China by $200 billion by the end of 2020. Using U.S.’s 2017 data, this means 53% of the $375 billion deficit will need to be reduced; if using the Chinese data ($278 billion deficit), the proportion to be cut is 72%, even higher. Whether they two parties can reach a middle point on such a demanding request and where it will be are still questions. This adds risks to the Yuan rate.

German Chancellor Angela Merkel will visit Beijing on May 24 to 25 and meet Chinese President and Premier. In terms of trade, Germany has a complicated relationship with China: The two have both been attacked by Trump administration regarding trade practices and thus they could be allies; however, they have disputes as well. For instance, the EU has launched anti-dumping measures against Chinese steel. If China can find more common interests with its largest trading partner in Europe, it may add confidence to its import and export industries, and thus is good news for its economy and the currency.