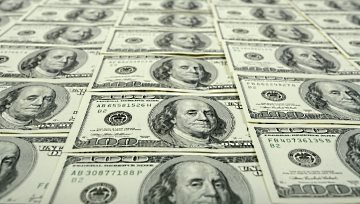 ASEAN bloc currencies like the Singapore Dollar and Malaysian Ringgit succumbed to selling pressure against a stronger greenback last week. Firming hawkish Fed monetary policy expectations, as signaled by rising local government bond yields, likely drove this dynamic. It concluded with the first estimate of US first quarter GDP topping expectations. But not all currencies suffered from this region against the greenback.

The Philippine Peso gained as the PCOMP Index (Philippines Stock Exchange PSEi) rose to its highest since April 23rd. This followed news that S&P revised the country’s outlook to positive from stable. The Indonesian Rupiah also appreciated against its US counterpart by the end of last week. Bank of Indonesia stepped in to maintain Rupiah price stability after USD/IDR rose to its highest since early 2016. This also followed the central bank leaving rates unchanged in April for a seventh month in a row.

Week Ahead: More US Data, Indonesian and Philippine Inflation Reports Too

Similar to what we saw last week, ASEAN bloc currencies may be vulnerable to economic developments out of the world’s largest economy. There, throughout the week we will get the Fed’s preferred measure of inflation, the FOMC monetary policy announcement and a jobs report. Since the middle of this month, data out of the US has been increasingly outperforming relative to economists’ estimates. If this trend continues, then the greenback may continue putting pressure on its ASEAN counterparts.

Locally speaking, on Wednesday the Indonesian Rupiah will face its country’s inflation report. Indonesia’s headline CPI rate is expected to tick higher to +3.5% y/y from +3.4%. Such an outcome would put the pace of inflation directly in the middle of the central bank’s 3.5 ± 1 percent target. With that in mind, prospects of stable inflation may allow USD/IDR to focus on developments on the base currency side of things as mentioned earlier.

What could be more eventful is another inflation report out of the Philippines. On Friday, the country’s headline rate is estimated to jump to +4.5% y/y in April from +4.3% in March. This would mean the fastest pace of inflation since September 2011. In addition, this would continue bringing price growth further away from the upper boundary of the central bank’s inflation target (3.0 ± 1 percent). If this is indeed the reality, then USD/PHP could continue falling.

This is because Philippine’s central bank (Bangko Sentral ng Pilipinas, or BSP) noted in their most recent monetary policy announcement that they are closely watching price growth. The BSP lowered 2018 inflation projections to +3.9% y/y from 4.3%. Signs that prices are heading in the wrong direction of their estimates might spark some hawkish monetary policy expectations, boosting the Philippine Peso.

On a daily chart, USD/PHP has broken below a near-term rising trend line from mid-February. Leading into this break, the pair appeared to level off after ascending in a rising channel. From here, near-term support is the 38.2% Fibonacci retracement at 51.56 followed by the 50% midpoint at 51.20. On the other hand, near-term resistance is the 23.6% level at 51.99. A push above that exposes the 14.6% minor retracement at 52.26. There are warning signs though on the weekly chart that USD/PHP may continue falling. 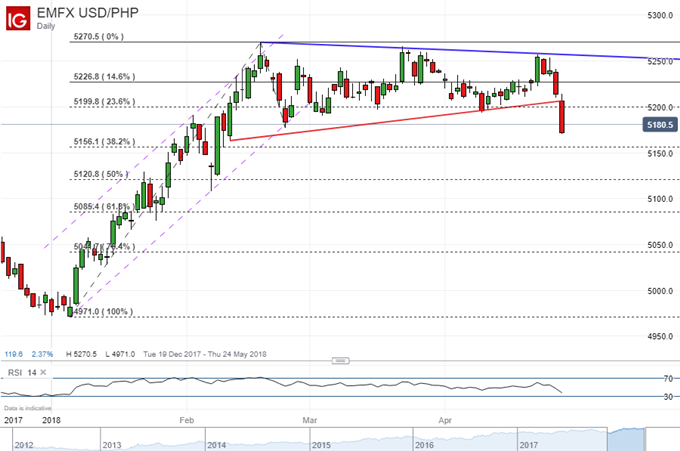 On a weekly chart, the decline in USD/PHP has been accompanied with negative RSI divergence. This shows that momentum to the upside is slowing and could potentially lead to more declines down the road. In such an outcome, confirmation would still be ideal to argue that the dominant uptrend from the beginning of the year has indeed been reversed. 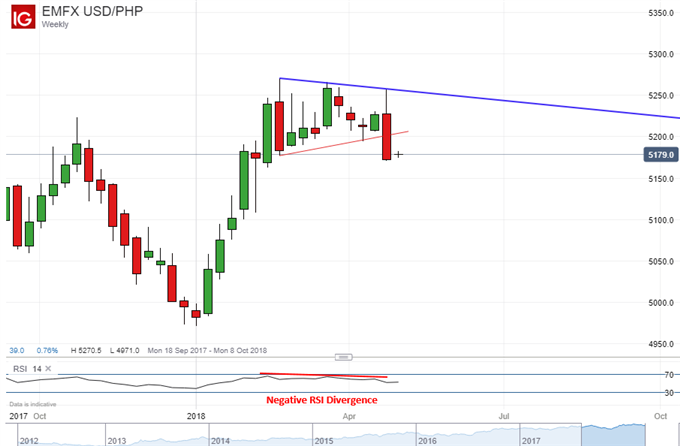 To contact Daniel, use the comments section below or @ddubrovskyFX on