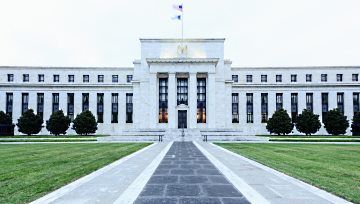 Just getting started trading the Singapore Dollar? See our beginners’ guide for FX traders to learn how you can apply this in your strategy!

The Indonesian Rupiah and Singapore Dollar came under selling pressure against their US counterpart towards the end of last week. Hawkish Fed commentary from Board of Governors member Lael Brainard helped push local bond yields higher. Simultaneously, the S&P 500 declined. This kind of trading environment also didn’t bode well for some other sentiment-linked ASEAN bloc currencies.

With the markets appearing to refocus on monetary policy developments out of the US again, the incoming week could bring with it more on this front. On Friday, we will get the first estimate of US GDP for Q1. The annualized rate of growth is expected to slow to 2.0% q/q from 2.9%. Keep in mind that data out of the country has been tending to underperform since this month began.

This opens the door for a downside surprise and may present a problem for the greenback. With Fed policymakers giving positive outlooks on the economy, they consequentially set higher expectations for incoming economic statistics. If the GDP figures do disappoint, then the Malaysian Ringgit and or the Philippine Peso might benefit from US Dollar weakness as a result.

Keep an eye out for how risk trends continue to unfold as well. A catalyst for these might come from more US earnings (Alphabet/Google is due on Monday). French President Emanuel Macron will be visiting the to meet with Donald Trump. On Wednesday, leaders of the ASEAN member states begin a summit that goes through April 28th. The former two might address topics such as global trade and tariffs.

Outside of the world’s largest economy, Hong Kong’s March trade balance report could spike some volatility in currencies like the Singapore Dollar. This is because its associated country has a key trading relationship with Hong Kong. According to the World Bank, the latter was a destination of about 12.61% of Singapore exports. If imports rise in HK on Thursday, which they are expected to by 5.2% y/y, then that may bode well for the Singapore unit.

Speaking of, one of the first local releases this week will be March’s Singapore CPI report. The core inflation rate is expected to maintain at +1.7% y/y. Keep in mind that at their most recent policy announcement, the Monetary Authority of Singapore (MAS) shifted unexpectedly to a more hawkish stance in part to accommodate their upward expectations on inflation. Needless to say, if CPI goes in the opposite direction of what the MAS expects, then USD/SGD may have some room to rise.

On a daily chart, USD/SGD appears to have pushed above a near-term falling resistance line that dates back to February. Leading into the push higher, positive RSI divergence emerged which showed ebbing momentum to the downside. Typically, this kind of behavior is a precursor to a reversal in prices or consolidation.

To find out that answer, we should look at upcoming resistance at 1.3191. This is because USD/SGD consistently found itself struggling to push above it in the past. If the pair does manage to break free, then the next target would be around 1.3252 on the chart below. A push above that exposes the February 9th high at 1.3339. 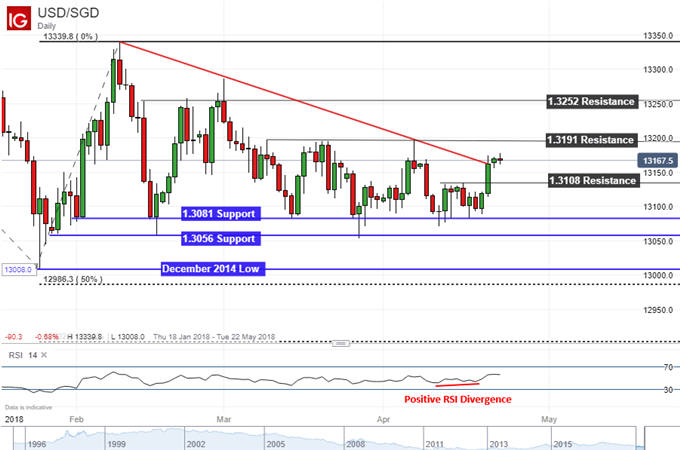