Build confidence in your own USD/IDR strategy with the help of our free guide!

Last week, the Singapore Dollar was one of the strongest performers in the ASEAN bloc relative to its US counterpart. Meanwhile, the Malaysian Ringgit could have fared better. The former was briefly supported by April’s hawkish Monetary Authority of Singapore (MAS) policy statement. There, the MAS adopted a gradual appreciation stance for their currency. Despite this, there may still be a chance that USD/SGD continues climbing.

As for the latter, the ringgit seemed to be under the pressure of some uncertainty around the upcoming Malaysian general election which is set for May 9th. It looks to be a showdown between current Prime Minister Najib Razak and opposition Mahathir Mohamad. The latter has been capitalizing on a scandal surrounding Najib on allegations of embezzlement. Meanwhile, the FTSE Bursa Malaysia KLCI recovered as sentiment improved towards the beginning of last week as trade war fears ebbed. 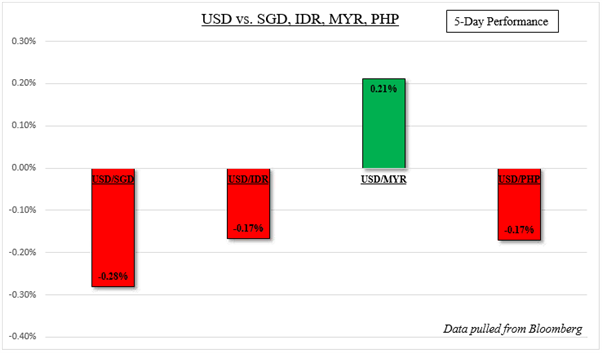 Looking ahead, this week is filled with event risk both from the domestic and external side of things. Starting with the former, we will get March’s Indonesia trade balance on Monday. The deficit is expected to contract to -$71m from -$116m in April. Then, on Wednesday we will get March’s Malaysian headline inflation rate. Prices are expected to increase 1.6% y/y from 1.4%. Bank of Negara Malaysia (BNM) does expect downward pressures on inflation in the near-term and it sees current policy as consistent for growth. So even a disappointment in the data may not offer a lasting response in the Malaysian Ringgit.

Speaking of monetary policy, on Thursday we will get Bank of Indonesia’s rate decision. The central bank is expected to leave the seven-day reverse repo rate unchanged at 4.25%. This follows previous measures taken from the bank to ease policy which was seen as ‘adequate’ for economic momentum. Changes to their forward guidance may spark some volatility in the Indonesian Rupiah. Then, on Friday BNM’s weekly foreign reserves will cross the wires. The central bank has been steadily acquiring reserves since early 2017 as the ringgit appreciated. The latest reading showed them rising by the most since March 2015.

Outside of local data, all eyes will be on China’s first quarter GDP release on Tuesday. This is because the country is a major trading partner for Malaysia, Singapore, Philippines and Indonesia. Economic data out of the world’s second largest economy has been deteriorating relative to economists’ expectations as of late and this opens the door for a downside surprise. Keep in mind that the annualized rate of growth is expected to remain unchanged at 6.8%. If the former occurs, currencies like the Singapore Dollar and Indonesia Rupiah may fall and vice versa.

Another important economic statistic will be Wednesday’s Japanese trade balance. Like China, the country has important trading relationships with most of the aforementioned countries. The surplus and exports are expected to increase. Similar to China, data out of Japan has also met the same underperforming fate as of late. Then on Thursday, the Fed will release its beige book which is a survey of regional economic conditions. If it echoes optimistic tones from last week’s FOMC minutes and stocks fall on Fed tightening prospects, then sentiment-sensitive ASEAN currencies like the Malaysian Ringgit or Philippine Peso may fall.

Lastly, keep an eye out for more geopolitical tensions that can impact sentiment suddenly. On Monday, EU foreign ministers will meet to discuss the situation in Syria. Tensions on this front have abated recently but a nasty surprise may quickly turn things upside down. Then on Tuesday, Japan’s Prime Minister Shinzo Abe will be meeting with US President Donald Trumpto discuss matters such as North Korea and US import tariffs on metal. Japan is temporarily exempted from the tariffs. If more positive developments on this front encourages a ‘risk on’ environment, then sentiment-sensitive currencies such as the Malaysian Ringgit may benefit.

USD/IDR Technical Analysis: Getting Ready for a Break?

On a daily chart, USD/IDR has found itself approaching what could be a major breakout. This is because prices are approaching the convergence of a near-term falling and a rising line (see chart below). If prices break higher, 13,835 could stand in the way as immediate resistance. A push above that exposes the March 9th high at 13,906. Meanwhile, a break below support places the 23.6% Fibonacci retracement at 13,755 as close support. A break below exposes the 38.2% level at 13,661. 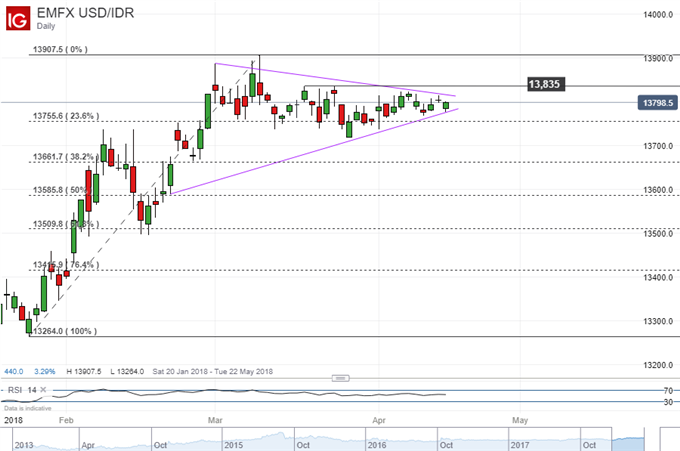 On a weekly chart, negative RSI divergence emerged as USD/IDR stalled while trying to push higher. This indicates momentum to the upside is decreasing and could mean that prices may soon turn lower. If they do, confirmation will still be needed. 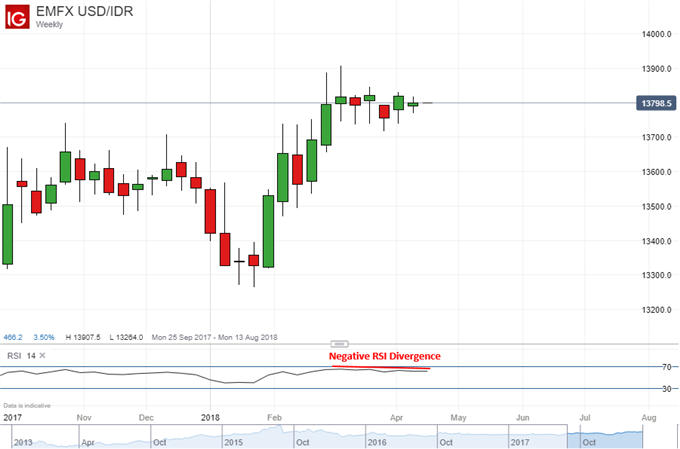