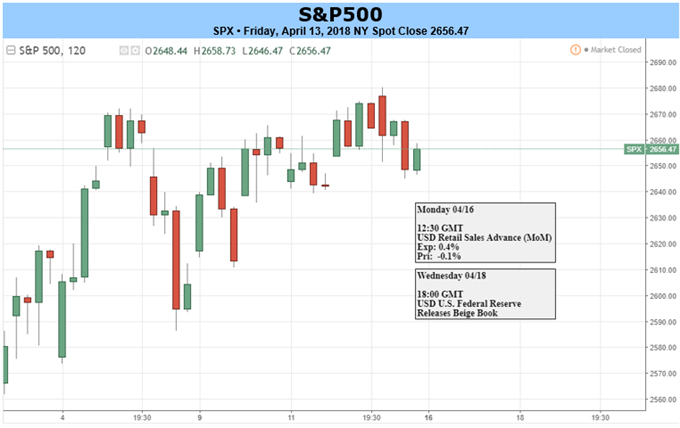 Looking ahead to next week, the calendar is light on data with the only ‘high’ impact release arriving on Monday via the March Advance Retail Sales figures. Geopolitical tensions with Syria/Russia and ‘trade war’ talk could continue to be a threat on the headline front. For details of all economic releases, check out the economic calendar.

The S&P continued last week to be volatile but without much direction as it sorts itself out following another test of the 200-day MA and Feb 2016 trend-line. A boost higher out of the coiling range could have the index poised for a test of the trend-line off the highs in the vicinity of 2735. A push back lower will have big support in focus, but for as long as it holds the market will remain neutral at worst. A breakdown with momentum will be required to shift the focus towards another risk-off event. 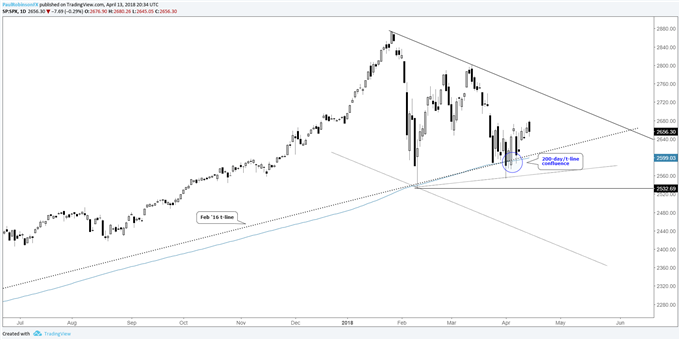 The economic calendar is light in the week ahead outside of ZEW surveys for Germany and the Eurozone on Tuesday. Risk trends will continue to be a theme as the U.S. market continue to try and stabilize. Europe has been a surprising upside outperformer as of late.

Last week, the DAX continued to power higher with little pushback from sellers. In the week ahead, a test of the 200-day may be in store, which lies just above a swing high in February at 12601. At that juncture, a pullback may be store, but the technical posturing certainly has improved, and if the U.S. market joins in then risk appetite may continue to be a boon for the German benchmark in the days ahead. Longs at this juncture look risky, though. 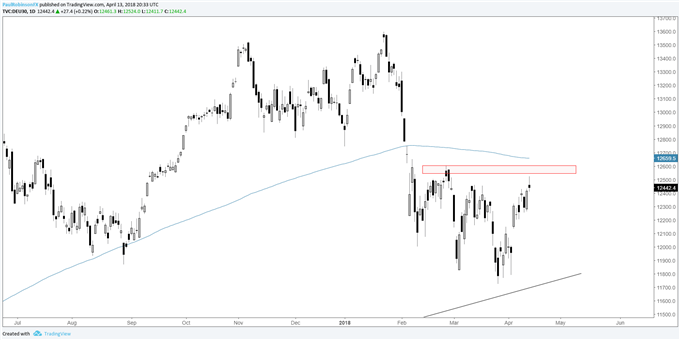 As far as significant economic data, U.K. jobs figures are due out on Tuesday and CPI on Wednesday. For details on timing and estimates, see the economic calendar. Continue to watch general risk trends, globally, as U.K. stock indices continue to impress.

The FTSE spent a couple of days last week doing relatively nothing after surging from under 6900. Straight ahead is a big test, though, around the 7300-mark. A pullback at the least is expected upon a first test of this critical level. Should we see a rejection at resistance, traders will want to watch how the pullback unfolds – constructively (shallow) or with force. A breakout well into the 7300s may see the index up to the 200-day at 7393. 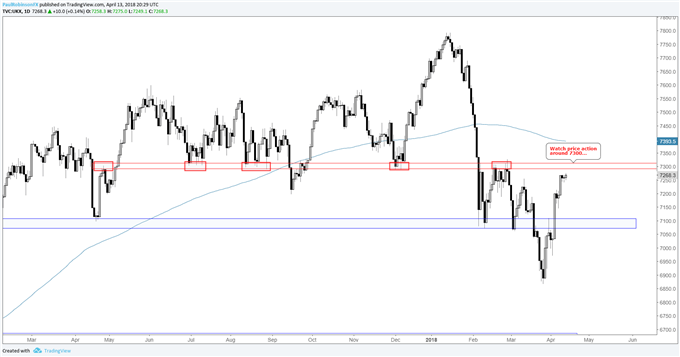