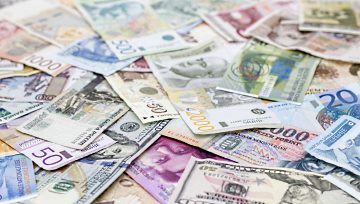 Most ASEAN currencies like the Singapore Dollar and the Malaysian Ringgit fell, albeit modestly, against their US counterpart last week. Renewed fears over the possibility of a trade war between the two largest economies in the world took its toll on sentiment. US President Donald Trump ordered the consideration of additional tariffs against China last Friday.

One standout was the Philippine Peso which stood strong against its US cousin. A CPI report showed that prices rose in the Philippines by 4.3% y/y in March. That was the fastest pace of inflation since November 2011 and it is slowly inching away from the outer band of the central bank’s (BSP) inflation target.

However, the BSP noted afterwards that inflation is expected to decelerate to the midpoint of their target in 2019. While the central bank showed no eagerness to act on the data, they did say that they are “ready to take measures to ensure CPI is on target”. A weaker greenback on last week’s worse-than-expected US jobs report also probably helped the Peso’s case.

Looking ahead, this week is filled with event risk for ASEAN currencies. In terms of local data that is on the docket, on Tuesday we will get February’s Philippine trade balance. Or rather, economists are expecting a deficit of -$3342m which would be larger than January’s -$3317m deficit. According to the BSP, their outlook is for the trade balance is that it should remain manageable. They also forecast a deficit for 2018. With that in mind, perhaps the Peso’s reaction could be restrained.

China will also be release a few key economic statistics that may affect currencies like the Malaysian Ringgit, Singapore Dollar, Philippine Peso and the Indonesia Rupiah. This is because China is a major trading partner of the countries associated with those currencies. On Wednesday we will get China CPI followed by their trade balance on Friday. We may also get their new yuan loans by Saturday, latest by this Sunday.

Turning to Singapore, there are a couple of important events this Friday. First, we are going to get a local GDP report showing the first estimate of growth in the first quarter. However, that could be quickly overshadowed by April’s MAS monetary policy decision which is also on the 13th. The markets are expecting the MAS to maintain its neutral stance of 0% appreciation in the nominal effective exchange rate. We shall see if they have anything to say about the ongoing trade war developments.

Outside of the region, keep an eye out for March’s US CPI report on Wednesday. Headline inflation is expected to tick up to 2.4% y/y. That would be the fastest pace of CPI in a year. Then, later on the same day we will get FOMC meeting minutes from the Fed’s March rate hike. Finally, do keep an eye on how trade talks go on this week. China has hinted that it will respond if the US releases an additional list for product tariffs.

On a daily chart, USD/PHP is being held up by a near-term rising trend line from early February. Simultaneously, it seems to be confined under a falling resistance line. A break below support exposes the February 23rd low at 51.77. A push below that exposes the 38.2% Fibonacci retracement at 51.56. On the other hand, if prices climb above resistance, the next target will be the February 19th high at 52.70, A push above that exposes the 38.2% Fibonacci extension at 52.91. 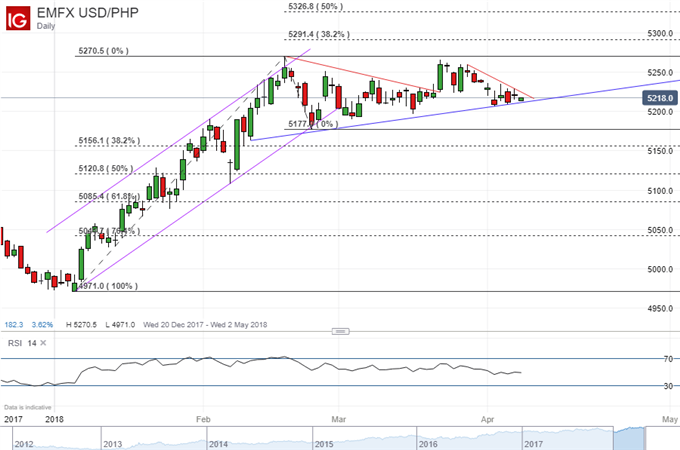 On a weekly chart, you will notice that negative RSI divergence has emerged as USD/PHP tried to push higher towards the end of March. This indicates momentum to the upside is decreasing and could mean that prices may soon turn lower. Confirmation will be needed. 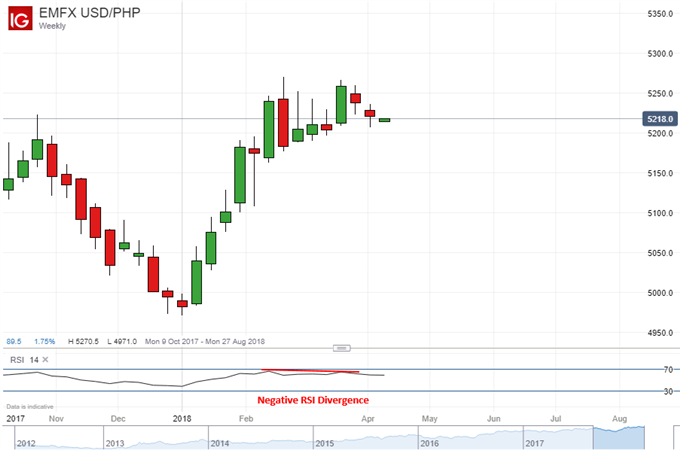