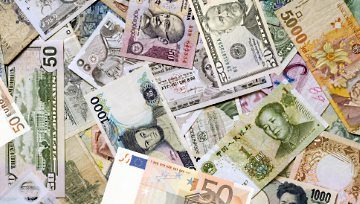 As expected, last week the Philippine Peso didn’t take the news so well that Hong Kong exports rose only 1.7% y/y versus 7.0% expected. That was the weakest outcome since January 2017 and didn’t bode well for the country as HK is one of their major trading partners. Elsewhere, news over the weekend that China’s Manufacturing PMI beat estimates caused the Malaysian Ringgit to gap higher on Monday. As far as this week is concerned, there are plenty of economic updates that can fuel volatility in ASEAN currencies.

In fact, the Indonesia Rupiah is already off to a bad start when the country’s manufacturing PMI fell to 50.7 in March from 51.4. A reading above 50 shows expansion while one below indicates contraction. For the country, manufacturing is a vital component of the economy and poor performance on this end could cause the central bank to react by easing monetary policy.

Looking ahead, ASEAN finance ministers and central bank governors will meet in Singapore from April 3rd to April 6th. They will be covering topics such as sustaining growth, boosting resilience and fostering innovation. Since these countries rely largely on trading, it will be also be important to watch out for any talks about how they will respond or cope with ongoing US and China tariff developments. Just as this week began, the latter country announced that their response to US metal tariffs will go into effect on Monday.

On Thursday, we will get March’s Philippine CPI data. The headline inflation rate is expected to tick up to 4.7% y/y from 4.5%. Since the Philippine central bank inflation target is 3.0% +-1.0%, such an outcome would mean prices continuing to pull away from the outer limits of the target range. This could increase hawkish policy expectations if the markets believe the central bank will raise rates to fight inflation, boosting the Philippine Peso.

Outside of the bloc, keep your eyes peeled for Friday’s US jobs report. Data out of the country has been outperforming relative to economists’ expectations recently. This opens the door for an upside surprise. While the country is expected to add fewer jobs, average hourly earnings will probably be the more interesting section. This is because earlier this year, the highest wage growth since 2009 sparked aggressive risk aversion. In a similar scenario, sentiment-linked currencies can suffer. Given their higher associated yields, ASEAN bloc currencies like the Malaysian Ringgit could be vulnerable.

On a daily chart, USD/MYR has simultaneously broken below a near-term rising line and the 23.6% Fibonacci extension at 3.8804. The pair seems to be eager to make more progress to the downside but there are some obstacles ahead. Namely, the 38.2% level at 3.8238 and then the 50% midpoint at 3.7780.

On the other hand, if prices turn back higher, the aforementioned 23.6% Fibonacci extension could act as new resistance. A push above that exposes 3.9297 which is the high achieved back on March 19th. The next target would be the March 1st high around 3.9401. 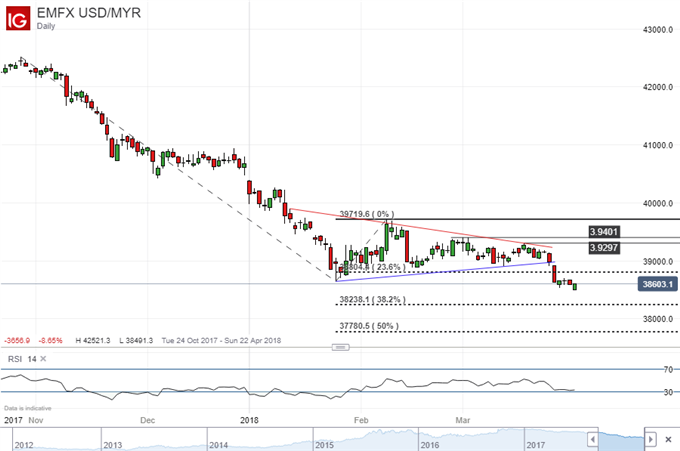 On a weekly chart, you will notice that positive RSI divergence has emerged as USD/MYR tried to push lower. This indicates ebbing momentum to the downside and could mean that prices may reverse higher. 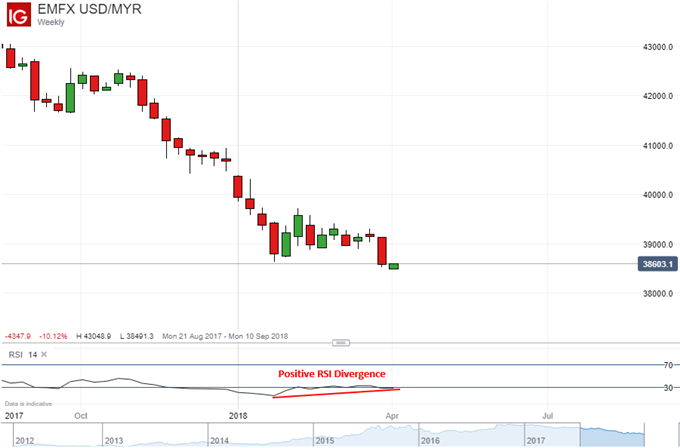