New Zealand Dollar overnight implied volatility are at extreme levels, especially when looking at NZD/USD. This means that the markets are pricing in intense price action over the next 24 hours.

The one-day (1D) reading is at 18.99% which is not only the highest of the majors but also the most since June 2017. That is a nine-month high. In addition, the one week (1W) measurement is also the largest among the majors. Two catalysts likely explain why the markets seem on watch.

Later in the day, we will get March’s FOMC monetary policy announcement at 18:00 GMT and just thirty minutes later is the Jerome Powell news conference. What will make this particular meeting peculiar is policymakers’ forward guidance. This is because back in February, Mr. Powell hinted the possibility of a fourth rate hike by the end of the year. If the central bank echoes his outlook, the New Zealand Dollar could fall as it loses its appeal from a yield perspective relative to the US Dollar.

Speaking of yields, just two hours after the Fed rate decision is the Reserve Bank of New Zealand’s turn. Throughout most of the first quarter, markets’ expectations of an RBNZ rate hike by the end of the year have been falling from almost 80% certainty to just a hair above 30% confidence. During this time, both the New Zealand CPI and GDP report for the fourth quarter missed expectations.

In February the central bank reiterated that it is in no rush to raise rates. Given that Adrian Orr will become the new governor effective on March 27th and that the RBNZ will add targeting full employment to their mandate, it seems that they may continue reiterating their patience on rates as it goes through a regime change. So with that in mind, the central bank could disappoint some of the remaining near-term hawkish bets. In that case, the New Zealand Dollar could be at risk.

On a daily chart, NZD/USD has been declining as expected after the formation of a dark cloud cover technical pattern. However, there are some obstacles ahead if it does want to keep falling. Up first is the trend line from September 2015. This line has acted as both support and resistance in the past and we will see if it can continue to do so.

Beyond that is the “day range low” at 0.7102 which is closely aligned with the 50% level of the Fibonacci retracement. A break below that exposes the “week range low” at 0.7067. On the other hand, prices may reverse higher and in that instance, they will face the “day range high” at 0.7244. A push above that exposes the “week range high” at 0.7279 which is also closely aligned with the 23.6% retracement. 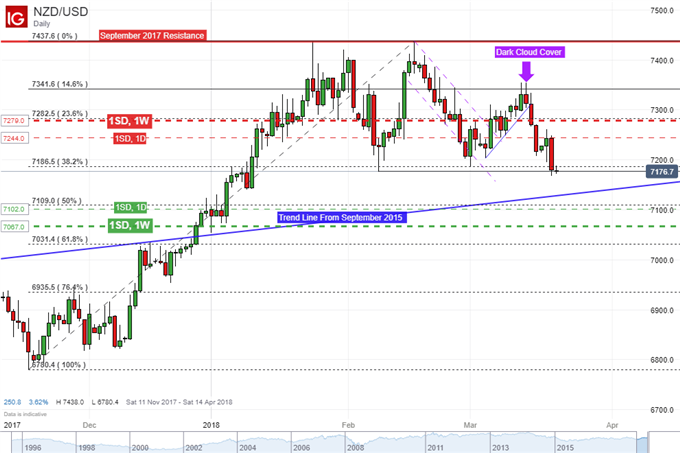