EUR/USD Reversal Pattern on the Horizon? Is Volatility Underpriced?

How will this EUR/USD chart setup be impacted by the ECB? Join the webinar to follow the rate decision live!

At a quick glance, EUR/USD near-term implied volatility is elevated but more forward looking estimates could be underpriced. The one-day (1D) reading, which is noted on the chart below, stands at about 12% which is the highest in more than a month. The similar one-week (1W) measurement is one of the weaker readings of the majors at just 8.35%. Could the markets be too complacent despite potential political risk?

For other FX implied volatility articles, check out the Binaries page.

You can find the likely source of near-term risk from the upcoming ECB monetary policy announcement. While no changes in rates are expected there, the markets will be tuning in for a fresh set of economic projections and commentary on what could happen to their QE program which is due to run until September. What’s interesting is that overnight index swaps are pricing in a 23.5% chance that the central bank will raise rates by December. This has been falling from 46% confidence since their last rate decision.

The Euro’s appreciation on the whole in 2017 could have negative implications for inflation, in fact the most recent Eurozone CPI figures showed the headline rate at 1.3% in January. This is the lowest outcome since July 2017. As Senior Currency strategist Christopher Vecchio mentioned, prices running well below the ECB’s target makes it seem inevitable that Mario Draghi pushes back from an early exit to their purchase program.

Meanwhile the Italian election has left the country with a hung parliament. No single party or coalition managed to gain enough seats for one. However, the eurosceptic Five Star Movement (M5S) took the medal of gaining the most votes for a single party at 33%. The right-wing coalition bloc took the most votes at 37%. The Euro was rather calm on the news, but it seems like it could yet be awaken.

This could depend on what grand coalition or alliance forms in the aftermath of the election. Matteo Salvini, the leader of the far-right League and the largest party in the right-wing bloc, did announce that he is not interested in forming an alliance with the eurosceptic party. A major government that incorporates the Five Star Movement presents itself as a rather prominent risk for the Euro.

This is because in the past, this party has advocated for leaving the Euro. However, this message was dropped prior to the election by Luigi Di Maio, the party’s current leader. He said that “I believe it is no longer the right moment for Italy to leave the Euro”. This begs the question if Mr. Maio will bring this topic back up in the future. With that in mind, let’s take a look to where volatility may take EUR/USD.

On a daily chart, EUR/USD has been trading sideways for the majority of this year so far and appears to be heading for what could be a formation of a triple top reversal pattern. However, getting there involves overcoming an obstacle. The “day range high” at 1.2487 stands in the ways as what could be resistance over the next 24 hours.

Beyond that lies a trio of what could halt the pair’s progress to the upside since March 1st, which could help form the pattern. The ‘week range high” at 1.2553, which is closely aligned with the 38.2% Fibonacci extension, seems like what could be a stubborn barrier. In addition, the falling trend line form July 2008 adds another layer of interest.

On the other hand, if prices immediately turn lower, the “day range low” at 1.2331 might end up as support in the near-term. A break below that expose the “week range high” at 1.2265, there is a 68% chance that prices will remain within this level over the next five trading days. 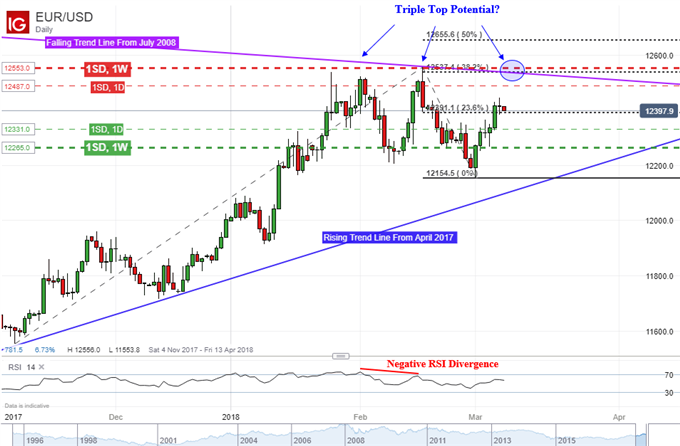 On a weekly, chart you can see the convergence of the short-term and long-term trend lines. EUR/USD’s uptrend since December 2016 has been met with negative RSI divergence as it tested the July 2008 line. This is a sign of ebbing momentum to the upside. 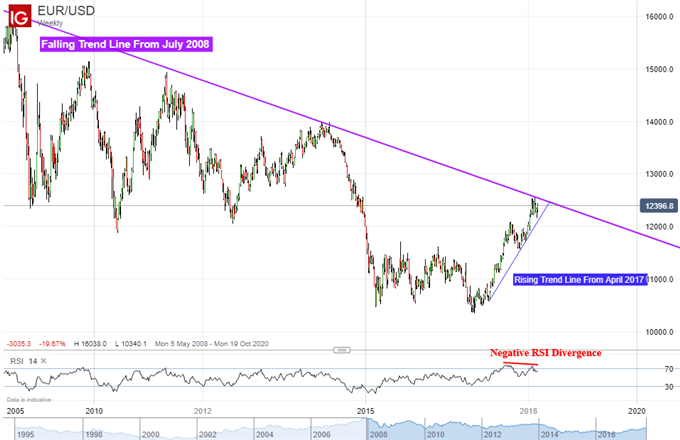