AUD/USD Implied Volatility Elevated Ahead of RBA and Trade Talks

The markets are bracing for what could be some elevated price action in the Australian Dollar based on options-derived calculations. One-day (1D) AUD/USD implied volatility stands at its highest since February 14th at 13.70%, the most of the major pairs. The one-week (1W) reading is also elevated at 9.75%. A combination of incoming local economic and ongoing political risk seem to be the source of worries.

On Tuesday, we will get the Reserve Bank of Australia rate decision followed by a speech from Governor Philip Lowe. While no rate change is expected, the markets are pricing in a better-than-even chance of 56% that one hike may be upon us by the end of the year. Mid-February, Mr. Lowe argued that there isn’t a strong case for a near-term monetary policy adjustment. With that in mind, the markets will be looking for any signs of when the central bank might start acting. A more status quo delivery risks further cooling hawkish bets.

The following day, Australia’s fourth quarter 2017 GDP figures will cross the wires. Economists are estimating growth to slow down to 2.5% y/y from 2.8% in the third quarter. Data out of the country has been disappointing relative to predictions since mid-January which opens the door for another unpleasant surprise here. However, if the central bank expects such an outcome, which could be noted in Tuesday’s monetary policy announcement, then the Australian Dollar could brush it off. We shall see.

Meanwhile on the external front, ongoing developments about what the global trading environment could look like in the near-term poses as a risk for the sentiment-linked currency. Since the announcement of steel tariffs by US President Donald Trump, retaliatory measures and considerations were announced from other nations. For example, on Friday EU said that it will “react firmly to Trump’s tariffs”. Asian stocks haven’t fared so well since then. The Nikkei 225 and ASX 200 fell deeper into the red by the end of the week, dampening the appeal of the Aussie Dollar and sending it lower.

With that in mind, let’s see where AUD/USD could go in the near-term.

On a daily chart, AUD/USD has failed to budge since breaking below the lower horizontal line of a descending triangle formation. The pair seems to be stuck just above the 61.8% Fibonacci retracement level at 0.7744, which stands in the way as immediate support.

On the other hand, immediate resistance appears to be the “lower horizontal line” at 0.7788 on the chart below. A push above that exposes the “day range high” at 0.7820 which is in line with the 50% level. 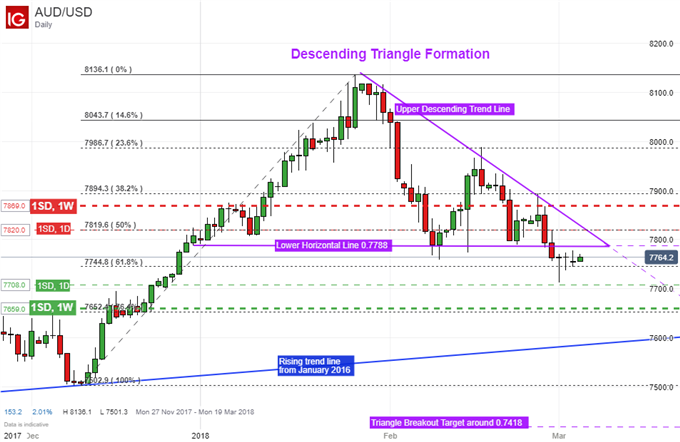