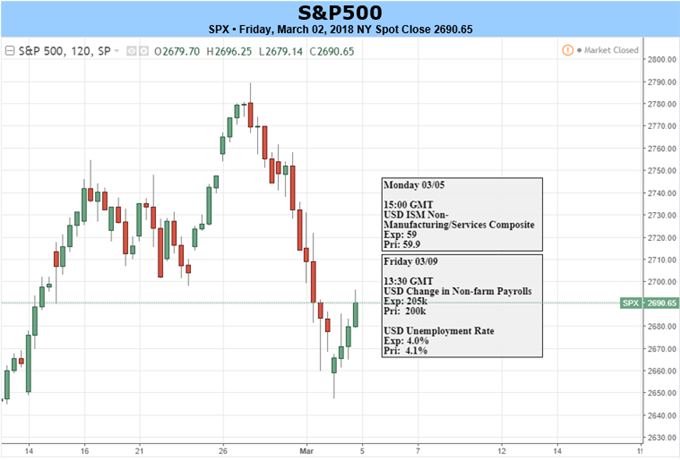 In the week ahead, there are a couple of items on the data docket, starting with ISM Non-manufacturing on Monday, however; the big event of the week arrives on Friday with the release of the February jobs report. The consensus estimate for NFPs is +195, following +200k in January. The unemployment rate is expected to tick lower to 4.0% from 4.1%.

After one more push higher on Monday the market fell apart through the remainder of the week, with a small rebound on Friday. As we pointed out earlier Friday, what happens next could be very important as the decline could deepen into a sizable sell-off. The big notable line of support arrives at the Feb 2016 trend-line coupled up with the 200-day MA. A move down to support might find buyers initially, but it will be the second time in the month the market has suffered stiff losses quickly, and investor confidence may quickly erode soon should the market sink that deep again. 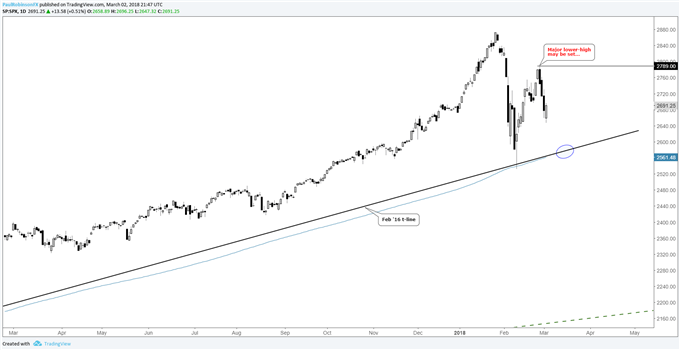 There aren’t any ‘high’ impact data events scheduled for release this coming week, but on Thursday the ECB meets. Traders will be keying in on what could be next for the central bank and how the euro responds. Both the single-currency and DAX have been on the decline, so it is unclear how much impact a euro reaction may have.

Last week, the DAX plunged hard from a bear-flag after struggling to garner much momentum to the top-side. It closed last week right at support in the vicinity of 11935/868. If support fails to provide a lift, look for the slide to extend, and even if a rally from support develops depending on how much buying interest is sparked we could still see the downtrend continue lower. There is trend-line resistance off the record high and daily lows from early Feb to contend with. 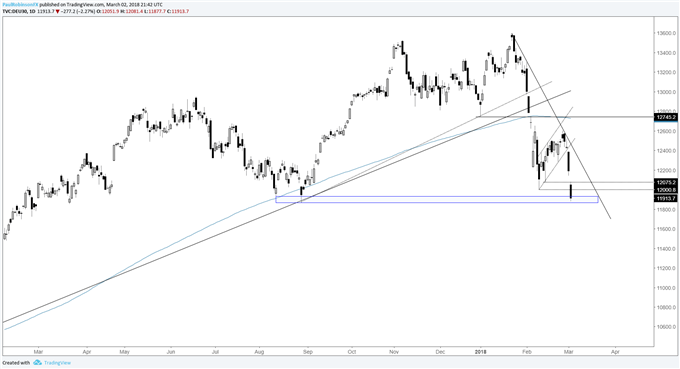 The calendar is light for the UK, but as per usual there are ongoing risks on the ‘Brexit’ headline front. Risk trends could be the dominating factor in the week ahead as global markets start wilting once again.

The FTSE found stiff opposition once again around the 7300-threshold, a level we noted as important resistance. The drop to end the week pushed the market below the 7100-line and 2016 trend-line, setting the footsie up for more losses. Looking lower, there is slope support from 2016 down around 6900, but no real price levels until below 6700. 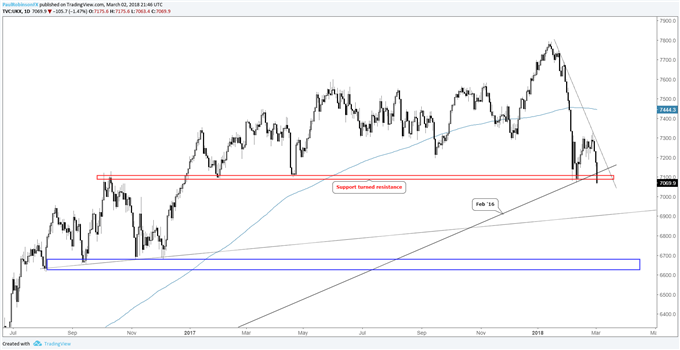