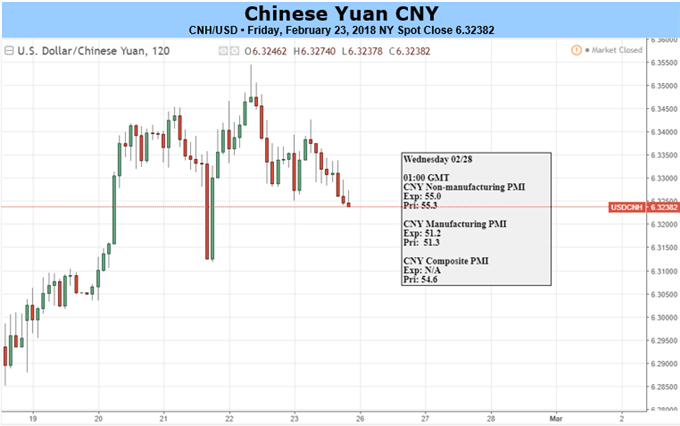 How to plan your trade wisely in a turbulent market? Read DailyFX’s Top Tips.

The Chinese Yuan lost against the U.S. Dollar in the offshore market this week, after ten consecutive gains. The onshore market was closed for the Chinese New Year holiday and reopened on Thursday. Looking forward, the focus will shift to China’s annual two parliament meetings, which will kick off in a week. In terms of event risk, Caixin and official PMI prints are worth to keep an eye on.

China’s National People Congress (NPC) meetings will start on March 5th and ChinesePeople’s Political Consultative Conference (CPPCC) will begin on March 3rd. One of the most important events on the agenda is that Premier Li Keqiangwill release the growth target for 2018, as well as other economic goals. In last October, the country announced to shift focus to the quality of growth, after targeted at the growth rate for decades. Thus, how China will set the annual target this year is in the spotlight: whether a specific growth rate will be set, or it be a rough number like “around 6.5%” in 2017, or it will be a range like “6.5%- 7.0%” in 2016; also, how the quality of growth will be evaluated. These questions will not only impact the outlook for 2018, but also will set a benchmark for the following years.

In addition to the growth target, the fiscal spending target will largely weigh on the economic outlook as well. Since late 2016, China has changed monetary policy from loose to neutral, amid increasing financial risks. The PBOC has reiterated that the monetary policy will be held prudent and neutral in 2018. Within such context, fiscal policy has become the primary tool for boosting the economy. In recent years, China fiscal deficit ratio has been rising quickly: it rose from 2.1% in 2014, to 2.3% in 2015 and then to 3% in 2016 and 2017. As 3% is considered to be a “red line” by many Chinese economists and officials, the fiscal deficit ratio in 2018 is more likely to stay unchanged. Then, it will require the government to use its money more wisely and come up with convincing plans. A higher ratio, on the other hand, will have the government bear elevated risks, when it is already facing many. Either case will likely add volatility to markets.

Both the official and Caixin manufacturing PMI prints for February are expected to drop from the month prior. Chinese New Year holiday could be a major reason for the declines according to historical records. Also, January and February PMI reads often see drops due to seasonal factors. In order to get an in-depth understanding of China’s manufacturing industry, the aggregate indicators may no longer be sufficient. The five components of each indicator could help: new orders, output, employment, supplier’s delivery times and stock of purchases. For instance, output may fall because of the holiday but if new orders increase significantly, that means the production in the coming months may improve and is a good sign. 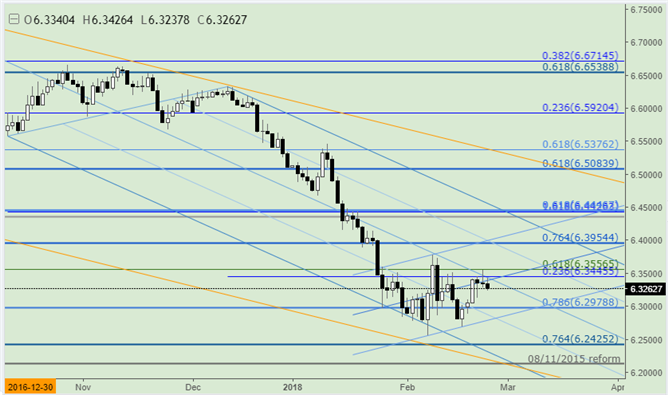 From a technical point of view, the USD/CNH held the downward channel started from last December and was testing 6.3545-6.3555 resistance zone (support for the Yuan). It may continue to retrace in a range between 6.3954 and 6.2425 in the near term.