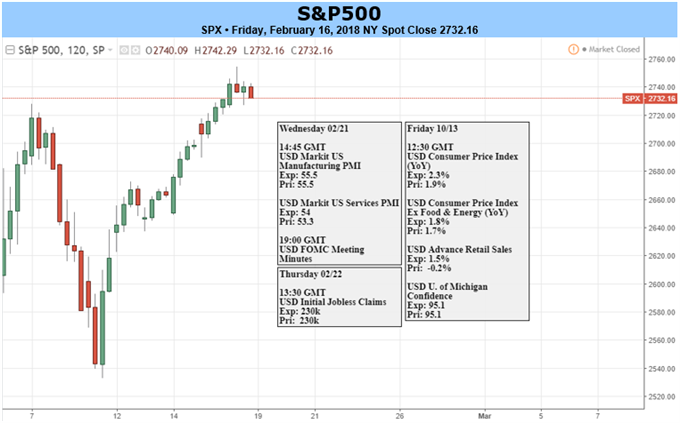 To start the week, markets will be closed on Monday in observance of President’s day. Turning to the economic calendar, the only ‘high’ impact release will come on Wednesday with the FOMC minutes from the January meeting. It’s not expected to be a big market-mover, but traders should be on their toes none-the-less. For all data releases, see the economic calendar.

The S&P 500 had an impressive rebound last week, but may be at important cross-road as the possibility of a significant lower-high is in the cards. However, if we don’t soon see the index turn, then the old highs could soon come into play shortly. Whether the market is headed higher or lower look for a period of churning as some testing of the bounce gets underway. Either way, next week should see more two-way trade. 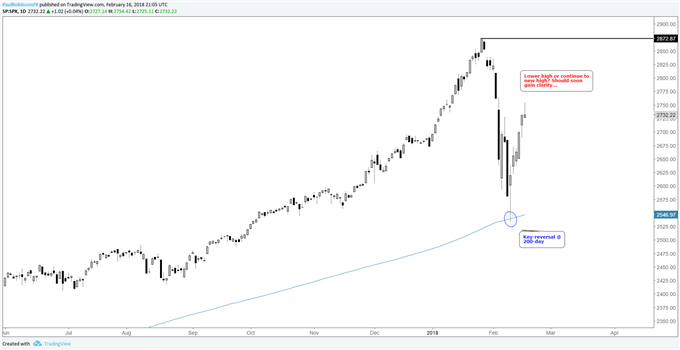 Looking ahead to next week the calendar is relatively light, with the only ‘high’ impact data set to be released is on Tuesday with Zew surveys for both Germany and the Eurozone. Uncertainty surrounding Germany’s political future and general risk trends will be dominant themes.

The DAX hasn’t seen the same kind of buying we saw in the U.S. markets or in Europe in general (the CAC experienced a much larger bounce.) There is room for the German benchmark to play catch-up if risk continues to rally, but in the event we see it wilt again look for the DAX to be a leader to the downside. On the top-side the area of interest from the standpoint of resistance doesn’t arrive until near 12750. On the down-side, the Wednesday reversal low is first up as support (12075), followed by 12k, then 11935/868. 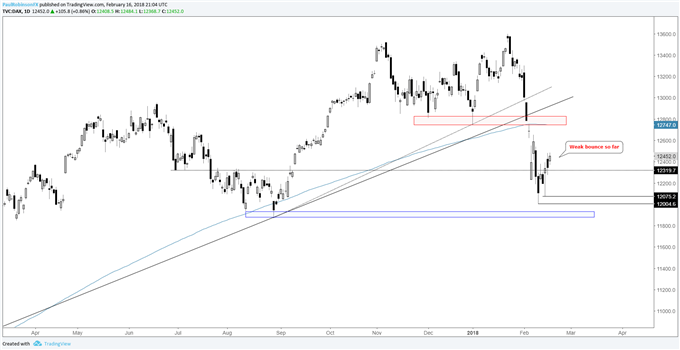 As is the case with other regions of the world, there isn’t much to get excited about in terms of scheduled events. On Thursday, UK GDP for Q4 will be released. ‘Brexit’ headlines, of course, are always a threat.

The FTSE bounced hard last week from around the 7100-threshold, but headed straight away into big resistance surrounding 7300. This is the first big test of the rally and could present problematic to start with. Clearance above 7300 doesn’t put the footsie in the clear, but does open up a path for further gains towards the 200-day at 7454. A turn lower will have the all-important 7100 level in focus. 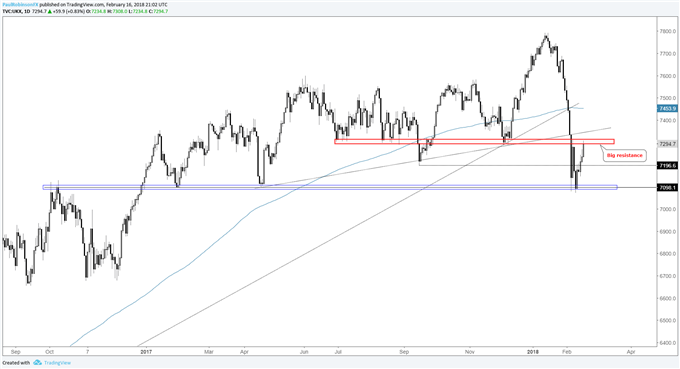