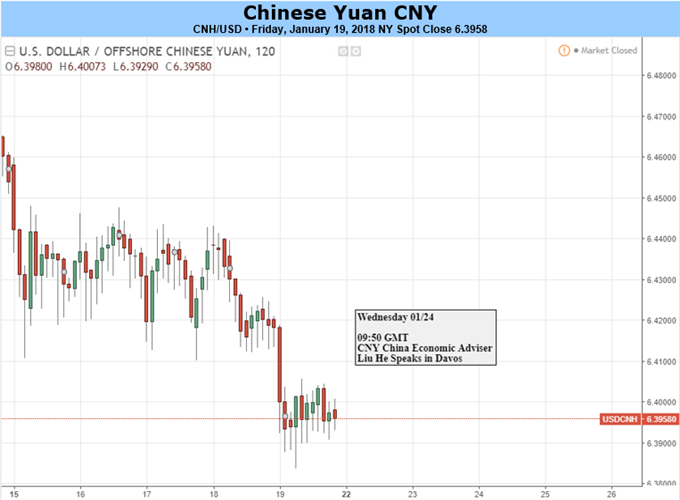 How do other traders long/short a pair? See real-time IG Sentiment.

This week the Chinese Yuan set new high levels against the U.S. Dollar since the end of 2015: The USD/CNH dipped 6.3882 in the offshore market and the USD/CNY traded as low as 6.3875 in the onshore market. Looking forward, China has a light economic calendar. A major risk will come from disagreements on trade practices between China and its U.S. counterpart. A trade war or even talks on a trade war could hurt the Chinese currency. In terms of domestic drivers, PBOC’s guidance will continue to weigh on the Yuan, as well as on cryptocurrencies.

Trump administration will decide by the end of this month whether to impose trade sanctions against China, according to Nikkei. The U.S. President has vowed repeatedly to cut U.S. trade deficit to China over the past year. U.S.’s new record-high deficit to China, which came in a week ago, could have escalated tensions. During the Monday talk with Chinese President Xi, Trump said that “the situation is not sustainable”. The odds of the U.S. to take action has increased. We discussed that trade conflicts may hurt China more than its counterpart, and thus, will be bad news for the Yuan.

Then where to find clues about such actions? Next week, Trump will attend the annual World Economic Forum in Davos and deliver a speech about “America First”. He is likely to talk about trade issues. On the other hand, China has played down the event this year. The delegate that China sends to Davos in 2018 is a senior official in the central economic committee, while from 2015 to 2017, Chinese Vice President, Premier and Chinese President attended the event respectively.

In additional to uncertainties in trade, China’s domestic policies will continue to play a role. The PBOC strengthened the daily reference rate for the Dollar/Yuan to 6.4169. Yet, this is still nearly 200 pips away from the USD/CNH level at Friday close. A confirmation is needed from the regulator for the Yuan to advance further. Also, the PBOC announced a new measure to promote the cross-border Yuan settlement. The regulator’s focus is to increase the use of the Yuan and maintain the Yuan relatively stable.

The PBOC introduced further crackdown on cryptocurrencies this week. Payment platforms are forbidden to process any transaction for cryptocurrencies and are required to cease any violation immediately. Chinese online Bitcoin platforms were shut down after the regulator announced it illegal in China last September. The ban released this week aims to prevent Chinese trading cryptocurrencies through overseas online exchanges. 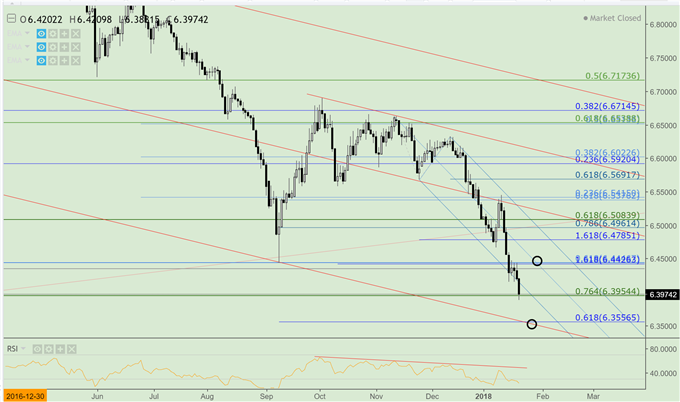